With an estimated 20 million new drivers on the road each year, China has long struggled to control its CO2 emissions, air pollution, and traffic problems. 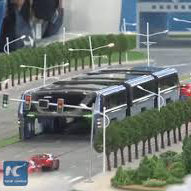 YouTube/Xinhua
But a Beijing-based transit company is planning to test a new straddling bus this summer that could provide some relief, according to Chinese news agency Xinhua. The bus, which can carry up to 1,400 passengers, hovers above the road, letting smaller vehicles pass underneath. Because it operates on existing roadways, the system is much cheaper to build than underground subways, while carrying the same number of people. The idea of a straddling bus has been around since 1969, but has remained a far-fetched concept until recent years. A model of the system, designed by Transit Explore Bus, was unveiled at the International High-Tech Expo in Beijing this month. The company plans to build and test an actual straddling bus in Changzhou this summer.