In 1968, during the six-month siege of Khe Sanh — one of the most bitterly fought battles of the Vietnam War — a special U.S. Air Force outfit flew defoliation missions. Called the Ranch Handers, their motto was: “Only you can prevent a forest.”

They may not have succeeded in their goal, but rapid development in Vietnam and the surrounding nations of the greater Mekong region is on the way to accomplishing what American defoliation missions could not: The widespread destruction of Indochina’s forests and the biodiversity they harbor.

Stand on Khe Sanh today, and it’s remarkably tranquil. Nearly all the metal from the old Marine base has been scavenged and sold to scrap merchants. The battlefield is now part of a vast green coffee plantation; all that remains of the airstrip that was the lifeline for U.S. Marines and Army soldiers is a length of reddish dirt. 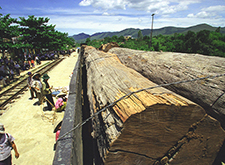 The fate of the forests around Khe Sanh exemplifies what is happening today in Vietnam and the greater Mekong region, which also includes Thailand, Laos, Cambodia, and Myanmar. Although some large blocks of forest remain intact, the pace of deforestation is dizzying, threatening the region’s remarkable biodiversity, which includes more than 1,700 species discovered in the last 15 years alone. Many of the forests in Vietnam have been cut down for the furniture export market and the trees replaced by coffee bushes; in less than 10 years, Vietnam has gone from zero to number two in global coffee production. So much forest has been cleared to feed the growing number of sawmills that loggers have moved across the borders into neighboring Laos and Cambodia, where they are illegally razing forests there.

In addition to widespread, illegal logging, other factors driving this precipitous forest loss include the spread of agriculture in a region with soaring population growth and the construction of dams and other large-scale infrastructure projects.

The scope of the forest loss was highlighted earlier this month by the conservation group WWF, which noted that from 1973, near the end of the Vietnam War, to 2009, the greater Mekong region lost nearly one-third of its remaining forest cover. Vietnam and Thailand suffered the most forest destruction, each losing 43 percent of their forest cover, according to an analysis of satellite imagery by WWF.

WWF concluded that areas of core, undisturbed forest — defined as at least 3.2 square kilometers of pristine woodlands — plunged over the past four decades in Indochina from more than 70 percent to 20 percent. I witnessed this destruction first-hand as I traveled around Vietnam for several months, researching a book on its biodiversity. While hiking near the mountain village of Sa Pa, near the Chinese border, I saw mile-long red clay scars on the sides of the green, tree-covered mountains — the highest in Vietnam. The land was being clear-cut for a controversial new dam, displacing many of the local Dao tribespeople in the process.

Vietnam and Thailand have lost 43 percent of their forest cover in the past few decades.

In another part of the country, a few hours from Hanoi in the Red River delta, a wildlife biologist and I could see the remnants of famous limestone-rich hills that had been pulverized to feed a nearby cement factory. The factory was located close to the Van Long nature reserve, home to one of the last bands of wild, leaf-eating monkeys known as “Delacour’s langurs.”

Scientists and conservationists working in Vietnam and surrounding nations say the region now stands at a crossroads. It can allow present rates of deforestation to continue, in which case, WWF says, by 2030 “only 14 percent of the greater Mekong’s remaining forests will consist of contiguous habitat capable of sustaining viable populations of many wildlife species.” Or Vietnam and its neighbors can take advantage of the natural bounty that remains — forests still cover roughly 50 percent of the region’s land area — and choose a more sustainable path that will support reasonable economic development and preserve biodiversity.

The remaining forests in Vietnam are home to what was virtually a “lost world” containing wildlife unknown to the outside — so much biodiversity that for the past 15 years an average of two new species per week have been discovered by scientists. Some of these creatures are spectacular, including the Javan rhino, barking deer, fishing cat, ferret-badger, finless porpoise, Irrawaddy dolphin, giant Mekong catfish, and a creature called the saola, which looks like a goat but is genetically closer to an ox.

The remaining forests of Vietnam are home to a ‘lost world’ of biodiversity.

One University of Hanoi biologist, Vo Quy, eminence grise of Indochina conservation, is convinced that many other creatures are still waiting to be found. “Local people are always finding things that we scientists don’t know about,” he said to me.

But things are changing swiftly in Vietnam, which — at 127,240 square miles — is only a little smaller than Germany. In Vo Quy’s words, when it comes to protecting the region’s wildlife, “the peace is more dangerous than war.”

With the country opening up to the outside world under an economic restructuring in the mid-1990s, Vietnam’s economy has been growing by an average of 7 percent a year for the past decade. Like many countries in the region, Vietnam has a young and rapidly growing population, which has expanded by nearly one-third since 1979, reaching nearly 90 million today. (In the region around Cuc Phuong National Park, Vietnam’s first national park and home to many conservation efforts, the average family has 6.7 children.) 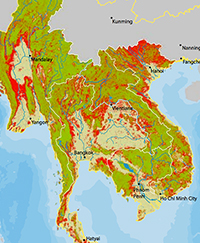 The inner workings of this rapid growth are not pretty, especially if one looks into the furniture export trade, one of the country’s top five export earners and a major cause of the deforestation. (The United States is by far Vietnam’s biggest furniture market, almost three times larger than the next largest, Japan. Imports from Asia now make up 70 percent of the American furniture market, a 4,000-percent increase in less than ten years.)

Vietnam has even weaker unions and lower wages than China, along with fewer labor laws, heavier subsidies to state-sponsored industries, and bigger tax breaks to favored companies. Consequently, furniture manufacturers in China are already moving their operations from industrial cities near Hong Kong to Vietnam.

While the mills are in Vietnam, about 80 percent of the wood itself comes from neighboring Laos and Cambodia. Much of the timber is cut in protected reserves in those countries — where laws are weak and enforcement is minimal — and illegally smuggled across the border to Vietnam in spite of export restrictions, according to an undercover investigation by the London-based Environmental Investigation Agency (EIA).

In a 2008 exposé, the EIA documented the timber industry’s severe deforestation of the greater Mekong region.

The organization’s field investigators made secret films during undercover visits to furniture factories and found that “criminal networks have now shifted their attention to looting the vanishing forests of Laos.”

“With furniture exports worth $2.4 billion a year to Vietnam alone, authorities turn a blind eye to illegal logging.”

But because the furniture export trade is worth more $2.4 billion annually to Vietnam alone, authorities turn a blind eye, according to the EIA. Corruption, large and small, has accompanied boom times.

One wildlife biologist, Tilo Nadler, director of the Endangered Primate Rescue Center in Cuc Phuong, witnessed long lines of trucks loaded with tropical hardwood at the Cambodian border, on their way to factories near Da Nang and Ho Chi Minh City. Nadler said that even in his area, far from the border, local attitudes toward protection were so bad that a mob had attacked a ranger station three years ago after the rangers had arrested some illegal loggers. Rangers earn little money and have low status, he said.

The impacts of this wholesale devastation are substantial in one of the world’s biodiversity hotspots. As the WWF report rightly notes, there have been enormous declines in the range and numbers of several of the region’s iconic species, including the tiger, Asian elephant, Irrawaddy dolphin, and saola. Where once there were thousands of saola, now there are hundreds. The population of Asian elephants has dropped from hundreds to dozens. Rangers used to sight tigers roaming Cuc Phuong — which has been cut in two by a highway — but no more. And in 2011, the Javan rhinoceros was confirmed as extinct in Vietnam. 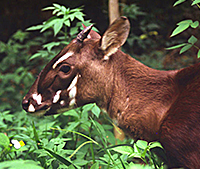 The saola, often called the Asian unicorn, once numbered in the thousands; now there are hundreds. DAVID HULSE/WWF

According to Nadler, biologist Vo Quy, WWF, and other experts, time still remains to reverse the runaway deforestation and habitat loss of recent decades and begin better preserving the greater Mekong region’s forests and biodiversity. “I’m an optimist, but only if we have real government support to protect our special places,” Nadler said. He cited the need to make difficult decisions, which may mean that biologists have to give up resisting a dam such as the one at Sa Pa, in order to save threatened wild lands elsewhere.

WWF said governments in the region need to do a far better job of safeguarding the parks and reserves that already exist since “many protected areas exist in name only.” The group also stressed that unless regional government begin to rein in illegal logging and uncontrolled development, “natural forest habitats, along with their resident wildlife, face virtual elimination outside of protected areas.”

Although the Vietnamese government has heralded its reforestation efforts, the fact is that they largely consist of monoculture tree plantations that harbor limited biodiversity, scientists say.

A key factor is local community involvement. The Van Long park, for example, was created as a result of local initiatives. Villagers living next to Van Long take a sense of pride in the reserve and have an economic stake in an ecotourism resort being built there.

In Southeast Asia, any long-term, sustainable, conservation projects require popular support; without that, formal edicts or restrictions on timber cutting from the central government mean nothing.

As a popular saying goes in Vietnam: “The decrees of the emperor end at the village gate.”