As I write this piece, we’re in the midst of a (biodiesel) road trip to Washington, D.C., towing behind us an unwieldy piece of history: a solar panel off the roof of the Carter White House. It’s decades old, though it still makes hot water just fine. In a sense, we’re traveling backward—which in another sense is what I think we’re going to have to do for a while in the U.S. climate movement.

The bad news everyone knows. The strongest attempt ever to pass climate legislation through the U.S. Congress came up short earlier this summer. The inside-the-Beltway green groups took what seemed to be the route of least resistance: a very tame piece of climate legislation larded with special prizes for special interests. They worked it as hard as it could have been worked—and in the end it didn’t even come close. The fossil fuel industry and their allies in D.C. barely had to break a sweat shooting it down.

So—barring some unforeseen development—we’re not going to see significant action on the federal level about climate for at least the next two years.

The solar panels need to be up on the roof, as visible as the White House garden.

And that means we’re far less likely to see significant international action on climate, since it’s hard for other governments to muster the political will to make tough choices when the U.S. is punting.

So what do we do with those two years? I think we use them to build a movement, which explains the solar panel we’re hauling south from Maine.

The story is painful even to consider. This panel went up on the White House roof in 1979, with then-president Jimmy Carter (in a wide tie, and with a bushy haircut) promising that it would still be there in the year 2000, producing hot water from the sun for whoever was then president. In fact, it didn’t make it through the next decade—it came down in the Reagan years, a symbol of our decision to turn away from the idea of limits and veer sharply down the path we’ve trod ever since. 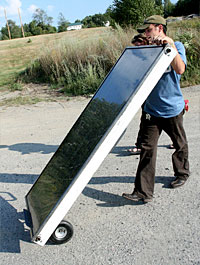 Mark Tardif
The Carter-era solar panel in Maine, being readied for the trip back to the White House.

But not everyone went along. Frugal folks at Unity College in Maine salvaged the panels, and put them up on the cafeteria, where they continued to produce hot water for the next three decades. Meanwhile, around the world other nations took the technology and went to work. Germany and Japan took over the lead in photovoltaic panels, but solar thermal technology like this became the special province of the Chinese.

I sat not long ago with Huang Ming, China’s leading solar entrepreneur, in his space-age Sun Moon Mansion in Shandong Province looking over the stats: his HiMin Solar Energy Group has put up 60 million such systems across China—he estimated that when 250 million Chinese take a shower, the hot water is coming off their roofs. In a biting symbol of that passed torch, he keeps one of the Carter panels in his private museum.

There’s no question what we should have spent the last few decades doing. But there’s no point now in crying about why we didn’t: the only job is to try to get back in the game, to start catching up.

Some of that means spending the money so that we can make the next technological discoveries. Many, including the Breakthrough Institute and Bill Gates, are calling for big increases in R and D funding, which might help us somehow claw our way back toward the front of the parade.

But catching up also means making use of the technology we already have, in ways both practical and symbolic.

President Obama is up against tough odds in Congress. But they can’t filibuster his roof.

We’re headed for the White House with this old panel, and with a promise from the U.S. company Sungevity that it will supply all the brand-new panels the president could ever want—as long as he puts them up on his roof where everyone can see them. George W. Bush, amazingly enough, actually put some solar back in the White House grounds—on the roof of a maintenance shed, and on, who knew, the Presidental Spa and Cabana. But since he didn’t tell anyone, they didn’t do much good. We want them up there on the roof, as visible as the White House garden, which helped boost seed sales 30 percent across the nation the year Michelle planted it.

So far, we haven’t heard a word from the White House about whether they’ll accept the gift and make the promise or not—which, frankly, surprises me. I can’t think of a clearer win for the president, a better reminder to the legions of young people who worked on his campaign that he is still focused on the future. He owes environmentalists more than he’s given them—by all accounts he decided not to push for the Senate legislation. He’s up against tough odds in Congress, of course, given the obstructionist GOP. But they can’t filibuster his roof.

What’s especially poignant is that we have gotten promises from other, much less likely, world leaders—Mohammed Nasheed, for instance, president of the entirely Muslim and quite poor Maldive Islands, the low-lying Indian Ocean nation that faces inundation from rising seas.

The point of the solar panels is to help build the movement that we allowed to wither away.

He took the Sungevity offer, and he’ll be putting solar panels on his roof on October 10 (10-10-10), the same day that thousands of groups around the world will be participating in a massive Global Work Party, putting up wind turbines and laying out bike paths. The same day we want Barack Obama, sleeves rolled up, out on his roof with a wrench.

The point of all these panels, of course, is not that we’re going to solve climate change one roof at a time. (Obama is doing lots of good practical things already—his “greening the government” effort is retrofitting federal buildings across the country with insulation, for instance). The point is that they help build the movement that we allowed to wither away.

Environmentalists lost sight of just how big a movement that would need to be. Too many groups convinced themselves that they could slide some legislation through Congress, make deals with industry, get things going without a fight. It was worth a try, but it didn’t work—the fossil fuel industry, the most profitable enterprise known to man, beat us. And they will beat us again and again until there’s a real, broad-based, popular, noisy movement underway in this country, a movement that can provide a currency (bodies, passion) equal to the currency the billionaire Koch Brothers can pony up to defeat climate legislation.

Some of that movement will go on at the local level, as we transform cities and towns and show what can be done. Some will be done on college campuses like Unity College, or Middlebury where I teach, which are showing the way forward. Some of it will be done in jails—I’d be very surprised if civil disobedience doesn’t become a bigger part of this battle in the years ahead, if only because it’s the tool we use to show our society how urgent, morally and practically, this crisis really is.

But some of it must be done symbolically. And there’s no more symbolic piece of real estate on this continent than the White House. Let’s hope that on the 10th of October it, at least, is transformed. It’s been a long, hot summer, in the capitol as in much of the northern hemisphere. Let’s make sure that next year that heat is put to some purpose—heating the Obamas’ bathtub, and helping power up a movement.