Twenty years ago, I first proposed a ban on international trade in Atlantic bluefin tuna. The population that breeds in the Gulf of Mexico was down by about 80 percent. The population that breeds in the Mediterranean was down by half. Now, things are worse, and the principality of Monaco has made another proposal to ban international trade in this species. It is gaining momentum, and on March 3 the United States announced its support for the initiative. The European Union, which has been wavering in the face of pressure from its fishing industry and Japan, should now end its fence sitting and get behind this proposal.

Such a trade ban is enacted under a treaty called CITES (Convention on International Trade in Endangered Species). CITES is why, for instance, there’s a ban on ivory (which is why there are still elephants in Africa).

Photo by Gavin Newman/AFP/Getty Images
Bluefin tuna reach weights of more than 1,000 pounds and migrate the full length of the Atlantic.

The bluefin is an awe-inspiring creature, a warm-blooded fish capable of swimming at highway speeds, crossing oceans, and reaching weights well over a thousand pounds.

Because bluefin tuna fishing worldwide is driven by prices paid in Japan, where individual fish have sold wholesale for up to $175,000, every population is depleted. A population in the tropical Atlantic, which in the 1960s had yielded the highest-ever catches of bluefin anywhere in the Atlantic Ocean, appears extinct. Formerly thriving fisheries in the North Sea are gone. In some recent years, U.S. boats have landed only about 15 percent as many fish as two decades ago. The European population is now in a plummeting tailspin.

Driving all this, remember, is prices paid in Japan. An international trade ban would quell the intensity of the fishing. But a lot of money is at stake.

The proposal for a ban has gained surprising momentum headed into this month’s CITES meeting.

Fish from both the American- and Mediterranean-spawned populations breed separately, but mix in open-ocean feeding areas. Part of the sharp decline U.S. boats are feeling is from American overfishing of the past, and the most recent drop is largely from rampant European overfishing in the last decade. Since I drafted the initial proposal (which Sweden formally took to CITES in 1992), things have only gotten worse.

So last year, the principality of Monaco proposed a trade ban under CITES. A lot of fishing-industry lobbying pressure — in the U.S., in Europe, and in Japan — moved immediately against the proposal. They were looking for a repeat of what happened in 1992, when they succeeded in blocking an open vote in exchange for a few orchestrated, soon-forgotten promises from the fishing sector.

This time, things are different. The plight of fisheries is much more widely known, the scale of the fishing enterprise more ghastly, the fish more depleted, the effects on small-scale fishing interests (which might otherwise be catching bluefin tuna in a sustainable fishery) more acute. And with a world economy brought to the brink of collapse by greedy excess, the image of Japanese bankers gnawing bits of flesh from a fish costing $175,000 is no longer a vicarious curiosity, but rather distinctly less palatable. 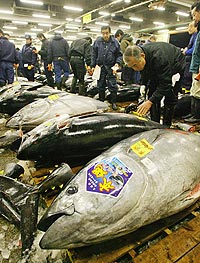 Photo by STR/AFP/Getty Images
Fishmongers check the quality of meat on large tuna at Tokyo’s Tsukiji fish market in 2007.

And so, this time, the proposal is gathering surprising momentum. Much of the decision-making is happening well before the actual CITES meeting convenes March 13 to 25 in Doha, Qatar, as various bodies weigh in and countries announce their support or opposition. It’s enormously significant that the U.N. has determined that the giant tuna meets the criteria for an international trade ban, and even the international tuna commission that — ineffectively — manages bluefin tuna fishing agrees that it does. The European Commission, which determines the European Union’s fisheries policy, has recommended that the EU’s 27 member nations (which vote as a bloc at CITES) support the ban. But the EU, still debating, has taken no official stance. Its position will now be pivotal.

Even if international trade is banned, bluefin tuna could still be caught and sold within any given country. But the fish are now sufficiently scarce that without Japan’s prices, many boats would turn unprofitable and give up. The fish could recover, and a more sustainable fishery develop.

With some of Europe’s major countries and the European Commission now calling for a trade ban — and with support by the U.S. — it is disappointing that the European Union remains uncommitted. In fact, every country with a stake in the future of the sea — should vote to ban international trade in bluefin tuna. The world needs to let this thousand-pound powerhouse of a fish recover from Japan’s insane lust for its flesh and the ensuing seagoing buffalo hunt.