At a factory in Wuxi, China, workers lift solar panels onto conveyor belts, while others in white lab coats move between machines as they check on a process for etching and engraving silicon wafers to form solar cells.

This scene in itself isn’t remarkable. But there is a new sort of excitement about the work. China’s production of solar panels has grown quickly in the past two years; it is it now the world’s leading exporter. When Matt Lewis, a representative of the California-based nonprofit ClimateWorks, visited the factory in October, he said it reminded him of his native Silicon Valley: The workers, even ordinary line workers, had a sense that they were part of building the future, the hot new industry.

This comparison makes some in the United States, and especially in Washington, nervous. Thomas Friedman has used the bully pulpit of his 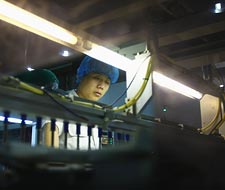 influential New York Times column to warn that the United States is engaged in a global green-tech competition with China, whose potential dominance represents a “new Sputnik.” (“How do you say ‘clean your clock’ in Chinese?” he wrote.) This notion, conjuring residual memories of the days in which U.S. rivalry with Soviet Union was crystallized in the space race — when the word “Sputnik,” the name of the Soviet space program, inspired quivers of anxiety about America’s political and economic prowess and its existential place in the world — has today struck a resonant chord in Washington, drawing upon existing fears and mistrust of China.

While some U.S. politicians and commentators still paint China as the global pollution villain, especially after the disappointing outcome at Copenhagen, others are beginning to take green China seriously — as a threat. Last fall, for instance, when Senator Charles Schumer got wind of a planned wind farm in west Texas, announced by a partnership of American and Chinese companies, that would use some wind equipment made in China and potentially create new jobs across the Pacific, he recommended blocking stimulus money from the project, rather than help boost green China. The stimulus money “is supposed to create jobs in America,” he wrote in a letter to Energy Secretary Steven Chu. (The new wind farm would also have created 300 jobs in Texas, but Schumer was worried that a greater number could be created in China.)

Last month, a front-page Sunday piece by Keith Bradsher of the New York Times took the competition metaphor a step further and declared that China was in fact already winning the green-tech race. The article, “China Leading Race to Make Clean Energy,” made the rounds in Washington with its assertion that China had passed the U.S. and several western European countries to become the word’s top manufacturer of both solar panels and wind turbines; it quoted the CEO of a private equity firm in Beijing saying, ominously, “Most of the energy equipment [of the future] will carry a brass plate, ‘Made in China.’”

China will gain thousands of jobs, but not necessarily at America’s expense.

The Times article also raised another spine-tingling geopolitical comparison — this time not likening Beijing to the latter-day USSR, but to the modern-day Middle East. “[China’s] efforts to dominate renewable energy technologies,” Bradsher wrote, “raise the prospect that the West may someday trade its dependence on oil from the Mideast for a reliance on solar panels, wind turbines and other gear manufactured in China.” In other words, China might become the Saudi Arabia of alternative energy; the implication seems to be that not only might green China pose an economic threat, but the sheiks of Beijing might soon wield undue political influence over a “dependent” United States.

Few business stories have ever been imbued with so much gravitas, so many fears, so many metaphors, so much geopolitical speculation, as the recent articles and coverage of China’s growing green-tech manufacturing sector.

Behind these fears, there is something worth probing — and some myths worth dispelling. Just what are Americans afraid of? To distill the cloud of anxiety, there seem to be three chief fears. The first is very tangible — jobs. The second is about America’s place in the world — will the U.S. remain a global leader in innovation? And the third is about leverage — will the U.S. control its future, or be beholden to a foreign energy gatekeeper, one that exerts undue pull on its economic or foreign policy?

“Even when you are looking at these big numbers that are coming out of China today, I think it really pays to give a close look at what is actually happening on the ground,” says Elizabeth Economy, director of Asia Studies at the Council on Foreign Relations and author of The River Runs Black. “Then you begin to get a different, more nuanced picture than what is blasted on the business section of the New York Times.”

The first essential fact to be aware of is that most news stories about China’s greentech gains are about manufacturing. China is becoming the wind-turbine factory to the world for much the same reasons it has long been the TV and t-shirt factory to the world: lower wages, lower land prices, fewer regulatory and other requirements, etc. This isn’t particularly surprising, and it shouldn’t be seen as a reversal of the status quo. What’s changed most dramatically in the last five years has been growing global demand. With significant government investment, Chinese factories have planned for and stepped up production accordingly.

Yes, this is bad news for U.S. cities like Detroit, where planners have recently been retrofitting old hot-rod factories into wind-turbine factories, such as an old Ford Thunderbird plant in Michigan that’s being converted into a green-tech manufacturing center in a bid to boost the local economy.

Manufacturing in China, especially low and medium-tech manufacturing, has certain clear economic advantages. But it’s also worth considering a few other facts. Most of the green manufacturing jobs that the U.S. stands to “lose” haven’t in fact been created yet; China will gain thousands of new jobs, but not necessarily at America’s expense. Moreover, the United States will still gain many new green-collar jobs, in installation and maintenance, which can only be locally based, as well as sales teams, conference planners, and other positions already arising to support the growing green-tech field.

Besides green-tech hardware, there’s also the question of the technology that enables it. Who will be responsible for the innovation that drives the low-carbon future? At present, America still has significant advantages — including the world’s leading university system and the entrepreneurial culture and venture-capital spigots of technology hubs, particularly Silicon Valley. “Intellectual property rights have done a lot to hamper China’s development of green technology,” says Linden Ellis, U.S. director of nonprofit China Dialogue. “People would rather come to Silicon Valley and develop a technology where they know it will be protected by the law, right down to every line, than go to China and try to develop a technology there where maybe the components will be cheaper and there is a lot of interest, but people do not trust that their findings will be protected.”

Similar concerns have, for the past two decades, grounded Beijing’s attempts to build a domestic airline industry, considered the pinnacle of high-tech manufacturing. Foreign companies and top-notch engineers have simply been unwilling to share technology with China (Boeing has even avoided building factories in China, for fear of commercial espionage). The result: Planes that fly from Beijing to Shanghai today are still built by Boeing and Airbus.

Of course, most green-energy equipment won’t match the complexity of assembling something like Boeing’s new Dreamliner, but the airplane situation sheds light on two points: that cheap labor is hardly the only factor driving business decisions, and that, despite substantial government support, China’s domestic aerospace engineers have not yet produced research to rival that of Western competitors. (China’s university system and research labs are famously politically constrained, limiting their ability to attract top global talent.)

‘The clean-tech war is overblown from the start,’ says one American entrepreneur.

Of course, China would like to change this. Beijing is doing its best to both allay the fears of international partners and to nurture its own homegrown innovators. A program known as the “State High-Tech Development Plan,” launched by Beijing in March 1986 and nicknamed the “863 Program,” aims to develop top scientists in China and to incubate cutting-edge technology projects in energy and other sectors. So far, its results have been modest over two decades: birthing a family of computer processors known as Loongson, and some technology used in the Shenzhou spacecraft. While the 863 Program’s track record should certainly dispel Western assumptions that no good research can come from China, it also disproves the notion that money alone can clone a Steve Jobs or Bill Gates or Sergey Brin.

This should allay some anxiety in Washington about America having fallen behind, but it is not a reason to become complacent. America has neither relinquished, nor is forever assured, her innovation crown.

Meanwhile, folks in the green-tech and environmental frontlines — as opposed to politicians and commentators — don’t see a “race” at all. “I do not see such a pattern exists,” says Wen Bo, a Beijing environmentalist. “The clean-tech war is overblown from the start,” says Richard Brubaker, an American environmental entrepreneur in Shanghai. To them, the green-tech “race” is not one that one side wins and the other loses, but a scenario where partnerships are sought out and the final equation doesn’t have to be a zero-sum game.

“For now at least, there is a great symbiotic relationship with California and the east coast of China on green technology,” says Linden Ellis. “Where California has the know-how, the technology, the universities and programs dedicated to developing technology, people who are interested in piloting it on a very expansive scale, or trying new combinations, often seek out research partners in China.” Similar partnerships can exist even when the focus shifts from research to commercial activity. Kevin Czinger, the CEO of a Santa Monica-based electric car company that partners with a Chinese battery company, noted in a New Yorker article that if the U.S. would stop feeling threatened by China’s progress on clean technology, it might begin to recognize its own strengths in this field.

It is telling what is left out of the increasingly dominant “U.S. versus China” green-tech “race” narrative. For starters, there are a lot of other countries at work developing green-tech and becoming significant green-tech markets — the low-carbon future, after all, isn’t solely a G-2 aspiration. Yet because the politics are different (there’s not the anxiety of the reigning superpower nervously eyeing the new kid on the block), the green aspirations of any country not named China are viewed through an entirely different prism by U.S. commentators. Germany, for instance, is home to the world’s top two solar manufacturing companies. Yet we don’t read headlines about Old Europe “cleaning our clock” to the 21st century.

“You haven’t seen this green-tech race raised over last 10 years while the Europeans have been innovating in this space more than the U.S.,” says Charles McElwee, an international environmental lawyer for Squires, Samson, and Dempsey based in Shanghai, “although that would have made more sense [than a U.S. versus China frame].”

Even as China’s solar panel exports grow, it continues to purchase clean locomotives from an American company, GE. Germany has developed world-class “green” metro cars, with China being a top customer. And French companies are among the world’s top innovators in water solutions. In other words, green-tech encompasses a lot more than windmills and solar panels — and progress in developing it can be a two-way street.