Scientist John England was flying in the High Arctic last summer when he spotted something large moving on a tiny island in the Beaufort Sea, not far from the Alaska-Yukon border. When he and the helicopter pilot moved in to get a closer look, they were astounded to see a grizzly bear prowling the shoreline.

What this brown bear was doing in the kingdom of its white cousin is not entirely clear. But a week later when I joined England in the field, we found the tracks of the animal leading to a partially excavated den. It was obvious that the bear had no intention of going back to the mainland.

The new concern is that interbreeding might result in hybrid creatures that will water down a unique gene pool.

Up until about twenty years ago, sightings of grizzlies in the High Arctic were extremely rare; a quirk of nature, many biologists thought, that may have simply occurred because the bear ended up walking the wrong way or because it had strayed too far following mainland caribou that sometimes cross the sea ice to the Arctic islands. But that thinking began to change in recent years as more brown bears and a succession of other animals such as red fox, white-tailed deer, Pacific salmon, and killer whales began showing up in areas traditionally occupied by polar bears, Arctic fox, caribou, Arctic char, and beluga whales.

Most scientists now believe that climate change, which is warming the Arctic faster than any other place on Earth, is responsible for removing the barriers — long winters, bitterly cold temperatures, and thick, continent-size sheets of sea ice — that once stopped these southern animals from moving into the far north.

Initially, the fear was that some of these Arctic animals would not be able to compete with their southern cousins. Experimental studies have shown that Arctic fox do not fare well in competition with red fox, and anecdotal evidence from some Arctic regions — including a video from Alaska’s Prudhoe Bay Oilfield showing a red fox killing an Arctic fox — suggests that this is the case in the wild. Killer whales moving into the Arctic from more southerly waters have eaten beluga whales and narwhal, as Inuit hunters have been reporting for years. In August 2005, several biologists from Canada’s Department of Fisheries and Oceans witnessed such an attack at Kakiak Point in Admiralty Inlet, Nunavut, Canada. 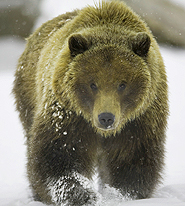 iStockphoto
Sightings of grizzlies in the High Arctic were extremely rare until two decades ago.

Now, the new concern is that interbreeding might result in hybrid creatures that will water down a unique gene pool that has helped Arctic animals adapt to this harsh environment.

Interbreeding is “likely to become increasingly important as the summer ice diminishes and is ultimately lost,” says David Tallmon, a marine biologist at the University of Alaska. “Hybridization is essentially impossible to reverse once it has begun on a large scale.”

The possibility of this happening came to light for biologist Brendan Kelly in 2006 when an American hunter killed an animal in the High Arctic that turned out to be the offspring of a female polar bear and a male grizzly. The bear had a combination of traits from both species, including a mix of white fur on its torso and brown fur on its paws. It also had a head shaped more like that of a grizzly, but the longer claws of a polar bear.

Kelly, who is now the deputy director of the Arctic Sciences Division at the National Science Foundation, wondered then whether this kind of hybridization was occurring in other species. Marine mammals such as seals, walrus and sea lions, he knew, are more prone to hybridization, because they share the same number of chromosomes, which allows them to produce offspring. If you removed this vast ice sheet that prevented southern marine mammals from moving north, he thought, what might be the outcome?

Marine mammals are more prone to hybridization because they share the same number of chromosomes.

In a recent paper published in the journal Nature, Kelly and two colleagues reported that hybridization had already occurred between harp and hooded seals, narwhal and beluga whales, and very likely between North Pacific right whales and bowhead whales. This is not unimportant because with only a few hundred North Pacific right whales left in the world, for example, the species’ gene pool is becoming perilously shallow. Kelly and his colleagues suggested that at least 22 Arctic marine mammals — many of them already threatened or endangered — are at risk from hybridization.

“There is something to be said about species adapting to climate change,” Kelly says. “But the kind of adaptation that’s necessary is a shift to genes that fit the new climatic environment better than the old genes. That takes time. The change that is taking place in the Arctic now is happening so fast that long-lived animals like whales, seals and polar bears aren’t getting the chance to adapt as quickly as it is necessary.”

Kelly likens the role that sea ice has played in the Arctic to the role South America has played in separating the world’s two great oceans. For tens of millions of years, the continent was a barrier to dispersal and gene flow between the South Atlantic and the South Pacific. If you could somehow remove South America, its disappearance would be similar to eliminating the big barrier of sea ice in the Arctic world.

“People have a tough time wrapping their minds around this concept,” says Kelly, “but sea ice is a huge barrier that prevents air-breathing marine mammals from moving from one place to the other. It is also in its own way a very important habitat for many Arctic species. Removing that as quickly as is happening now is going to have an impact.”

Almost lost in the current debate about Arctic hybridization and invasive species from the south is that some southern marine mammals will also bring with them diseases for which Arctic marine mammals have no immunity.

The possibility of this happening came to light several years ago when Canadian scientists were monitoring the spread of trichinella in the Arctic.

This parastic roundworm, which is commonly found in polar bears and Arctic fox, was of little concern in the Arctic until the 1980s, when it began to spread to walrus and to humans who had eaten uncooked walrus meat, as occurred last fall in a village in Nunavut. Trichinosis in humans can create severe gastrointestinal problems and in some cases can be fatal.

Ole Nielsen, a microbiologist working for the Canadian Department of Fisheries and Oceans, was assigned the task of tracking the spread of this parasite and determining whether there might be anything else of concern in the hunter-killed samples he was given. He soon found evidence of brucellosis, a bacterial disease — sometimes found in cattle, wild animals, dogs, and humans — that has been linked to reproductive failure in dolphins and baleen whales.

The disease is extremely widespread in the marine world, and Nielsen said it wasn’t a stretch to think it might have gotten a foothold in the Arctic. What did surprise him was the speed with which the disease has spread since he began sampling in the Arctic more than two decades ago. He now sees it in 21 percent of his samples, a four-fold increase from the 1980s. 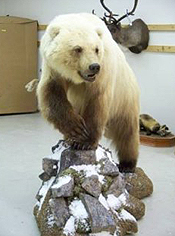 A bigger concern, however, was the discovery that neither beluga whales nor narwhal have antibodies that would help them resist phocine distemper, a deadly virus that was first discovered in the marine environment in 1988 when it killed 20,000 harbor seals in northwestern Europe. Since then it has spread to seals in Russia’s Lake Baikal, striped dolphins in the Mediterranean, and to several other marine mammals species worldwide.

No one knows how phocine distemper made its way into the ocean. But because it is so closely related to canine distemper, it is thought to have its origins in land-based species whose remains were dumped into salt water. “There are a lot of unknowns should distemper strains capable of infecting narwhal and beluga make their way to the North American Arctic,” says Nielsen. “If distemper gets a foothold here, it could get ugly. With as many as 80,000 narwhal and 150,000 belugas in the North American Arctic for most if not all of the year, a massive die-off somewhere is not out of the question.”

All that’s required is a carrier: a pilot whale, harbor seal, or dolphin — marine mammals that are known to carry the virus for long periods of time before suffering the symptoms. Any number of them could ride a warm current into an Arctic environment that is no longer choked with ice.

Brendan Kelly acknowledges that there is no easy solution to what’s happening. Culling hybrids, as some countries do, for example, would be difficult in an environment as large and as hostile as the Arctic. One step advocated by Kelly is more careful study of mammals killed by Arctic hunters, so that the spread of various lethal viruses can be tracked and better understood.

“Many of the species that are vulnerable are already endangered or threatened,” he says. “Removing that barrier of ice as fast as is happening now could be the final straw for many of them.”

Heading back home last summer, England and I crossed paths on separate occasions with an Inuit hunter and mining geologists who had spotted a total of three other grizzly bears. The Inuk turned out to be Roger Kuptana, the guide who led the American hunter to the hybrid “grolar” bear in 2006. He was also the cousin of the man who shot a second hybrid bear in the Arctic that spring.

“I’m sure there are more out there,” Kuptana told me. “Think about it. Bears almost always produce more than one cub. So it’s very likely that there are brothers or sisters of those two animals still out there mating with other bears, including that grizzly bear you saw.”