Does your cell phone increase your risk of brain cancer? Does it affect your skin or your sperm viability? Is it safe for pregnant women or children? Should you keep it in your bag, on your belt, in your pants or shirt pocket? Should you use a hands-free headset? Are present cell phone safety standards strict enough?

You don’t know? You’re not alone.

With some 4 to 5 billion cell phones now in use worldwide and hundreds of studies seeking evidence of their health effects published in peer-reviewed journals over the last 10 years, there’s precious little scientific certainty over whether cell phones pose any danger to those using them. For nearly every study that reports an effect, another, just as carefully conducted, finds none. All of which leaves journalists, consumer advocates, regulatory agencies, politicians, industry spokespersons, and cell phone users able to choose and interpret the results they prefer, or ignore the ones they don’t. 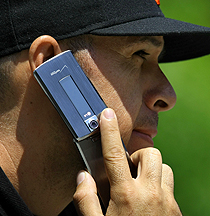 Getty Images
There are some 4 to 5 billion cell phones now in use worldwide.

Do you, for instance, cite the studies that report adverse effects on sperm viability and motility, due to exposure to cell phone radiation or the studies that showed no — or mixed — results?

Do you cite the 2001 study that found increased incidence of uveal melanoma (a cancer of the eye) among frequent cell phone users, or the 2009 study by the same authors that, in reassessing their data, found no increase?

Do you parse the data and report only those results that have found effects — no matter how small — without citing studies that found no effects? In its much-cited review of cell phone studies, the Environmental Working Group has done just that, reporting, for instance, that “a study from the University of California, Los Angeles, found a correlation between prenatal exposure to cell phone radiation and behavioral problems in children.” But the group left out the study’s very next sentence acknowledging that the association may be “noncausal and may be due to unmeasured confounding.”

The effects of cell phones have proven difficult to assess because they are relatively new, the way and the amount they’re used continues to evolve, and the problems that cell phones might cause are hard to detect. Brain cancers, for instance, are very rare cancers. They affect only some 18 out of every 100,000 people. But the fact that there’s been no recent increase in the numbers may be meaningless with regard to cell phone use since brain cancers are very slow-growing.

The question is whether safety standards are sufficient to protect against long-term exposure.

Cell phones produce “non-ionizing” radiation, which, unlike X- or gamma rays, doesn’t damage DNA by stripping away electrons from molecules in cell tissue. Radiofrequency energy does, however, produce heat and, at high enough levels, can damage cell tissue. This, in the late 1990s, prompted the U.S. Federal Communications Commission (FCC) and the International Commission on Non-Ionizing Radiation Protection (ICNIRP) in Europe to set limits on cell phones’ Specific Absorption Rate (SAR) — the measure of the amount of radiofrequency energy a cell phone user absorbs — at, respectively, 1.6 and 2.0 watts per kilogram. The question remains, however, whether these standards are sufficient to protect against long-term exposures and whether the buildup of heat in cell tissues is more damaging where there’s less blood flow to dissipate it, such as the outer ear, brain, skin, or testes.

The exposure standard has been the subject of Congressional hearings. Consumer groups have warned that children may be more susceptible to radiofrequency heating effects than adults. U.S. Congressman Dennis Kucinich introduced a bill for a federal research program on the effects of cell phone radiation that also calls for a label warning users about potential links between long-term use and cancer.

Last month, San Francisco passed a “Cell Phone Right-to-Know” law that requires manufacturers to post in stores each cell phone’s Specific Absorption Rate. In response, CTIA-The Wireless Association, which represents the wireless communications industry, filed suit July 23 in U.S. District Court in San Francisco to block enforcement of the new law. It cites the U.S. Food and Drug Administration’s (FDA) statement that “the weight of scientific evidence has not linked cell phones with any health problems.”

So far, the National Cancer Institute stands by the FDA. And neither the FCC nor the ICNIRP has recommended any changes in their present standards until there’s clear scientific evidence to demonstrate they need changing.

That kind of clarity may be a long way off.

Take, for example, the findings released in May of INTERPHONE, the largest and longest study ever conducted on whether — and by how much — cell phone use increases the odds of developing brain cancer. Carried out by the International Agency for Research on Cancer — at a cost of some $25 million and nearly 10 years in the making — the study involved roughly two dozen scientists and research teams from around the world and some 10,000 patients and cell phone users from 13 countries. The study’s epic scope, however, only made its meager conclusions seem all the more unsatisfying.

“Overall, no increase in risk of glioma [a cancer of the cells that protects the brain’s neurons] or meningioma [tumors that develop in the tissue that surrounds the brain] was observed with use of mobile phones,” the study concluded. “The possible effects of long-term heavy use of mobile phones require further investigation.”

‘After 10 years of research, we do not have an answer whether mobile phone radiation causes brain cancer,’ says one expert.

And yet even these modest claims proved contentious. The study scientists themselves recognized problems in the methodology: While they had good data on the participants’ tumor and cancer histories, they had very suspect data on their cell phone usage. Participants’ recall of how often and how much they talked on their cell phones, when checked against their actual cell phone records, in some cases proved very unreliable. The matching of patients with control subjects also turned out to be problematic. Should controls include only those who never used a cell phone and exclude those who’d used one only infrequently? While the distinction may seem insignificant, such selection biases can wreak statistical havoc. The analysis using the first group, for instance, resulted in the somewhat astonishing finding that regular users of cell phones had a reduced risk of developing glioma.

No one was surprised, therefore, that divisions appeared over interpreting the study’s results. These delayed its release for four years. The raw data, in fact, showed that “long-term heavy use” — that is, talking on a cell phone for 30 minutes a day for 10 years — increased the odds of developing glioma by 40 percent. The question was whether this result was subject to the same selection bias as that which strangely showed a reduced risk among regular users. The final decision was that the findings with regard to the “effects of long-term heavy use” were, while worth “further investigation,” too unreliable to conclude they represented a clear and irrefutable increased risk.

While the risk of any individual developing glioma would still be small, a 40 percent increase could still mean some thousands more new cases in the U.S. each year. And gliomas account for nearly half of all childhood tumors.

The question for the INTERPHONE scientists was whether this finding was real or the result of flawed data?

As Finnish researcher Dariusz Leszczynski of Helsinki’s STUK-Radiation and Nuclear Safety Authority, put it, the study’s combination of reliable and flawed information resulted in a “scientifically unreliable and non-informative result.”

“What it all means,” Leszczynski concludes, “is that after 10 years of research and millions of Euros used for it we are still in the starting point [his emphasis] and do not have the answer whether, or whether not, mobile phone radiation could cause brain cancer.”

Christopher Wild, director of the International Agency for Research on Cancer, acknowledges that most of the study’s participants, even the heaviest users, were not frequent mobile phone users by today’s standards. The criteria for a “regular” user was someone who made from one call a week to 25 calls a day, but no one in the study talked for more than half an hour a day. On the other hand, the study doesn’t take into account that people now often text rather than talk, and many more use hands-free headsets.

Ten years of use may not be a legitimate time frame to establish any causal links to such slow-growing cancers. And if there is a risk, does it continue to increase beyond 10 years of usage, and by how much? This would especially be a concern for those who began using cell phones when they were children, as is now frequently the case.

Nearly everyone seems to agree that it’s worth reducing your exposure as best you can.

New epidemiological studies now underway might prove more elucidating. They include COSMOS, a United Kingdom study that will follow for 20 to 30 years some 350,000 cell phone users from the UK, Finland, Sweden, Denmark, and The Netherlands, and that will use actual cell phone records for their database. Another study, MOBI-KIDS, is a European Union project in 13 countries that over five years will compare the cell phone usage of some 2000 young people, ages 10 to 24, with brain tumors to the same number of healthy controls.

Are there alternatives to epidemiological studies?

Studying animals exposed to cell phone radiation has proven difficult, especially when it comes to controlling doses of radiation which, in the case of cell phones, are small; the response of animal cells at low doses may not reflect the response of human cells.

Recent in vitro studies — that is, studies on cultured cell tissue — have focused on whether radiofrequency radiation might interfere with the DNA repair process and cause damaged DNA to accumulate. So far, some studies have found damage while others have not. With so much uncertainty as to what exactly causes the disruption of cell processes, it’s difficult to compare one study with another. The same uncertainty has been true regarding the few studies on sperm — of concern because many men tend to keep their cell phones in their front pants pockets.

Leszczynski and others point out that present SAR standards don’t necessarily take into account how cell phones are actually used. While our brain may be exposed to the allowable amount of radiofrequency radiation, our bodies and our skin may be getting more than the phone’s advertised dose of radiofrequency radiation. A hands-free device can reduce exposure to the head, but if you still keep your phone in your shirt pocket, your body’s still being exposed.

In the meantime, nearly everyone seems to agree that it’s worth putting the precautionary principle into play; that is, reduce your exposure as best you can. The radiofrequency radiation falls off quickly the farther your cell phone is from your body. Look for a cell phone with a low SAR. Don’t keep your cell phone in your pocket. Use a hands-free device. Text rather than talk. And while the cancer risks are unknown, the risks from using your cell phone while driving are pretty clear.