The slogan on Wisconsin’s license plate — “America’s Dairyland” — celebrates the state’s number one agricultural activity and iconic status as a milk and cheese producer. What it doesn’t reveal is how dramatically the dairy industry in Wisconsin and in other parts of the United States has been changing, or the environmental concerns those changes pose.

While milk carton imagery pictures bucolic, small farms, more than 50 percent of U.S. milk is now produced by just 3 percent of the country’s dairies — those with more than 1,000 cows, according to the U.S. Department of Agriculture (USDA). The very largest U.S. dairies now have 15,000 or more cows.

With this increased concentration of milking cows comes a corresponding concentration of manure production. And what happens to this manure is at the heart of the pollution issues surrounding the dairy industry. 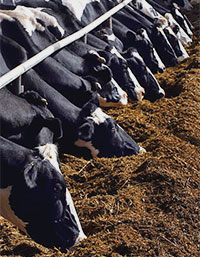 More than half of U.S. milk is produced by 3 percent of dairies. DAVID SILVERMAN/GETTY IMAGES

In Wisconsin, several dairy operations are now facing opposition to plans to expand their herds. Porous karst soils in the parts of Wisconsin where a significant portion of dairy expansion is occurring present some unique environmental issues. Run-off from dairy farms and other agricultural activities has seeped into aquifers and elevated levels of nitrogen, in some instances to unsafe concentrations; in one recent case, the Wisconsin Department of Justice levied a $65,000 fine against a dairy operation for contaminating groundwater.

Neighbors of Kinnard Farms dairy, located in the Kewaunee County town of Lincoln — an area of karst soils — are now in court challenging the state’s approval of a permit that would allow the dairy to expand its herd from 4,000 to more than 6,000 milking cows. About 50 percent of the town’s private wells currently have water that exceeds bacteria or nitrate safety standards. Residents opposing the DNR permit contend that it lacks sufficient information about how the dairy will manage the tens of millions of gallons of liquid manure its cows will produce.

The number of U.S. dairy operations with 2,000 or more cows has grown faster than those of any other size.

U.S. farm consolidation is nothing new, but recent changes in the dairy industry are transforming the business in ways that are increasingly worrisome to regulators, residents, and environmental groups. Wisconsin embodies this consolidation trend. State Department of Natural Resources (DNR) figures show the number of Wisconsin dairy farms with more than 500 cows grew by about 150 percent in the past decade. At the same time, the overall number of dairy farms dropped by about a third, just as they have nationwide. The number of U.S. dairy operations with 2,000 or more cows has grown faster than those of any other size as milk production has increased about 20 percent.

According to the EPA, a 2,000-cow dairy generates more than 240,000 pounds of manure daily or nearly 90 million pounds a year. The USDA estimates that the manure from 200 milking cows produces as much nitrogen as sewage from a community of 5,000 to 10,000 people.

This year and last, Wisconsin has fined several dairy operations for manure spills and manure runoff. According to an analysis by the Milwaukee Journal Sentinel, in 2013 a record number of manure spills — more than 1 million gallons worth — were recorded in Wisconsin. The newspaper reported that from 2007 to 2013, the state experienced an average of 15 manure spills annually from dairy farms. Roughly a third of those spills came from large Concentrated Animal Feeding Operations, or CAFOs.

Wisconsin is hardly alone in grappling with this problem. Similar pollution issues — primarily from spills related to manure storage — have been cropping up across the country. Some recent cases include:

In one of the larger cases of manure pollution in recent years, an estimated 15 million gallons of manure, water, and other matter spilled in 2010 into a slough that drains into the Snohomish River in Washington state, when a berm on a dairy farm’s manure lagoon failed.

Erin Fitzgerald, senior vice president for sustainability at the Innovation Center for US Dairy, a trade group, says a dairy’s size does not determine how well its environmental impacts are managed. William Matthews, Oregon Department of Agriculture CAFO program manager, concurs. “There are stellar operators of all sizes,” he says.

An industry spokesman says a dairy’s size does not determine how well its environmental impacts are managed.

Fitzgerald’s organization stresses the need for nutrient and water quality management plans tailored for each operation, and says dairy is “one of the most regulated and inspected industries in agriculture.” She also touts the industry’s voluntary commitment to “best practices” and improving its environmental footprint, including its 2008 commitment to reduce greenhouse gas emissions 25 percent.

Milking cows, explains the US Environmental Protection Agency (EPA), produce more manure than beef cattle and the Holsteins that dominate the U.S. dairy industry produce almost twice as much manure as Jerseys. Cows that give more milk per cow also produce more manure and per-cow milk production has almost doubled since the 1970s.

Historically, dairies dealt with manure by applying it to fields as fertilizer, as many do today. But as dairy herds have grown, a single farm often has more manure than it can use at any one time. Excess is typically stored in lagoons. “When it comes to the environmental impacts of concentrated dairy operations, it all comes down to manure management,” says Kendra Kimbirauskas, board director of Friends of Family Farmers.

Questions about manure management have prompted opposition to a number of Wisconsin dairy operations’ plans for large or expanded herds. One of these farms is Burr Oak Heifers, located in Wisconsin’s Central Sands region, an area known for its porous souls. Burr Oak Heifers is seeking a Wisconsin DNR permit to house 3,100 cows, which are expected to produce an estimated 3.32 million gallons of liquid manure and 45,900 tons of solid manure annually. In 2013, the farm, operating under a different business name, was fined $65,000 by the state for contaminating groundwater, including private well water. The permit now up for approval would grant the farm an exception to Wisconsin’s groundwater nitrate concentration limit of 10 parts per million (ppm) and permit its nitrate discharge at 28 ppm.

“We’ve kind of taken Mother Nature out of the picture,” says the manager of a large dairy farm.

Clean Wisconsin’s Wheeler calls the proposed nitrate discharge exemption “unprecedented.” The DNR explains that the exemption is based on background levels of nitrate present in groundwater coming onto the site from other sources, and that the permit will require groundwater monitoring and a “nutrient management plan” designed to control manure storage and how and when manure is spread on fields. The goal of such plans include preventing application of more nutrients than a farm’s soil can absorb and making sure it’s applied when it won’t easily run off, as in winter when the ground is frozen.

Wheeler notes that dairies have typically spread manure on their own fields to fertilize forage and other crops or contracted with other farms to do so. On small farms, the ratio of cows to pasture land generally allows for a sustainable nitrogen balance. But the majority of U.S. dairy herds are confined to barns throughout their entire lives and shuttle between stalls and milking parlors in enclosed corrals and corridors and eat silage and grain grown elsewhere. “We’ve kind of taken Mother Nature out of the picture,” says John Haarsma, manager of Rickreall Dairy, an Oregon operation with 3,500 cows.

In excess, manure’s nutrients — largely nitrogen and phosphorus — can create problems. Too much in surface water can create algae blooms that result in hypoxic or oxygen-deprived dead zones According to the EPA, excess nutrients from agriculture, including chemical fertilizers and dairy manure, are a major source of water pollution across the US.

In Wisconsin, explains DNR hydrogeologist Bill Phelps, about 10 percent of all private wells exceed the state’s nitrate water quality standard. In areas of high agricultural activity where fertilizer use is high, this percentage rises to about 30 percent, said Phelps.

Manure also contains pathogens that may include E.coli and other fecal coliforms. In addition, manure often contains pharmaceuticals — antibacterials and hormones — given to many dairy cows to fight disease and promote growth. Some of Kewaunee County’s wells have tested positively for estrogenic, endocrine disrupting compounds. The source has not been pinpointed, but numerous studies suggest that CAFOs, through their use of pesticides and hormones, are a source of some estrogenic compounds that enter U.S. drinking water.

In New York, now the country’s third-largest milk producing state, dairy expansion has also become an environmental issue. An ongoing lawsuit is challenging a 2013 regulation change that would increase the size of dairies allowed to operate without a nutrient management plan from 199 to 299 cows. Environmental advocates say the New York Department of Environmental Conservation failed to consider environmental impacts. “It was made for economic reasons,” to support the state’s booming Greek yogurt industry, says Rivekeeper staff attorney Michael Dulong.

In an interview with Yale Environment 360, Robert Martin, co-author of a recent study on industrial farm animal production, explains how a powerful and intransigent agriculture lobby has successfully fought off attempts to reduce the harmful environmental and health impacts of mass livestock production.READ MORE

Lack of measures to prevent catastrophic manure spills is among the reasons Environmental Advocates of New York policy director Katherine Nadeau gives for her organization’s opposition to this regulation change. She cites a 2005 incident in which 3 million gallons of manure spilled from a New York dairy into a nearby river, killing thousands of fish.

One day this winter, I visited one of the dwindling number of smaller U.S. dairies —Double J Jerseys, a 200-cow dairy operation in Oregon’s Willamette Valley. As I arrived cows munched clover in the barnyard, near the Bansens’ front door. Jon Bansen, a third-generation dairy farmer who produces milk for the Organic Valley co-op, said that the ratio of cows to pasture on smaller farms leads to a sustainable nitrogen balance. The steady rise of large-scale dairy operations, he said, has been “fueled by cheap fuel and cheap feed,” adding, “More is not always better.”