Following the nuclear disaster at Chernobyl 25 years ago, the Soviet government chose long-term evacuation over extensive decontamination; as a result, the plants and animals near Chernobyl inhabit an environment that is both largely devoid of humans and severely contaminated by radioactive fallout.

The meltdown last March of three nuclear reactors at the Fukushima Daiichi nuclear power plant in Japan also contaminated large areas of farmland and forests, albeit not as severely or extensively as at Chernobyl. But lacking land for resettlement and facing public outrage over the accident, the Japanese government has chosen a very different path, embarking on a decontamination effort of unprecedented scale.

Beginning this month, at least 1,000 square kilometers of land — much of it forest and farms — will be cleaned up as workers power-spray buildings, scrape soil off fields, and remove fallen leaves and undergrowth from woods near houses. The goal is to make all of Fukushima livable again. But as scientists, engineers, and ordinary residents begin this massive task, they face the possibility that their efforts will create new environmental problems in direct proportion to their success in remediating the radioactive contamination.

“Decontamination can be really effective, [but] what you have is a tradeoff between dose reduction and environmental impact,” says Kathryn Higley, a radioecologist at Oregon State University who has studied several

Officials estimate that Fukushima will have to dispose of 15 to 31 million cubic meters of contaminated soil and debris.

decontamination sites in the United States. That’s because the radioactive particles the Japanese are trying to get rid of can be quite “sticky.” Removing them without removing large amounts of soil, leaves, and living plants is nearly impossible. The Ministry of Environment estimates that Fukushima will have to dispose of 15 to 31 million cubic meters of contaminated soil and debris by the time the decontamination projects end. Costs are predicted to exceed a trillion yen.

Given these drawbacks, an International Atomic Energy Agency fact-finding mission advised the Japanese authorities to “avoid over-conservatism” in their decontamination plans — in other words, not to clean up more than necessary to protect human health. Yet the health impacts of long-term exposure to low levels of radiation are not entirely clear. Many scientists believe exposure to even very low levels can slightly increase cancer risk, and many Fukushima residents feel they should not be forced to live with that risk — or the undercurrent of fear it brings.

But while the political debate over how much to clean up rages on, more practical preparations are already underway. On a frigid afternoon last month, about 160 workers wearing papery white jumpsuits and hot pink respirators filed up a winding road into a farming hamlet in Kawamata Town, about an hour southeast of Fukushima and just inside the evacuation zone. Were it not for the bright blue plastic sheets, heavy-duty leaf vacuums, cranes, and trucks scattered everywhere, the village would have been picturesque. Now, the intricacy of the landscape — its tiny rice paddies, bamboo groves, woodlots, streams, and earth-walled barns — was adding to the challenges of decontamination.

The workers fanned out over the otherwise abandoned rolling hills and brown fields. One group climbed a hill to rake fallen leaves into large black bags, while another spread magnesium over fields to solidify the soil for

The effectiveness and efficiency of various decontamination technologies is being tested at 19 model sites.

later removal. Nearby, another of the indistinguishable white figures chopped down overgrown weeds.

The workers had been hired by Taisei Corporation, one of three large construction firms that won contracts from the Japan Atomic Energy Agency to test the effectiveness and efficiency of various decontamination technologies at 19 model sites throughout Fukushima Prefecture. The results of these experiments will guide the large-scale decontamination effort set to begin later this month.

Human exposure can be lowered without cleansing the entire landscape, of course. Japan’s bans on hunting bears and wild pigs, selling wild mushrooms, and growing rice in certain areas fall into this category; so does the recommendation from Fukushima’s agriculture department that farmers add potassium fertilizer to moderately contaminated fields in order to minimize cesium uptake by crops. As for forests, the focus for the time being is on decontaminating only patches close to homes because most people spend little time in remote woods.

But because the most heavily contaminated parts of Fukushima are, like the village in Kawamata, a hilly mosaic of houses, woods, and fields, the government can’t leave nature entirely untouched. Houses backed by wooded hills are very common, as are fields in small valleys; in both cases, runoff from uphill can recontaminate lowlands. Intense public concern over contaminated food, meanwhile, means many farmers want to clean up their land as quickly and thoroughly as possible. 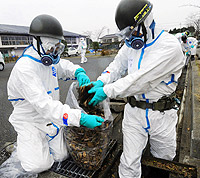 STR/AFP/Getty Images
Japanese soldiers collect contaminated leaves in Fukushima Prefecture.
Japan’s decontamination efforts are focused mostly on the radionuclides caesium-134 and caesium-137, which are currently present in approximately equal amounts and have half-lives of two and 30 years respectively. Although other radionuclides have been found in Japan, these two pose the greatest long-term threat to human health through ingestion and external exposure. Radiocaesium has been found in all of Japan’s prefectures but is most highly concentrated within an oblong swath that extends about 50 kilometers northwest of the plant, and to a lesser extent throughout eastern and central Fukushima Prefecture.

Radiological risk assessment expert John Till, president of the U.S.-based Risk Assessment Corporation, says the fallout will probably be gone from the surface of plants within a few years, but attach strongly, through ion exchange, to soil — in particular to the clay soils common throughout Fukushima. From there the radiocaesium will move slowly into plants, at a rate — and level of risk — that is still unclear.

Remediation methods that work, Higley says, “seem kind of absurd but actually make sense”: cutting, scraping, raking, and plowing, to varying degrees of depth and severity. Government agencies, private companies, and academics are all experimenting to find the most efficient and effective methods for Fukushima. The prefectural government has recommended removing leaf litter from woods within 20 meters of houses and deeply plowing or turning over fields to dilute contamination. In the heavily contaminated fields that cover at least 8,000 hectares around Fukushima, several centimeters of topsoil will likely be removed. Some farmers are power-washing their orchards or shaving bark off trees.

Officials involved with the cleanup are well aware of the drawbacks to these approaches: huge amounts of radioactive waste that no one wants to store long term; immense investments of money, labor, and time; damage to wildlife habitat and soil fertility; increased erosion on scraped-bare

‘You take away all the soil and the ecosystem is destroyed,’ says one scientist.

hillsides; and intrusion by people and machinery into every area scheduled for remediation.

“You remove leaf litter from the forest floor and radiation levels fall,” said Shinichi Nakayama, a nuclear engineer at the Japan Atomic Energy Agency who is overseeing the 19 decontamination pilot projects planned or underway. “You take away the deeper layers and they fall more. But you take it all away and the ecosystem is destroyed. Water retention goes down and flooding can occur.”

Although no significant conservation areas lie within the most contaminated parts of Fukushima, some species on the prefecture’s Red List of endangered or threatened species — including a grassland butterfly and the Japanese peregrine falcon, both listed as “vulnerable” — are found there and could be impacted if projects like these are implemented on a large scale.

But Kiyomi Yokota, a naturalist and secretary of the Fukushima Nature Conservation Association, said that standing up for wildlife in the current situation would be difficult. “If people want to go home, I don’t think I could tell them, ‘No, stop the decontamination, save the fish,’” he said. Human health, in other words, trumps habitat.

But just how much fallout does the government need to remove in order to protect human health? On that key question the science is frustratingly inconclusive.

Past studies have shown that cancer rates rise in populations exposed to a dose of 100 millisieverts (mSv) of radiation. They reveal much less about the situation in Fukushima, where lower doses will continue for many years. (Measurements taken in Fukushima City in late December, for instance, ranged from .33 to 1.04 microsieverts per hour; sustained for a year, that adds up to doses of 2.9 to 9.1 millisieverts.) The International Commission on Radiological Protection recommends that the general public be exposed to a yearly dose of no more than 1 to 20 mSv following a nuclear accident; those two numbers represent the difference between a decontamination effort confined to about 500 square kilometers and one encompassing much of Fukushima Prefecture and beyond.

So far, Japan’s central government has taken direct responsibility for decontaminating areas within 20 kilometers of the plant and those where yearly exposure could exceed 20 mSv. (Together these areas make up the evacuation zone.) The Environment Ministry predicts natural radioactive decay and weathering alone will reduce levels 40 percent within two years; Large-scale versions of the decontamination pilot projects will supposedly do the rest.

Radioactivity in the Ocean:
Diluted, But Far from Harmless

The release of contaminated water from the crippled Fukushima nuclear complex last year stoked concerns about how that radioactivity might affect marine life in the Pacific. While the ocean’s capacity to dilute radiation is huge, Elizabeth Grossman reported last year that nuclear isotopes were already moving up the local food chain.
READ MORE
Some residents and activist groups like Greenpeace have called for a faster and more aggressive decontamination effort, while others believe most of Fukushima is already safe enough to live in. Still others doubt decontamination will succeed and are pushing the government to spend money on relocation instead.

“Safe? What is safe?” Sumiko Toyoguchi, an elderly evacuee who used to live six kilometers from the nuclear plant and now lives in temporary housing in Fukushima City, asked last month. She said she doesn’t want to return to her former home even after decontamination takes place, in part because she worries the work won’t be done adequately.

Ten months after the nuclear disaster, trust in the authorities is nearly nonexistent. Without it, Japan’s government risks the biggest cleanup fiasco of all: a decontamination effort that carries huge financial and environmental costs but still fails to convince Fukushima residents that their homes, farms, and forests are safe once again.