Environmentalists attempting to preserve the vanishing Amazon rain forest now confront a stark paradox: Never before have they succeeded in protecting so much of the world’s largest tropical forest, yet never before has so much of it simultaneously been destroyed. The key question today is whether new models of conservation — including an increasingly popular, market-based program known as REDD — will be able to reverse the steady loss of tropical forests, not only in the Amazon, but also in Indonesia, Borneo, and Africa’s Congo basin, where virgin woodlands continue to be razed at an unprecedented rate.

Since 2000, foreign donors, working with the Brazilian government, have spent hundreds of millions of dollars to place 386,000 square miles of the Amazon — an area nearly as large as France and Spain combined — in protected areas. Yet during that same period, logging, farming, ranching, and development in the Amazon have destroyed a forest area half the size of Norway.

With land prices fast appreciating, cattle ranching and industrial soy farms expanding, and billions of dollars of new infrastructure projects in the works, development pressure on the Amazon will only accelerate. And the situation is worse in Indonesia’s tropical forests, now being felled for timber and the creation of oil palm plantations. Indeed, since 2001, deforestation in Brazil and Indonesia alone has led to the loss of 116,000 square miles of forest.

If these trends continue, one of the world’s greatest ecosystems — its tropical forests — will be whittled away piece by piece, with dire consequences not only for the diversity of life on earth but also for the world’s climate, already warming at an alarming rate.

Hope for avoiding the worst outcomes in the Amazon, Indonesia, and other tropical forest regions increasingly rests today on the belief that markets will soon pay for the services provided by healthy rain forests, which include biodiversity maintenance, rainfall generation, carbon sequestration, and moderation of the world’s climate. This idea is quickly gaining momentum as a wide range of interests — including global banks and financiers, development experts, government policymakers, and environmentalists — have embraced the concept that the best way to keep forests intact is to pay rain forest nations, and the people who inhabit the forests, not to chop them down.

The concept is known as REDD — “reducing emissions from deforestation and degradation” — and it is more than an abstract theory:

For the moment, these efforts are isolated and halting. To create a critical mass, the world community must mandate sharp reductions in greenhouse gas emissions and place a price on carbon. Meetings are taking place this week at a U.N. climate conference in Poznan, Poland, on these very topics, in advance of an effort next year to replace the 1997 Kyoto Protocols with new limits on greenhouse gases.

The goal is to get to the point where, thanks to caps on greenhouse gas emissions and a global carbon market, billions of dollars are raised each year to invest in REDD, or “avoided deforestation”, projects. While corporations pursuing commercial interests could end up protecting forests worldwide, poor countries could find a new way to capitalize on their natural assets without destroying them.

“Forests fall because they are worth more cut down than standing,” says Andrew Mitchell, director of the Global Canopy Program, a tropical forest research and conservation group. “This is a classic example of a market failure, but ecosystem services could change that.”

Despite its promise, REDD remains controversial and faces many challenges, including ensuring land rights and financial benefits for forest inhabitants; establishing baselines to accurately measure reductions in deforestation rates; causing “leakage,” when conservation measures in one area shift deforestation to another; and concerns that developed countries would merely invest in REDD projects as a way of continuing to emit large quantities of greenhouse gases. But with the weakness of traditional conservation measures becoming glaringly obvious as deforestation rates increase, and with growing awareness that destruction of tropical forests is a major source of greenhouse gas emissions, there is growing support for the idea that a market-based approach to preserving forests may be the best hope. 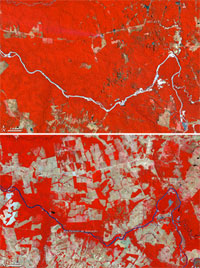 The conservation group WWF once opposed REDD programs out of concern that they were a mechanism to absolve rich countries of the need to reduce greenhouse gas emissions. But in September, in the face of ongoing forest loss, WWF president and CEO Carter Roberts said his group would now support REDD projects as a critical component of addressing climate change, as roughly 20 percent of the world’s greenhouse gas emissions come from deforestation. Noting that if the Amazon were a country, deforestation there would place it in the top seven emitters of greenhouse gases worldwide, Roberts said, “Unless the world has policies that recognize the value of standing trees and forests, we will have failed.”

The concept that developing countries should be compensated for reducing emissions from deforestation and forest degradation has been around for more than a decade, but it had failed to gain traction not only because of fears that wealthy nations could buy their way out of emissions cuts. Some feared — and still worry — that the rights and interests of indigenous people would be ignored as governments, carbon traders, and speculators secure rights to the ecosystem services provided by tropical forests without the consent of the people who lived there. In places where land rights are poorly defined, such claims could be used to evict people from lands upon which they have been living for generations.

“REDD (projects) … will only achieve lasting results if they are adapted to conditions on the ground and help meet the needs of local people,” the Forests Dialogue on Climate Change — a coalition of indigenous people, trade unions, governments, and others — said in a statement last month.

Emerging REDD efforts have been taking those interests into account. And many tropical forest experts say that avoided deforestation programs may offer a better alternative than the status quo, which has long led to the displacement of native peoples from their lands at the hands of loggers and developers.

Seeing the enormous potential, governments and investors are already positioning themselves for a forest carbon market.

Research suggests that once a viable international carbon market exists, pure economics alone may boost REDD. In areas where infrastructure is poor and forests are abundant, REDD may offer attractive economic returns for rural communities. Several studies in Indonesia and Brazil have shown that locals could earn far more if they received REDD funds to support sustainable development than they would from conventional logging or conversion of forests to farming. The world’s only sizable carbon market, in the European Union, prices carbon at $20 per ton. If investors seeking carbon offsets were to pay even a fraction of that amount to help preserve tropical forests in Indonesia, for example, it would dwarf the financial benefits the country receives from forestry — currently only $0.34 per ton of carbon released, one study has shown. Further, because REDD is compatible with sustainable harvesting of forest products and low-impact ecotourism, it could become an integral part of rural development schemes.

The Woods Hole Research Institute estimates that using REDD programs to reduce deforestation in the Brazilian Amazon to nearly zero within a decade would cost $100 million to $600 million per year. The Eliasch Review, a British government-commissioned report on REDD, estimates that a cap-and-trade system that includes forest carbon could generate more than $7 billion per year — ­primarily through purchase of carbon offsets — to finance forest conservation.

Seeing the enormous potential of REDD, governments and investors are already positioning themselves for a forest carbon market. Last December, Merrill Lynch became the first major U.S. bank to invest in an avoided deforestation project, putting $9 million towards rain forest conservation in Sumatra. The bank hopes to lock up forestry carbon credits while they are cheap and sell them at a higher price if carbon markets emerge. The deal — involving Australia-based Carbon Conservation, Merrill Lynch, Flora and Fauna International, and the provincial government of Aceh — could generate hundreds of millions in carbon financing over the next 30 years by preventing logging and conversion of forest to oil palm plantations.

Aceh Governor Irwandi Jusuf sees the initiative as a key step in the region’s recovery from the devastating 2004 tsunami and three decades of civil war. To support the project, Irwandi has imposed a moratorium on logging, hired more than 1,000 former fighters as rangers, and laid out plans for the development of environmentally sustainable businesses.

In March a private equity firm took the unprecedented step of purchasing the rights to environmental services generated by a 1,432-square-mile rain forest reserve in Guyana. London-based Canopy Capital is effectively banking that the services generated by a living rain forest will eventually see compensation in international markets. Eighty percent of the profit will go to local communities through micro-credit loans to sustainable economic activities.

“The only way we are going to turn this thing around is through a profit motive,” said Hylton Murray-Philipson, director of Canopy Capital. “This is what is needed to harness the power of markets. But it doesn’t stop with making a profit—we are also going to have to deliver a better living for local people. We need to start valuing the intrinsic parts of the forest as an intact entity rather than having to convert it for something else.”

Brazil favors a different approach, outlined at this month’s climate talks in Poznan, Poland. Brazil plans to establish a voluntary fund into which 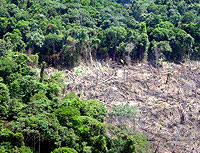 Deforestation in the rain forest of Peru. RHETT BUTLER/ MONGABAY.COM

developed countries, companies, and other entities pay to reduce emissions from deforestation. With complete control over how the funds are spent and no allocation of conventional carbon credits to contributors, the initiative maintains Brazil’s sovereignty over the Amazon and gives it an unprecedented financial incentive to preserve the region’s forest cover. The fund aims to raise $21 billion by 2021, and Norway has committed up to one billion to the scheme by 2015, contingent on Brazil’s success in reducing deforestation. What Brazil does is crucial, since it is home to more than 60 percent of the Amazon and accounts for nearly half of global tropical forest loss annually.

Brazil has been vague on how the funds will be used, but the Bolsa Floresta program in the state of Amazonas could serve as a model for compensating rural populations for avoiding deforestation. The program, launched last year, pays forest families living near the Uatuma Reserve about $25 per month in return for not clearing and burning primary forest lands. Residents are also provided with health care, clean water, and greater access to education.

Though experts disagree on methods, few dispute that the world must try a new approach to tropical forest conservation — and fast. Daniel Nepstad, a leading tropical forest ecologist who now heads up conservation at the Gordon and Betty Moore Foundation, suggests we are already approaching a critical tipping point in the Amazon where the world’s largest rain forest will no longer be able to supply the vital ecological services it currently provides.

“The Amazon rain forest has already entered a dieback, in which the vicious cycle between land use, seasonal drought, and fire are rapidly degrading enormous swathes of rain forest each year,” said Nepstad, noting that if present deforestation rates continue half of the Amazon will be burned, cut or degraded by 2030. He maintains that, in addition to greatly reducing future cutting, 100,000 square miles of degraded Amazon land must be regenerated. Those measures, says Nepstad, would help ensure that roughly three-quarters of the original Amazon rain forest remains intact, an important factor in stabilizing regional and global climate systems.

Brazil’s target — a 70 percent reduction in net deforestation over the 1996-2005 baseline by 2018 — is less ambitious but is an acknowledgement of both the importance of maintaining substantial forest cover in the Amazon and the potential of forest carbon as an economic asset. In the long run, improved governance, new market-based compensation systems that reward environmental performance, and continued expansion of protected areas are all key to saving forests like the Amazon.