We live in an era of unprecedented road and highway expansion — an era in which many of the world’s last tropical wildernesses, from the Amazon to Borneo to the Congo Basin, have been penetrated by roads. This surge in road building is being driven not only by national plans for infrastructure expansion, but by industrial timber, oil, gas, and mineral projects in the tropics.

Few areas are unaffected. Brazil is currently building 7,500 kilometers of new paved highways that crisscross the Amazon basin. Three major new highways are cutting across the towering Andes mountains, providing a direct link for timber and agricultural exports from the Amazon to resource-hungry Pacific Rim nations, such as China. And in the Congo basin, a recent satellite study found a burgeoning network of more than 50,000 kilometers of new logging roads. These are but a small sample of the vast number of new tropical roads, which inevitably open up previously intact tropical forests to a host of extractive and economic activities.

Despite their environmental costs, the economic incentives to drive roads into tropical wilderness are strong. Governments view roads as a cost-effective means to promote economic development and access natural

No other region can match the tropics for the sheer scale and pace of road expansion.

resources. Local communities in remote areas often demand new roads to improve access to markets and medical services. And geopolitically, new roads can be used to help secure resource-rich frontier regions. India, for instance, is currently constructing and upgrading roads to tighten its hold on Arunachal Pradesh state, over which it and China formerly fought a war.

Of course, roads are not just an environmental worry in the tropics. In forested areas of western North America, one of the best predictors of wildfire frequency is the density of roads. In Siberia, road expansion is promoting a sharp increase in logging and forest fires. And new roads in the Arctic could potentially alter epic mammal migrations.

But no other region can match the tropics for the sheer scale and pace of road expansion and the degree of environmental change roads bring. Road building has a range of direct impacts on rainforest ecology. In wet tropical environments, the cut-and-fill operations associated with road construction can impede streams, increase forest flooding, and drastically increase soil erosion. Roads also discharge chemical and nutrient pollutants into local waterways and provide avenues of invasion for many disturbance-loving exotic species.

Roads that cut through rainforests can also create barriers for sensitive wildlife, many of which are ecological specialists. Studies have shown that even narrow (30 meter-wide), unpaved roads drastically reduce or halt

local movements for scores of forest bird species. Many of these species prefer deep, dark forest interiors; they have large, light-sensitive eyes and avoid the vicinity of road verges, where conditions are much brighter, hotter, and drier. A variety of other tropical species — including certain insects, amphibians, reptiles, bats, and small and large mammals — have been shown to be similarly leery of roads and other clearings.

And by bringing naÃ¯ve rainforest wildlife into close proximity with fast-moving vehicles, roads can also promote heavy animal mortality. For some creatures, especially those with low reproductive rates, roads could potentially become death zones that help propel the species toward local extinction.

Although the direct effects of roads are serious, they pale in comparison to the indirect impacts. In tropical frontier regions, new roads often open up a Pandora’s box of unplanned environmental maladies, including illegal land colonization, fires, hunting, gold mining, and forest clearing. “The best thing you could do for the Amazon,” said the respected Brazilian scientist Eneas Salati, “is to bomb all the roads.”

In Brazilian Amazonia, my colleagues and I have done studies showing that around 95 percent of all deforestation occurs within 50 kilometers of highways or roads. Human-lit fires increase dramatically near Amazonian roads, even within many protected areas. In Suriname, most illegal gold mining occurs near roads, whereas in tropical Africa we have found hunting to be so intense near roads that it strongly affects the abundance and behavior of forest elephants, buffalo, duikers, primates, and other exploited species. Roads can sharply increase trade in bushmeat and wildlife products; one study found that eight killed mammals were transported per hour along a single road in Sulawesi, Indonesia. 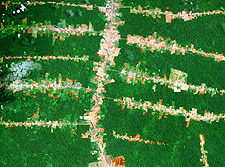 NASA
A satellite view of deforestation associated with roads in the Brazilian Amazon.
Paved highways are especially dangerous to forests. They provide year-round access to forest resources and reduce transportation costs, causing larger-scale impacts on forests and wildlife than do unpaved roads, which tend to become impassable in the wet season. The proposed routes of new highways often attract swarms of land speculators who rush in to buy up cheap forest land, which they then sell to the highest bidder.

Perhaps the most damaging aspect of paved highways is that they spawn networks of secondary roads, which spread further environmental destruction. For instance, the 2,000-kilometer-long Belem-BrasÃ­lia highway, completed in the early 1970s, has today evolved into a spider web of secondary roads and a 400-kilometer-wide swath of forest destruction across the eastern Brazilian Amazon. As my colleagues and I showed in a 2001 study published in Science, large expanses of the Amazonian forest could be fragmented by the advance of new highways and roads in Brazil. According to our models, by the year 2020, rates of forest destruction would rise by up to 500,000 hectares per year, and the area of forest that remained in large, unfragmented tracts — exceeding 100,000 square kilometers — would decline by 36 percent.


Can the environmental impacts of tropical roads be minimized? In theory, the answer is “Yes, partially.” Frequent culverts can reduce the effects on streams and hydrology. Impacts on animal movements can be reduced by keeping road clearings narrow enough so that canopy cover is maintained overhead, providing a way for arboreal species to cross. In high-priority areas, such as certain national parks, rope-bridges are being used to facilitate road crossings of monkeys and possums. For small ground-dwelling species, culverts beneath roads can allow road-crossing movements, and even large animals such as Asian elephants will use highway underpasses that are designed to be wildlife-friendly.

Measures also exist to limit the devastating indirect impacts of roads, such as illegal land colonization and forest clearing. One of the most vital steps is

A vital step is to legally establish parks or reserves along road routes in advance of construction.

to legally establish parks or reserves along road routes in advance of road construction. Such reserves often substantially reduce forest incursions, though they rarely halt them entirely. Another promising idea is to promote railroads rather than highways in tropical wilderness regions. Because railroads stop only at fixed locations, the spatial patterns of forest exploitation and movement of forest products can be more easily controlled and monitored than with roads.

In practice, however, limiting the environmental impacts of roads in developing nations is expensive and risky. Tropical nations rarely have the institutional capacity, human capital, or financial resources to adequately manage development in their remote frontier regions, frequently leading to a “resource grab” revolving around illegal trade and outright theft of natural resources, which is greatly facilitated by road expansion.


When it comes to tropical roads, I believe three conclusions are inescapable. First, highways and roads are the single biggest factor determining the pattern and pace of tropical forest destruction. New roads that slice deep into intact forest tracts are especially devastating.

Second, among the many human drivers of environmental change, road building is one of the most readily amenable to policy modification. In practical terms, it is far easier to cancel or relocate a road project than it is to, say, reduce human overpopulation or halt harmful climate change.

Finally, if we hope to maintain intact tropical forests and their vital ecosystem services and biodiversity, then we simply must get serious about tropical roads. And there is only one real solution: carefully plan and limit frontier road expansion.

How can this be achieved? First, we need to sensitize political decision-makers, economists, infrastructure planners, and the general public about

If we hope to maintain intact tropical forests, then we must get serious about tropical roads.

the myriad environmental costs of road expansion, especially into intact forests. The biggest road projects are often being supported by international lenders — such as the Asian, African, and Inter-American development banks — and by foreign aid doled out by China, the U.S., and the European Union. Educating such decision-makers needs to be done both generally and on a project-by-project basis.

When I was president of the Association for Tropical Biology and Conservation, one of my key goals was to use the organization’s scientific expertise and credibility to combat some of the most environmentally risky plans for frontier road expansion. We were especially active in critiquing plans to punch new roads into the cores of national parks, such as YasunÃ­ in Ecuador, Kerinci Seblat in Indonesia, and the Serengeti in Tanzania.

Another key priority should be better frontier law enforcement and forest monitoring, given that much road building in tropical nations is illegal or unplanned. Special attention should be focused on the more-aggressive timber, oil, gas, and mineral corporations, many of which are known to engage in bribery and collusion in their efforts to gain unbridled access to forest resources.

The World’s Tropical Forests
Are Already Feeling the Heat

Much attention has been paid to how global warming is affecting the world’s polar regions and glaciers. But William Laurance warns that rising temperatures could have an equally profound impact on rainforests and are already taking a toll on some tropical species.
READ MORE
There is also a dire need to improve environmental impact assessments (EIAs) for planned roads. In Brazil, for instance, EIAs for several major Amazonian highways focused only on a narrow strip along the road route itself, while completely ignoring the devastating indirect effects of roads. Similarly, EIAs for major development projects, such as large mines and hydroelectric dams, often ignore the impacts of road proliferation that such projects inevitably promote.

Finally, given that tropical deforestation is a massive source of greenhouse gas emissions, international carbon-trading funds should be used to better plan and mitigate road projects, to establish new protected areas in advance of road construction, and to halt the most ill-advised road projects altogether. In the end, the easiest and most cost-effective way to limit the manifold pressures from roads may be simply not to open Pandora’s box in the first place.