“Trees are stunning,” Miles Silman was saying. “They’re beautiful. It’s true they take a little more appreciation. You walk into a forest, and the first thing you notice is, ‘That’s a big tree,’ or ‘That’s a tall tree,’ but when you start to think about their life history, about everything that goes into getting a tree to that spot, it’s really neat. It’s kind of like wine; once you start to understand it, it becomes more intriguing.”

We were standing in eastern Peru, at the edge of the Andes, on top of a 12,000-foot mountain, where, in fact, there were no trees — just scrub and, somewhat incongruously, a dozen or so cows, eyeing us suspiciously. The sun was sinking, and with it the temperature, but the view, in the orange glow of evening, was extraordinary. To the east was the ribbon of the Alto Madre de Dios River, which flows into the Beni, which flows into the Madeira, which eventually meets the Amazon. Spread out before us was Manu National Park, one of the world’s great biodiversity “hot spots.”

“In your field of vision is one out of every nine bird species on the planet,” Silman said. “Just in our plots alone, we have over a thousand species of trees.”

Silman, who teaches at Wake Forest University, calls himself a forest ecologist, though he also answers to the title of tropical ecologist, community ecologist, or conservation biologist. He began his career thinking about how forest communities are put together, and whether they tend to remain stable over time. This led him to look at the ways the climate in the tropics had changed in the past, which led him, naturally enough, to look into how it is projected to change in the future. What he learned inspired him to establish the network of tree plots that snakes down the mountain we were standing on.

In the popular imagination, global warming threatens cold-adapted species, like polar bears and Emperor penguins. However, Silman and many other ecologists have come to believe that climate change is likely to have just as great an impact, indeed probably an even greater impact, in the tropics.

The reasons for this are several. Temperatures in the tropics are a lot less variable than at higher latitudes, so tropical species tend to have a narrow range of “thermal tolerance.” Also in the tropics, temperature belts tend to be wider; thus, to track the temperature changes projected for the next century, tropical species will have to move a lot farther (and therefore faster) than temperate species. Meanwhile, because the tropics are already the hottest places on earth, temperature increases there will create “novel climates” of a sort that probably haven’t been seen on earth in millions of years. Finally, and perhaps most significantly, the tropics are where most species actually live.

A researcher handed me a leaf the size of a dinner plate. ‘This is a new species,’ he said.

The next morning, we got up early to watch the sun rise over the ridge. Then we packed up our gear and headed down to the first plot. “Pick out a leaf with an interesting shape,” Silman instructed me once we’d descended into the cloud forest. “You’ll see it for a few hundred meters and then it will be gone. That’s it. That’s the tree’s entire range.”

Silman was carrying a machete, which he used to hack away at the undergrowth. Occasionally he waved it in the air to point out something interesting — a spray of tiny white orchids; a parasitic plant with a bright orange flower; a bright red fuchsia that’s pollinated by a hummingbird whose bill is longer than its body. Several of Silman’s graduate students were also along on the trip. One of them, William Farfan Rios, handed me a leaf the size of a dinner plate. “This is a new species,” he said. Along the transect, the students have found 30 new species of tree, and one entirely new genus. (The new genus has yet to be named.) 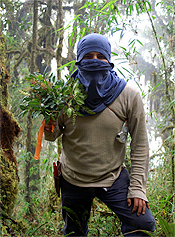 Photo courtesy of Miles Silman
Researcher William Farfan collects a species of Weinmannia near the treeline in the Andes.

Each of Silman’s tree plots is one hectare. Within each plot, every tree with a diameter of more than ten centimeters has been identified, tagged, and given a number. In plot 1, which sits at an altitude of 3,450 meters (11,320 feet) there are 569 trees 10 centimeters or wider, belonging to 38 different species. (This is greater than the number of tree species in all of Canada’s 290-million-hectare boreal forest.) In plot 4, at 2,750 meters (8,860 feet), there are 777 tagged trees from 60 species; more than 90 percent of these species are different from the species found at plot 1. In plot 8, at elevation 1,800 meters (5,905 feet) there are 1083 tagged trees from 117 different species. None of these species is the same as in plot 1.

Trees, of course, can’t move, but they can, in effect, migrate, by dispersing seeds that successfully grow into new trees. In the Andes, the temperature gradient is vertical, rather than horizontal; species can track the climate by migrating up the mountainside, instead of migrating latitudinally. The steep slope combined with the extraordinary diversity make the region, in Silman’s words, “a perfect laboratory” for studying the effects of climate change.

Currently, to track the climate, trees in the Andes should be migrating upslope at a rate of roughly 20 feet a year, and that rate will increase to 30 feet a year if carbon dioxide levels continue to climb. (Under a “business as usual” emissions scenario, temperatures in the eastern Andes are expected to rise by 9 degrees Fahrenheit by 2100.) While this is significantly less than the rate trees would need to move if they were going to track the climate by migrating to a higher latitude, it’s still very fast — quite possibly faster than trees in the region have ever migrated in the past. Among the questions Silman and his colleagues are hoping to answer with his plots are whether trees are in fact capable of moving rapidly enough to track climate change, and if not, what will happen.

Silman and his students first installed the plots in 2003. They re-censused them in 2007. Even after such a brief interval, one of Silman’s post-docs, Kenneth Feeley, found compelling evidence that some trees, were, in fact, on the move. Others, meanwhile, had remained stationary. Trees in the genus Schefflera, which includes the houseplant known as the umbrella tree, were moving the fastest; they had climbed upslope at the astonishing rate of nearly 100 feet a year. Trees in the coffee-family genus Ladenbergia, by contrast, had not migrated at all. For all the trees in the plots, Feeley, who now is on the faculty at Florida International University, calculated that the average migration rate was eight feet a year — significant, but not nearly enough for the trees to remain in equilibrium with the climate.

In a 2010 paper published in the journal Global Change Biology, Silman and Feeley looked at what differing “migration scenarios” would mean for Andean plants. Under what they called a “perfect migration” scenario, in which all species are able to migrate fast enough to track the climate, some plant species will lose out, but many others will gain population as the climate warms. Under a “no migration” scenario, virtually all species becomes losers, with population declines of between 53 and 96 percent. And under an “observed migration” scenario, where plants move as fast as they have been observed to do in the tree plots, species will lose, on average, 40 percent of their population.

Trees in the genus Schefflera had climbed upslope at the astonishing rate of nearly 100 feet a year.

In addition to speed of migration, another key variable, Feeley and Silman found, was land use. In the Andes, the highlands are often cleared for grazing — hence the cows we encountered at the top of the mountain — so the tree line is artificially depressed. If this pattern doesn’t change (and there’s no particular reason to believe that it will), then virtually all species now found at high elevations will decline, no matter how quickly they’re able to migrate.

“If the tree line stands still, it doesn’t matter what scenario you have,” Silman said.

That evening, we set up camp in a clearing near plot 4. Silman and Farfan went to get water, and when they came back, Farfan was carrying a spray of white berries interspersed with what looked like purple tassels. It was the infloresence of a tree in the Brassicaceae or mustard family. No one in the group had ever seen anything quite like it before, which led to speculation that it might belong to yet another new species. It was doused in alcohol for transport down the mountain, because especially now, with the future of the forest so uncertain, it seems important that every species be counted.