Water from the iced-over Connecticut River numbed my hands as I cradled a hard, scaleless fish at the U.S. Geological Survey’s anadromous fish laboratory at Turners Falls, Massachusetts. Its back was dark brown, its belly cream. Five rows of bony plates ran the length of its thin body to the shark-like tail. Four barbels covered with taste buds dangled from its flat snout in front of the sucker mouth. At 20 inches it was a baby. Adults can measure 14 feet and weigh 800 pounds.

This fish was an Atlantic sturgeon — the largest, longest-lived creature that reproduces in North American rivers collected by the Atlantic. Its species is at least 70 million years senior to my own.

Yet my species threatens it with extinction. 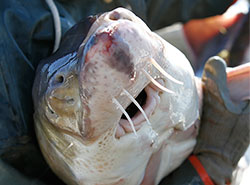 While that threat is still very real, it was reduced on February 6, 2012, when the National Marine Fisheries Service (NMFS) protected five “distinct population segments” of Atlantic sturgeon under the Endangered Species Act. The Gulf of Maine segment was listed as threatened while the New York Bight, Chesapeake Bay, Carolina, and South Atlantic segments were listed as endangered.

This action has released a torrent of funding that is allowing researchers from Maine to Florida to identify and mitigate human-caused mortality.

Nowhere has the population crash been more catastrophic than in the Delaware River, the East’s longest undammed waterway, draining 13,539 square miles from New York State through Pennsylvania, New Jersey, and Delaware. In the 19th century 75 percent of sturgeon caught in the U.S. came from the Delaware, then known as the “caviar capital of North America.” According to the NMFS, there used to be something like 180,000 ripe females entering the river in any given year. Now the agency figures there are fewer than 100.

Atlantic sturgeon live in the ocean and spawn and spend their first few years in freshwater. Females don’t reach sexual maturity until they’re about 16, and they lay eggs only every three to five years. So populations can’t rebound quickly.

The eggs are sticky, but only for about 30 minutes during which they must adhere to clean substrate. Silt from watershed development dooms them. That’s a problem in the Delaware and range-wide.

In the lower Delaware, the world’s largest freshwater port, sturgeon keep getting killed by ships. “Adults move up the navigation channel,” explains Delaware State University fisheries professor Dewayne Fox. “It’s dredged to 40 feet, and some ships bump on bottom; you can see the scour marks. When you have two ships with 20-foot-diameter propellers passing in opposite directions that takes 25 percent of the channel. We get a lot of animals cut in half.”

More dredging by the U.S. Army Corps of Engineers will further shrink spawning and nursery habitat by blasting away rock ledge critical to egg and fry development and by causing saltwater to move further upstream where habitat shrinks anyway as the river narrows.

The NMFS has major concerns about the project, warning that “dredge gear used in the Delaware is known to injure or kill Atlantic sturgeon” and that saltwater intrusion may inhibit reproduction.

“And yet NMFS just sat back and let it happen,” says Maya van Rossum, leader of the Delaware Riverkeeper Network, a nonprofit membership outfit dedicated to protection of river and watershed. Her organization challenged the project in court and lost.

But it usually prevails in legal actions. For example, when the NMFS failed to designate “critical habitat” for Atlantic sturgeon for more than two years after the ESA listing, the Delaware Riverkeeper Network and the Natural Resources Defense Council sued, winning a settlement. Critical habitat designation, which by law must happen within a year of listing, is now underway.

To cool the reactor rods of its Salem Nuclear Power Plant in southern New Jersey the Public Service Enterprise Group (PSEG) daily sucks up 3 billion gallons of Delaware River water and with it all manner of fish eggs and juveniles. Adults are crushed against intake screens. According to PSEG’s own figures, the plant annually kills about three billion fish and other organisms, sturgeon included. Converting to a closed-loop system by which river water is re-circulated and cooled by towers would reduce fish mortality by about 95 percent. But this would probably cost $400 to $800 million, and PSEG is loath to make the investment.

Because Atlantic sturgeon are similar to humans in life span, recovery is slow and easily unnoticed.

The State of New Jersey has allowed the plant to operate without a discharge permit since 2006, making it impossible for van Rossum and her allies to vet permit requirements relevant to fish kills. So the Delaware Riverkeeper Network, the New Jersey Sierra Club, and Clean Water Action sued the state, winning a settlement in November under which a permit is now being drafted.

Despite all the threats confronting Atlantic sturgeon, their prognosis is less bleak than previously thought. Because these fish are similar to humans in life span and maturity, recovery is slow and easily unnoticed. It wasn’t until 1998 that the Atlantic States Marine Fisheries Commission imposed a moratorium on commercial take — so one wouldn’t expect to see solid evidence of recovery even now, especially in the Delaware where the caviar industry had virtually eliminated the species.

But researchers may be seeing early signs of recovery. Delaware Division of Fish and Wildlife biologist Ian Park reports that he and his colleagues are starting to capture sturgeon so small they couldn’t have been spawned outside the Delaware.

For decades, pollution below Philadelphia deprived the river of oxygen in exactly the area young sturgeon most needed it. They died, and adults stopped as if they’d hit a dam. Now thanks to passage of the federal Clean Water Act in 1972, oxygen levels are up, and the Delaware Basin Commission is pushing for higher water-quality standards.

‘Spawning Atlantic sturgeon are showing up in rivers where they were never thought to exist.’

Commenting on the prognosis elsewhere in the range, Delaware State University’s Fox offers this: “Spawning Atlantic sturgeon are showing up in rivers where they were never thought to exist. People point to the 1998 fishing ban, but it’s also probable that we weren’t looking in the right places.”

Now, with money made available by the Endangered Species Act (ESA), researchers are looking in the right places and, more important, determining human-caused threats and devising mitigation. For example, gillnets set at sea for monkfish and skate turn out to be a major source of sturgeon mortality. So Fox and his team are working with fishermen to devise nets with lighter twine that big sturgeon can break, and larger mesh that smaller fish can pass through. 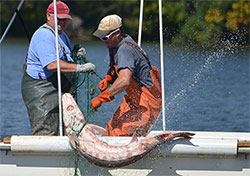 Researchers capture a sturgeon in Chesapeake Bay, where they were presumed to be wiped out. JAMES BRUNKOW/JAMES RIVER ASSOCIATION

This kind of research is being driven by the NMFS. While the agency has traditionally been less than aggressive in defense of depleted fish, it may be making progress. “One thing NMFS did that I think is unheard of is that they actually brought on additional staff prior to listing,” says Fox. “Anticipating that listing was going to happen, they pushed the research community a year in advance to get in our scientific collection permit requests because it was going to take that long to process them. I had my permit the day of the ESA ruling. And I wasn’t alone.”

Moreover, the ability of the NMFS to stop projects like dredging is limited. All it can do is consult with the Corps of Engineers under Section 7 of the ESA. Then, if it determines the species in “jeopardy,” it can merely suggest prudent measures to minimize damage.

For 30 years biologist Tom Savoy of the Connecticut Department of Energy and Environmental Protection told people that Atlantic sturgeon had been extirpated from the Connecticut River 200 years ago. Now, thanks to ESA funding, he’s eating his words. “In the last couple years we’ve seen fish too small to have emigrated from other systems,” he told me. “We’ve surgically implanted acoustic transmitters into larger fish. There’s a lot of mixing between population segments; we’re seeing fish from the Hudson and the Delaware. We had one fish that went to Cape Canaveral, Florida — farther south than they were supposed to go. We’ve really expanded our knowledge of sturgeon. The old story was that young didn’t leave for 6 to 8 years. Now we’re seeing fish leave at 2.”

The sturgeon I caressed at the USGS anadromous fish laboratory was part of an ESA-funded project to determine if reproduction is being compromised by such “endocrine disrupters” as sewage-borne residue from birth-control pills. The bad news: It almost surely is. The good news: Because we know about the threat we may be able to lessen it, perhaps by modifying disposal, sale, or application of at least some of the disrupters.

Atlantic sturgeon didn’t make it for 70 million years without being resilient.

At the lab I met with biologist Micah Kieffer who is part of an ESA-funded research team studying the Gulf of Maine sturgeon population segment. With acoustic transmitters it has implanted in sturgeon from Maine’s Kennebec River, the team has documented heavy migration into the Bay of Fundy (between New Brunswick and Nova Scotia) where fish get eviscerated in tidal hydro-generating turbines. Mortality can be reduced by screens.

“About 15 years ago we declared the Atlantic sturgeon extirpated in the Chesapeake Bay system, and much to my delight we were very wrong ,” says David Secor, fisheries ecologist at the University of Maryland Center for Environmental Science. “I’ve been with this story for much of my career, and it has taught me a lot of humility. The fish are telling us things we never expected. For instance, this past year we’ve discovered spawning adults in a small Eastern Shore tributary where we’d never have thought to find them and way higher than I’d ever have guessed.” The tributary, the Nanticoke River, is polluted and silted by chicken farms and urban and agricultural development.

Atlantic sturgeon didn’t make it for 70 million years without being resilient. And you don’t have to cut them much slack, as Matt Balazik, a fisheries biologist with Virginia Commonwealth University, has discovered. In 2007 he got a call about a dead Atlantic sturgeon in the James River where everyone “knew” they no longer existed. He never found it, but when he was looking he was astonished to see adult sturgeon breaching. “This was next to the farmhouse I grew up in,” he says. “Sturgeon weren’t there then because we’d have seen them. We saw big fish kills, but never a dead sturgeon. I think improved water quality has helped.”

The waters off the coast of New England are warming more rapidly than almost any other ocean region on earth. Scientists are now studying the resulting ecosystem changes, and their findings could provide a glimpse of the future for many of the world’s coastal communities.
READ MORE

Everyone also “knew” that sturgeon spawned only in spring. But Balazik suspected otherwise because he was seeing mature fish in fall. He had proof in the fall of 2011 when his team gillnetted an ovulating female. “If we were sampling just in spring, we’d have said the species is gone,” declares Balazik. “We caught 110 adults this past fall; and we just stopped because we had enough for our population model. ESA funds have been very helpful. Before the listing we were working on a shoestring.”

In the Chesapeake watershed, Atlantic sturgeon runs have recently been discovered in the James, York, Marshyhope, Nanticoke, and Rappahannock rivers. And Balazik thinks they’re in the Potomac.

Keeping Atlantic sturgeon on the planet won’t be easy or cheap; but now we know it’s possible.

Maybe the greatest value of the Endangered Species Act — greater even than information it generates about how and where animals live and the threats they face — is the knowledge that it’s not too late to save them. Emily Dickinson had it right when she wrote that “hope is the thing with feathers.” But it’s also the thing with fins.