The way Dara O’Rourke tells the story, the idea for GoodGuide came to him when he was slathering some suntan lotion onto his three-year-old daughter’s face. O’Rourke, an associate professor of environmental and labor policy at University of California, Berkeley, wondered about the ingredients in Coppertone Water Babies; he did some research and learned it contained oxybenzone, a potential skin irritant. Later, O’Rourke found out that Johnson’s Baby Shampoo contained trace amounts of 1,4-dioxane, a probable human carcinogen. “It shocked me,” he says, “that I basically knew nothing about the products I was bringing into my own house.”

Are there enough ‘conscious consumers’ to make an impact?

and nutritionists, who rate more than 165,000 products, including personal care items, household cleaners, food, toys, appliances and electronics. Each product gets a numerical rating from 1 to 10 in three categories — health, environment, and society; the ratings are then made available on GoodGuide’s Web site, on Facebook and on smartphones.

O’Rourke describes GoodGuide as a social enterprise, meaning the firm has a purpose that goes beyond making money: It aims to persuade consumers to vote with their wallets for environmentally-friendly products and companies, and thereby help tackle big problems, including climate change, biodiversity loss, and industrial pollution.

“There definitely is a growing percentage of consumers who are aware and who care and who are seeking out products that have better environmental, social, and health attributes,” O’Rourke says. “We view those consumers who care as point of leverage over these big, big systems.” These “conscious consumers,” as they’re sometimes called, are important to the work of activist groups who bring pressure on corporations to reform their environmental or social practices; companies feel compelled to respond because they don’t want to alienate even a small share of their customers or potential customers.

It’s a reasonable theory of change. But does it work? Are there enough conscious consumers to make an impact? Shoppers may tell market researchers that they want to buy “greener” products — but can they be motivated to act? 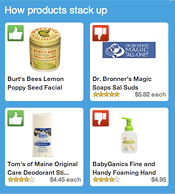 GoodGuide
GoodGuide ranks products on — among other factors — their impacts related to climate change, biodiversity loss, and pollution.
Questions like those face not just O’Rourke and GoodGuide, but many companies and nonprofits that are betting on the power of green consumers. Greenpeace, for example, rates the world’s largest electronics companies on their sustainability practices with the hope that consumers will reward leaders and punish laggards. (This tactic is known in the NGO world as “rank ‘em and spank ‘em.”) Similarly, nonprofit Climate Counts scores big corporations on their efforts to mitigate climate change and urges consumers “to use their choices and voices” to pressure more companies to act. Taking a slightly different approach, BuyGreen.com is a shopping Web site that positions itself a “trusted source for green products.”

The most ambitious effort of all, a global initiative known as The Sustainability Consortium — which was received startup money from Walmart and now includes retailers, consumer products companies, and universities — is building scientific tools to measure and report on the lifecycle impact of thousands of products; but its progress has been painfully slow.

No one doubts that green consumers can make difference. They can be credited for the success of a slew of small and mid-sized U.S. companies like Annie’s Homegrown, Seventh Generation, and Stonyfield Farm that have built brands imbued with environmental goodness. (Annie’s, best known for its organic mac and cheese, had sales of nearly $120 million in 2011 and had a successful IPO last month.)

Jeffrey Hollender, the former CEO of green-cleaning company Seventh Generation, says the success of these socially-responsible insurgents has changed the practices of big companies. SC Johnson, for instance, listed all of the ingredients in its products only after Seventh Generation had done so. “Successful companies have learned to be incredibly sensitive to consumers,” Hollender says.

Since the launch of GoodGuide in 2007, O’Rourke says, more than 12 million people have visited the company’s Web site and used its mobile applications. Companies are paying attention, too, and taking steps to improve their

‘We’re going up against millions of dollars of marketing,’ says GoodGuide’s founder.

product scores. “Basically, all of the consumer products companies are calling us up and want to interact,” O’Rourke says. While it’s difficult to trace any specific change to GoodGuide, Johnson & Johnson and Procter & Gamble have reformulated their shampoos to reduce toxins, including 1,4-dioxane. And Clorox created Green Works, a line of cleaning products on which it has partnered with the Sierra Club.

In opinion surveys, large majorities of consumers consistently tell researchers that they care about environmental and social issues. But the numbers that really count — those at the cash register — tell a different tale. While hybrid cars are trendy, their market share peaked in 2009, at less than 3 percent of all new vehicles sold. Green laundry detergents and household cleaners make up less than 5 percent of sales in their categories, industry insiders say. Organic foods provide an impressive growth story — their sales have ramped up from $1 billion in 1990 to $26.7 billion in 2010, according to the Organic Trade Association; but their popularity is driven more by health concerns than by environmental awareness.

This debate isn’t new. Joel Makower, the founder of media company GreenBiz, is skeptical about the power of green consumers — to whom he has been paying close attention since 1991 when he was co-author of a book, The Green Consumer. “A small percentage of consumers, by changing their habits, can move markets,” Makower says. “It’s an incredibly compelling notion. I just haven’t seen it in the market.”

The idea of buying green simply doesn’t seem to drive consumer behavior, Makower notes. “Why we can’t move people to a greener household cleaner or a recycled bathroom tissue or an energy efficient light bulb in greater numbers than we’ve seen so far is one of those enduring mysteries,” he says.

In an interview at GoodGuide’s offices in San Francisco, O’Rourke admits that the company still has a lot to prove. (The 44-year-old academic is now chief sustainability officer at GoodGuide; the board hired George Consagra, a longtime technology executive, as CEO last year.) “I want to be honest about hard this is,” O’Rourke tells me. “Originally we thought that information will set you free. But we’re going up against millions of dollars of marketing.”

And yet marketing isn’t what it used to be, he notes. No longer can companies control their message. More than a decade ago, O’Rourke learned firsthand how putting a spotlight on corporate malfeasance can drive change. As a graduate student at Berkeley in 1997, he was researching

When shopping online, customers can now see how products perform on issues they care about.

pollution from factories in Vietnam when he came across a leaked internal document about a Nike shoe supplier. It showed that workers were exposed to carcinogens that exceeded legal standards, suffered from respiratory problems, and were forced to work 65 hours for just $10 a week. He provided his findings to The New York Times and posted a report on the Internet, setting off a controversy that led to a turnaround at Nike, which is now seen as a corporate leader on environmental and social issues.

His experience with Nike “showed both the potential of a new way to distribute information, and, for me, how important it is to get my research out to the public,” O’Rourke says. “GoodGuide is basically an extension of that.”

GoodGuide began with a mobile phone app that required consumers to photograph bar codes to get data on individual products. It then posted reams of information on its Web site. Now it offers a popular iPhone app, as well as software called a Transparency Toolbar that attaches to a Web browser. When shopping online at Amazon, Walmart, Target, and other sites, shoppers can see how products perform, according to GoodGuide, on issues they care about. A GoodGuide app can also ride atop Facebook, rating the products and companies in any ads that appear. GoodGuide intends to make money by providing specialized data to retailers or institutional buyers, such as hospitals; it currently generates revenues when consumers go through GoodGuide’s Web site or toolbar to make purchases on Amazon.

The company’s goal is to “get into the flow of the shopping experience and try to provide the right information at the right moment,” O’Rourke says. GoodGuide has offered to make its data available for display on supermarket and drugstore shelves, but so far it has found no takers. Some retailers may worry about how their store brands would perform; others make money by selling prime shelf space to specific brands, so negative ratings could get in the way of that business.

The recyclable plastic bags you get at the green grocer are not biodegradable. But, as Daniel Goleman writes, the product life-cycle assessments that will become more prominent in the marketplace fail to consider whether those bags will break down in landfills or just end up as litter.READ MORE
Still, it’s only going to get harder to keep consumers in the dark. Environmental groups and consumers are pressing to learn more about how and where things are made. Campaigns around palm oil in Kit-Kat bars, BPA in baby bottles, and, most recently, the ammonia-treated ground beef extender known as “pink slime” have all triggered rapid reactions from business. “Spikes of information, or misinformation, in social media can pressure business practices in a big way,” says Jonathan Yohannan, an executive vice president at Cone Communications.

In such instances, the consumer doesn’t need to act. Merely the fear of exposure and a backlash can spur change. Says O’Rourke: “Transparency is moving forward. That’s unstoppable. Our big bet is that transparency is going to motivate change.” It’s too soon to say whether that bet will pay off.