The humble camera trap — an automated digital device that takes a flash photo whenever an animal triggers an infrared sensor — has been coming into its own, playing an increasingly important role in wildlife conservation.

In recent years, the use of camera traps has led to major discoveries, including documenting an Amur leopard (Panthera pardus orientalis) in China for the first time in 62 years; proving that the world’s rarest rhino, 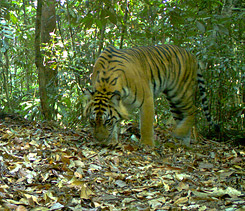 WWF-Indonesia
A Sumatran tiger photographed during a recent survey in Indonesia.

the Javan (Rhinoceros sondaicus), is breeding, by photographing a female with her calf; rediscovering the hairy-nosed otter (Lutra sumatrana) in the Malaysian state of Sabah; recording the first wolverine (Gulo gulo) in California since 1922; taking the first video of the rare Bornean bay cat (Pardofelis badia); documenting the elusive short-eared dog (Atelocynus microtis) preying on an amphibian in the Amazon; proving the extremely rare Siamese crocodile (Crocodylus siamensis) still inhabits Cambodia; and snapping the first-ever photographs of a number of species in the wild, including the Saharan cheetah (Acinonyx jubatus hecki) and the giant muntjac deer (Muntiacus vuquangensis) in Southeast Asia.

The technology has even been behind the discovery of a few new species: Both the Annamite striped rabbit (Nesolagus timminsi) of Southeast Asia and the grey-faced sengi (Rhynchocyon udzungwensis) of Tanzania, an elephant shrew, were first identified via camera trap photos. One measure of the camera trap’s rising importance was the release last February by the Smithsonian Institution of more than 200,000 camera trap photos online.

The camera trap has revolutionized wildlife research and conservation, enabling scientists to collect photographic evidence of rarely seen and often globally endangered species, with little expense, relative ease, and minimal disturbance to wildlife. Researchers are now using camera traps to document wildlife presence, abundance, and population changes, particularly in the face of deforestation and habitat destruction. And for the first time, camera traps are enabling researchers to collect baseline population data on tropical mammals and birds where only estimates — and often just guesses — were possible before.

Equally important, camera traps are increasingly being used to raise conservation awareness worldwide, with NGOs embracing the tool as a powerful way of reaching out to the public through You Tube, the Internet, and social networking sites. Groups such as WWF have found camera trap videos and photos to be an important part of campaigns to save threatened or endangered species.

In Sumatra, which has lost half of its forest cover since 1985, a conservation project called Eyes on Leuser is using camera trap videos and photos to publicize the threats to the Leuser forest’s diverse wildlife. To date the group has used camera traps to shoot video footage of 27 species, including the rare Sumatran tiger (Panthera tigris sumatrae), the colorful Argus pheasant (Argusianus argus), and the bright-eyed banded civet (Hemigalus derbyanus). “Until now, almost no videos existed of most of Leuser’s cryptic wildlife,” says Marten Slothouwer, a Dutch conservationist who runs Eyes on Leuser. “Our videos can make people realize that it’s worth it to save this forest.”

The first cameras to capture wildlife free from human presence were used in the late 1890s by photographic pioneer George Shiras, who employed trip wires and a flash bulb to catch animals on film; the photos were eventually published in National Geographic magazine. The first purely scientific use of camera traps was in the 1920s, when Frank M. Chapman surveyed the big species on Barro Colorado Island in Panama using a trip-wire camera trap.

But for decades, technological difficulties — including battery power, size of equipment, and unreliable trip mechanisms — left camera trapping for intrepid enthusiasts, rather than mainstream researchers. Not until the 1990s did a camera with an infrared trigger mechanism become available. Today, with the advent of digital cameras, the practice of studying wildlife through camera trapping has exploded.

Although the majority of camera trap photos are blurred or show only parts of an animal, some are on a par with the best in wildlife photography, capturing one thing that is truly difficult for photographers: a palpable sense of intimacy. More discoveries are expected as researchers undertake new and larger projects, including a study of tropical mammals in seven nations by The Tropical Ecology Assessment and Monitoring Network, which is documenting long-term wildlife population trends in order to identify conservation priorities. 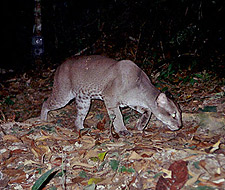 There is no tool better for finding out “what’s out there” than the camera trap. Scientists usually place camera traps on trails or at watering holes or mud wallows (spots where animals or birds often appear), but also at locations where researchers can access the camera repeatedly to download photos and change batteries. Within a few months of setting up traps, scientists begin to gain a good sense of which large and medium-sized fauna reside in the area.

“Camera trapping provides a window into a world that was previously only accessible to researchers or individuals with intimate knowledge of that species or habitat,” says Brent Loken, president of Ethical Expeditions, which uses camera traps to collect data on the mammals of the Wehea Forest in the Indonesian state of Kalimantan. The traps have proven the existence of elusive mammals, such as the banded civet (Hemigalus derbyanus) and the Sunda clouded leopard (Neofelis diardi), one of the least known big cat species in the world.

In the Pantanal, Brazil’s great wetlands, Arnaud Desbiez of the Royal Zoological Society of Scotland has used camera traps to document the presence of the world’s largest armadillo (Priodontes maximus) — a rare, nocturnal species that spends much of its time underground. Using camera traps, he and his team have discovered that giant armadillo burrows play a bigger role in the ecosystem than anticipated, providing shelter to creatures such as collared peccaries.

In Africa, Ben Colleen of the Zoological Society of London and his colleagues have used camera traps to study rare pygmy hippos in West Africa’s dwindling rainforests. The species is so mysterious that researchers only took the first photo of a wild pygmy hippo in Liberia in 2008.

Camera traps could be used in rainforest canopies to study birds, reptiles, and monkeys.

Also in Africa, camera traps recently set up in Gabon took the first publicly released video of the African golden cat, the least-known feline on the continent. Unlike the other cats of Africa, the golden cat only inhabits rainforest, making it extremely difficult to spot, let alone study. University of KwaZulu-Natal graduate student Laila Bahaa-el-din captured footage of an African golden cat sitting directly in front of the camera and chasing a butterfly. On watching the videos for the first time, Bahaa-el-din says, “I felt, at last, like I was getting to know this elusive cat… The African golden cat has dominated my thoughts and energy for over a year-and-a-half now.”

Bahaa-el-din’s research is focused on understanding how the wild cat fares in pristine areas versus sustainably managed logging concessions and poorly managed logging tracts. Camera trap video footage taken in a logging concession in central Gabon that employs sound logging practices and aggressively pursues illegal hunters, indicates, says Bahaa-al-din, that “logging alone should not mean the depletion of wildlife.” The evidence from these camera traps will eventually be used to develop a conservation plan for the African golden cat, now getting its first global publicity thanks to the remote cameras.

Camera traps have some drawbacks. As Arnaud Desbiez puts it, “Camera traps are limited in space. They can only gather information in the tiny area where their sensors are positioned. Therefore animals can easily go undetected, and you need a lot of cameras to properly survey an area.”

The cost of camera traps also can be an issue, especially in developing countries. A single camera trap ranges from $150 to $600, not including extra batteries, battery chargers, and data cards. Camera traps also break; tigers, elephants, and other big mammals have been known to attack the traps. In addition, in areas where poachers are a problem, scientists occasionally lose camera traps to people who understandably don’t like their photo being taken.

Still, camera trapping is now on the cusp of a new round of expansion. Camera traps could be used in rainforest canopies to study birds, reptiles, and monkeys, and underwater cameras could document marine wildlife and the fauna of lakes and rivers. With further technological advances, it may even be possible to use tiny cameras to document the world’s micro-species, from stag beetles to brush-footed butterflies.

Indeed, proponents contend, the future of camera trapping may only be limited by our imagination.