As mayor of Dallas from 2002 to 2007, Laura Miller helped lead the charge against a utility company called TXU that wanted to build 11 coal-fired power plants in Texas. Miller and her allies, including the Environmental Defense Fund and the Natural Resources Defense Council, stopped the coal plants, and in 2007 TXU was sold to two private-equity firms that promised to steer the company onto a greener path. Their story inspired a documentary film produced and narrated by Robert Redford that showcased Miller, as one magazine writer put it, as a “tough, smart and camera-friendly environmental heroine.”

Today, Miller, 53, who was a newspaper reporter before entering politics, again finds herself in the thick of a big Texas story about coal. This time, she’s trying to get a coal plant built — one that she says would be “the cleanest coal plant in the world.” As director of Texas projects for Summit Power, a Seattle-based energy firm, Miller has spent three years working on behalf of the Texas Clean Energy Project, an unusual $3 billion power facility that would capture carbon dioxide emissions and produce oil as well as coal.

To listen to this content, you must have Javascript enabled in your browser preferences. You will also need to download the latest Flash Player.

You may also download the audio file.
Coal is, of course, the bane of climate-change activists. But Miller has secured the tacit support of environmentalists, including her old allies at the Natural Resources Defense Council (NRDC) and the Environmental Defense Fund (EDF), for the Texas coal plant. They say the plant could help move the global power industry toward a goal that has proven elusive: low-carbon electricity made from coal.

“With 300 years of coal in the ground, the United States needs to find out how to use it in a clean way,” Miller says. “This will raise the bar on all the other coal plants being built. It’s just a matter of spending the extra money to make something that was once dirty become clean.”

John Thompson, the director of fossil transition for the nonprofit Clean Air Task Force, agrees. “This is a globally significant project,” he says. “Carbon capture and storage is so important that I don’t think we can avert the worst aspects of climate change without its wide-scale adoption.”

That may well be true, but the prospects for clean coal remain uncertain at best. To understand why, it’s important to distinguish between carbon capture and storage (CCS) and what the coal industry and some electric utilities tout as “clean coal.” The industry uses the phrase to describe state-of-the-art pulverized-coal plants, which crush coal into a fine powder before it is burned; these plants emit fewer conventional pollutants (sulfur dioxide, particulates and mercury) than older plants, but they are big emitters of CO2. The average U.S. plant emits 2,249 pounds of CO2 for every megawatt hour (MWh) of electricity it generates, according to the U.S. Environmental Protection Agency. Capturing and storing CO2 could reduce those emissions dramatically, but it’s expensive. 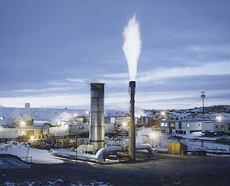 Photo courtesy of llnlphotos.
The U.S. Department of Energy’s Rocky Mountain Test Facility, where coal gasification technologies being used in the Texas Clean Energy Project were demonstrated.
Summit Power’s Texas project is planned for a 600-acre plot of land in the ghost town of Penwell, near Midland-Odessa in west Texas. (The site was previously a finalist for the U.S. Department of Energy’s ill-fated FutureGen clean-coal plant.) The company intends to build a 400-megawatt power plant that would all but eliminate conventional pollutants and capture 90 percent of its CO2 emissions, according to Eric Redman, the company president. He says CO2 emissions would amount to about 200 pounds per MWh, making the Texas plant far more climate-friendly than even the best combined-cycle natural-gas plants, which emit about 850 to 1,000 pounds per MWh.

The technologies to accomplish this are well established. “There’s no breakthrough here,” Redman says. Coal can be “gasified” using a thermo-chemical process that strips it of pollutants including sulfur and mercury and separates virtually all of the CO2. This produces a flammable low-carbon synthetic gas, or syngas. (“A gasifier is like a refinery for coal,” Redman says.) The syngas is then burned to make electricity, and the captured CO2 is compressed into a semi-liquid. Compressed CO2 can be sold for enhanced oil recovery (EOR) in the oil-rich Permian Basin, where the project is located — just a mile from a 3,000-mile network of pipelines dedicated to CO2.

The potential transformation of CO2 from a greenhouse gas pollutant into an asset is one reason why the Department of Energy awarded the plant $450 million in grants. “If I’m venting CO2 from a plant, and I can use it as a product and not as a waste stream, I’m going to do it all day long,” says Charles McConnell, assistant secretary for fossil energy at the DOE. Texas has used CO2 to extract oil from hard-to-reach underground

Carbon capture and storage will require subsidies or carbon regulation to compete with conventional plants.

formations for decades, but most of it is piped in from elsewhere — Mississippi, New Mexico and Colorado — and natural supplies are limited.

What’s most innovative about the Texas plant, in fact, is a business model that depends on three major revenue streams, buttressed by the government grants and more than $1 billion in potential tax benefits realizable over a 10-year period. One source of income is the sale of CO2, for which demand is growing briskly in the oil patch. A second source of revenue, according to Summit, will be sales of urea fertilizer, which will be produced from syngas not burned for power.

Finally, the plant will sell electricity, although only about 200 MW of the plant’s 400MW capacity will flow into the grid; the rest will be used to power the project’s operations, including the urea plant and CO2 compressors. Summit has contracted to sell the electricity to the city of San Antonio, the CO2 to an oil company called Whiting Petroleum (among others), and the fertilizer to an unnamed buyer. It also intends to sell carbon credits, potentially in California’s regulated carbon market.

U.S. Department of Energy
The gasification process breaks down coal into its basic chemical constituents that can be used for many commercial purposes.
Despite all this, the plant is not yet fully financed, and its prospects are uncertain. RBS Securities, a unit of the Royal Bank of Scotland, has been hired by Summit to raise money; its offering says that “an estimated $700 million of additional equity and $300 million of debt” will be needed to complete construction. Most of that is now lined up, Redman says, but the company still needs a lead equity investor. Construction is expected to take three to four years.

Howard Herzog, an expert on carbon capture at the Massachusetts Institute of Technology (MIT), says the Summit project could help move the industry closer to low-carbon coal. But, he says, carbon capture and storage will require either government subsidies or carbon regulation to compete with conventional coal or natural gas plants. “Ultimately, if you’re going to see CCS in the market, you’re going to have to some kind regulatory forcing,” Herzog says.

Maybe the most remarkable thing about the Summit plan is that it sailed through the Texas regulatory process with no opposition, at a time when groups including the Sierra Club were running hard-hitting campaigns to shut down existing plants and stop new ones. To be sure, none of the

The U.S. needs to develop lower-carbon technology and sell it to China and India, an NRDC official says.

environmental groups has formally endorsed the plant. Bruce Nilles, director of the Sierra Club’s Beyond Coal initiative, said activists have more important battles to fight. “We’re not against demonstrating new technology,” he noted. More enthusiastic is David Frederick, an environmental lawyer who has worked for the Sierra Club and agreed to represent Summit Power in its effort to obtain an air permit. Why? By email, Frederick replied: “There is a Saudi Arabia of coal in the US, and, in the fullness of time, folks might use it. The Summit plant, if successful, would offer an incredibly low-CO2 way to use it.”

There’s another big reason why environmentalists favor efforts to develop carbon capture: China, and its vast reserves of coal. “If no other country in the world existed other than China, it would warrant the development of CCS [carbon capture and storage],” says David Hawkins, director of climate programs at NRDC. Jim Marston, who leads EDF’s Texas office and directs its national energy program, told me: “We probably don’t need coal plants in the U.S. But China and India are likely to build coal plants, and we need to demonstrate that there is much lower carbon technology out there at an affordable cost. In fact, we ought to develop that technology and sell it to them.”

Summit’s Texas project is one of three big coal plants under development in the U.S. that intend to capture carbon and use it to recover oil. Tenaska, a Nebraska-based energy company, wants to build a 600-MW plant near Sweetwater, Texas, that uses a post-combustion capture process to cut CO2 emissions by 85 to 90 percent. In Kemper,

Rethinking Carbon Dioxide:
From a Pollutant to an Asset

Three startup companies led by prominent scientists are working on new technologies to remove carbon dioxide from the atmosphere. The scientific community is skeptical, but, as Marc Gunther writes, these entrepreneurs believe the process of CO2 removal can eventually help cool an overheating planet.
READ MORE
Mississippi, construction has begun on the Southern Co.’s 582-MW plant that will use coal gasification to reduce its emissions by about 65 percent. The Sierra Club has opposed those plants, citing water issues in Texas and land use, cost and pollution issues in Mississippi. Meanwhile, China, Canada, the Netherlands and the UK are developing their own large-scale CCS-EOR projects, according to an MIT CCS database.

If all these projects pan out, carbon-capture proponents contend, “clean coal” could emerge as a climate-friendly source of base-load electric power. Meantime, vast reserves of domestic oil in places like the Permian Basin could be unlocked by the newly produced CO2, easing pressures to drill in pristine areas like Alaska.

“It’s the beginning of a new industry,” says John Thompson of the Clean Air Task Force. “As soon as these projects go online, everything that’s in operation seems obsolete. These are game-changers.”