Down a dark corridor of a university campus in Beijing, a gold plaque on a wall of peeling paint marks the home of the Centre for Legal Assistance to Pollution Victims, a small office that is arguably the epicenter of public-interest law in China.

Inside the cramped suite, shelves buckle under the weight of binders stuffed with thousands of hand-written accounts of polluted rivers and contaminated fields across China. Embroidered gold and maroon tapestries adorn the walls, gifts from the villages whose legal cases the center has helped win.

Xu Kezhu is the center’s deputy director and an environmental law professor at the China University of Political Science and Law, where its offices are housed. Unlike most of her academic colleagues, she is interested in the law not only as theory, but in practice. “China has many good environmental laws,” she told me. “The problem is enforcement.” 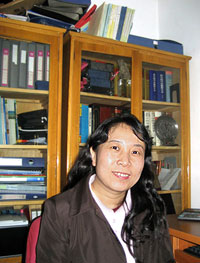 When I visited, the surprisingly jovial law professor was wearing a loose maroon suit jacket, pink blouse, and black slacks. In her mid-40s, she has long black hair falling well past her shoulders and a bright broad smile. Her window looks out on a dingy Beijing sky. Her screensaver is a photo of the Capitol building in Washington, D.C., a white dome against a clear blue horizon.

During the last three decades, China has put increasingly ambitious environmental regulations on the books, but implementation lags far behind principle. In recent years, even as the central government has become more concerned about controlling pollution, China’s environmental woes have intensified. Although Beijing vowed in 2002 to reduce sulfur emissions by 10 percent in three years, those emissions rose nearly 30 percent. (In 2006, the chair of China’s environmental committee complained that some provincial governments upheld less than a third of Beijing’s green laws.) Today thousands of unlicensed mines across China leach mercury into the soil.

The challenge of coordinating environmental enforcement across multiple levels of government — with central authorities often looking at the long-term picture, while regional officials remain more concerned about quick economic gains and local protectionism — is not unique to China.

But in the United States, for instance, two key mechanisms absent in China help enforce federal laws. First, the U.S. Environmental Protection Agency has direct oversight over local environmental bureaus and can intervene when regional officials ignore rulings. In China, the opposite is true: Local environmental officials report to the provincial governments, who have an economic interest in shielding local industry. Also in the United States, independent environmental lawyers can sue the executive branch when laws, such as the Clean Water Act or Clean Air Act, aren’t upheld. In China, there is no long-standing tradition of taking the government to court.

Today, however, Xu Kezhu is one of a growing number of legal mavericks working to change the system. Xu told me that her goals are twofold: to “promote enforcement of environmental law,” and to “tell the public how to respond when your rights are violated.” The notion of rights is itself new in China — in the realm of environmental protection, or otherwise.

A dozen years ago, Xu Kezhu was purely a professor of environmental law at her university. “Back then my work was very academic,” she says, “not as practical.” In 1996, she moved with her husband, a diplomat, to Spain. During her first extended stay outside China, she was taken by Madrid’s blue skies and by the concept of local civic organizations — people outside of government championing the public interest.

When she returned home two years later, she saw things differently. “I realized we had a very serious pollution problem in Beijing.” From the window of her apartment, on the 16th floor of a Beijing skyscraper, she noticed that thick smog often hid the surrounding buildings, and she could smell the air pollution even inside. “Just to teach environmental law was not interesting to me anymore,” she said. “I thought, ‘I must use my knowledge.’” 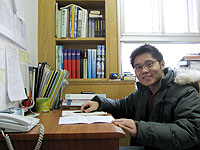 In 1998, Xu and a fellow law professor at the university, Wang Canfa, whom Time magazine named as one of its 2007 “Environmental Heroes,” co-founded the Centre for Legal Assistance to Pollution Victims. The next year, they opened a free legal advice hotline, the first of its kind in China.

Initially, Xu spent three or four days a week manning the hotline. Today the phones are answered by a growing group of volunteers — law professors and young law students drawn to the center’s mission — who field legal inquiries and record each complaint for their files. Of those calls, the center’s staff has taken up more than 80 cases: They’ve won a third, lost a third, and a third are still pending.

One case Xu is currently working on in Hunan province is emblematic. In 2001, a chemical processing plant opened in Hunan’s Shutangshan village. Although the factory provided the local government with a faulty environmental impact statement, local cadres, eager to preserve the jobs and tax revenue the plant had brought, overlooked this violation.

But after the factory opened, families living nearby began to notice new and troubling ailments: from vomiting and migraine headaches, to diminished rice yields and dead cattle. They came to believe the factory’s sooty emissions and wastewater dumped into the local water supply, the Xiang River, were the source of these problems. 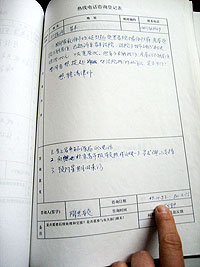 The center’s volunteers record citizens’ stories on sheets like this, collecting information to see if legal action is an option. CHRISTINA LARSON

The villagers first appealed to the factory owner to install more stringent pollution-control equipment. Then they brought their concerns to the local environmental authorities. But by the summer of 2004, little had changed. So the villagers turned to force to shut the factory down — twice storming the grounds to rip its power-supply unit off the wall. Each time, plant operations halted temporarily, while repairs were made, but the factory was back online within a week.

In January 2006, a representative from the village, a farmer named Chen Li Feng, made the long journey to Beijing, where she camped for two weeks in a train station’s waiting room as she struggled to get an audience with the national environmental ministry. However, when that meeting occurred, officials simply gave her a letter directing local authorities to reexamine her case, and little changed. On her next trip to Beijing that November, Chen instead visited the offices of the Centre for Legal Assistance to Pollution Victims. That’s how Xu learned about her case.

Three months later, Xu paid a visit to the factory in Hunan. She photographed factory conditions and interviewed village residents, local officials, and plant workers. She also showed the villagers how to collect samples of wastewater emitted from factory pipes and organized survey teams to record health problems and crop damage in affected areas. In May, she returned to further question the factory owner.

Today Xu is preparing a lawsuit against the local environmental protection bureau, which green-lighted the factory’s faulty environmental impact statement. If successful, the lawsuit will force the factory to shut down until it meets environmental standards. 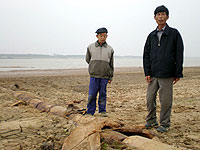 Recognizing that her team can only handle a small number of the tens of thousands of pollution cases like this one across China, Xu’s office has also held an annual training workshop on environmental law for the past six years. So far they have trained about 300 lawyers and 200 judges from across the country.

When I visited the village of Shutangshan, the local organizer Chen told me that she hopes that Xu can finally “make the law work.” We were sitting in her modest home, with the factory’s smokestacks and shriveled orange trees in the backyard visible through the window. She told me that what little she had — her land, her health, her livelihood — was fast slipping away.

The room was dominated by a poster of Mao on one wall, and a loudly ticking clock. This region of southern China has twice nurtured movements of beleaguered peasants who have risen against the central government: first the anti-imperial forces of Sun Yat-Sen, then the peasant armies of Mao Zedong, who was born in a village nearby.

Today Hunan province is a hotbed of environmental unrest. In this, it is not alone. In 2005, China was shaken by 60,000 pollution-triggered “public disturbances” — demonstrations or riots of a hundred or more people protesting the contamination of rivers and farms. The Ministry of Public Security has ranked pollution among the top five threats to China’s peace and stability. The longer the law fails, with China’s business elite prospering while millions of farmers stand to lose everything, the closer the countryside comes to erupting into revolt.