Recently, there has been a groundswell of student activism pressing colleges and universities across the United States to divest their holdings in fossil fuel companies from their investment portfolios. Lively discussions and debates have ensued on campuses regarding the potential wisdom of such divestment of stocks in companies — large and small — that produce coal, petroleum, and natural gas.

It is not for me to recommend what actions other universities’ governing bodies should or should not take. Instead, I will try to explain why I endorse the path taken 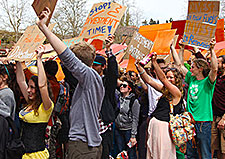 Tufts University trustees voted last month not to divest, despite student protests. JAMES ENNIS/FLICKR
by my own institution, Harvard University.

On October 3, 2013, after many months of assessment, discussion, and debate, Harvard’s president, Drew Faust, issued a long, well-reasoned, and — in my view — ultimately sensible statement on “fossil fuel divestment,” in which she explained why she and Harvard’s governing board did not believe that “university divestment from the fossil fuel industry is warranted or wise.” I urge you to read her statement, and decide for yourself how compelling you find it, and whether and how it may apply to other institutions.

About 10 days later, two leaders of the student movement at Harvard responded to Faust in The Nation, writing in part, “We do not expect divestment to have a financial impact on fossil fuel companies ”¦ Divestment is a moral and political strategy to expose the reckless business model of the fossil fuel industry that puts our world at risk.”

I agree with these students that fossil-fuel divestment by the university would not have financial impacts on the industry, and I also agree with their implication that it would therefore be (potentially) of symbolic value only. However, it is precisely because of this that I believe Faust made the right decision. Let me explain.

If divestment would at best be a symbolic action, without meritorious direct financial impacts, can it nevertheless be important and of great value? More broadly, can’t symbolic actions be valuable?

In specific cases, the answer can be yes. But a major problem is that symbolic actions often substitute for truly effective actions by allowing us to fool ourselves into thinking we are doing something meaningful about a problem when we are not.

But even if there are such opportunity costs of symbolic actions, can they not still be merited as part of moral crusades (as the students would presumably argue)?

Why Universities Must
Divest from Fossil Fuels
New Economy Coalition president
Bob Massie argues that climate change is an urgent moral crisis and that universities must take a strong stand for fossil-fuel divestment.
Read More

Again, the answer, in my view, can sometimes be yes. But climate change is fundamentally a scientific, economic, and political challenge. Viewing it as a moral crusade, I fear, will only play into and exacerbate the terrible political polarization that is already paralyzing Washington.

Furthermore, I believe that divestment of fossil fuel stocks would hurt, not help, efforts to address global climate change. First, natural gas is the crucial transition fuel to address climate change. A major reason for the recent drop in U.S. CO2 emissions is the increased use of natural gas rather than coal to generate electricity, as documented in a recent report from the U.S. Energy Information Administration.

Second, even if divestment were to reduce the financial resources of coal, oil, and gas companies (which it would not do), this would only lead those companies to cut back on research and development of carbon capture and storage (CCS) technologies, as well as other potential technological breakthroughs; it could also reduce the development of some renewable sources of energy, which the fossil fuel companies are pursuing as part of their financially rational diversification strategies.

But where does this leave the role of a university? A few years ago, I met with students at Harvard who were advocating for a reduced “carbon footprint” for the university. I told them a story from my own experience:

When a major oil company asked me to advise it on the design of an internal, voluntary tradable permit system for CO2 emissions, my response to the company was, “Fine, but the emissions from your production processes — largely refineries — are trivial compared with the emissions from the use of your products (combustion of fossil fuels). If you really want to do something meaningful about climate change, the focus should be on the use of your products, not your internal production process.” (My response would have been different had they been a cement producer.) The oil company proceeded with its internal measures, which, as I anticipated, had trivial, if any, impacts on the environment — and they subsequently used the existence of their voluntary program as an argument against government attempts to put in place meaningful climate regulation; they argued that they were already doing their part.

My view of a university’s responsibilities in the environmental realm is similar. Our direct impact on the natural environment — such as CO2 emissions from our heating plants (or holding stock in fossil-fuel companies) — is absolutely trivial compared with the impacts on the environment (including climate change) of our products: knowledge produced through research, informed students produced through teaching, and outreach to the policy world carried out by faculty.

So, I suggested to the students that if they were really concerned with how the university affects climate change, then their greatest attention should be given to priorities and performance in the realms of teaching, research, and outreach.

But why not focus equally on reducing the university’s carbon footprint while also working to increase and improve relevant research, teaching, and outreach? The answer brings up a phrase I mentioned earlier — opportunity cost. Faculty, staff, and students all have limited time; indeed, as in many other professional settings, time is the scarcest of scarce resources. Giving more attention to one issue inevitably means — for some people — giving less time to another.

My bottom line? Try to focus on actions that can make a real difference, such as working through the political world to put in place a meaningful economy-wide carbon price, rather than actions that may feel good or look good but have relatively little real-world impact. That’s particularly important when those feel-good/look-good actions divert us from focusing on actions that would make a significant difference. Climate change is a real and pressing problem. Strong government actions will be required, as well as enlightened political leadership at the national and international levels.

The real contributions of universities to fighting climate change and promoting sound climate policies will be through our products: research, teaching, and outreach. That is how great universities have made a difference on other societal challenges for decades and centuries, and — in my view — it is how they will make a real difference on this one.

Why Universities Must Divest from Fossil Fuels

With our leaders repeatedly failing to take action on climate, divestment from fossil-fuel companies is one of the few effective strategies remaining. Climate change is an urgent moral crisis, and our universities and institutions must take a stand.