There are certain universal truths about any trade. A legal trade in any commodity provides a laundering mechanism for illegal goods. For example, there is a massive trade in black-market tobacco and alcohol, generating millions of dollars for criminals. And with any trade comes the desire to maximize profit and increase demand, which inevitably leads to marketing aimed at stimulating demand and increasing sales. 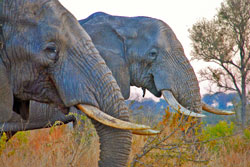 Elephants in South Africa’s Kruger National Park. ARNO MEINTJES/FLICKR
But ivory cannot be grown in plantations or matured in distilleries, when market forces result in increased demand. It can only come from dead elephants.

Advocating a legal trade in ivory as a way to protect elephants in the wild is based on assumptions of political will, best practices, and strict enforcement in a world devoid of corruption and greed. The reality, of course, is far from this vision.

Regardless of whether you favor a trade in ivory or not, it is worth remembering that only four decades ago there was a thriving legal trade in ivory, which was so out of control that African elephants faced extinction.

Efforts at regulating that trade had failed. And because they had failed, in 1989 the international ban on ivory trading was adopted under the UN Convention on International Trade in Endangered Species of Wild Fauna and Flora (CITES), providing a respite for many elephant populations and allowing them to recover. The bottom fell out of the ivory market, trade slumped, and — for just under a decade — the ban was upheld in full.

But in 1999, CITES agreed to allow an “experimental’ sale of stockpiled ivory to Japan. That decision resulted in a general sense that the ban was no longer effectively in place. At a 2002 CITES meeting, China blamed the 1999 decision for confusing people and cited the “experimental” sale as the principal cause of the increasing amount of illegal ivory entering its shores.

Traders themselves agree that no amount of legal trade can satisfy the current demand for ivory.

By 2005, China had decided that it too wanted a piece of the pie and started campaigning for another stockpiled ivory sale in which it would be a recipient. Poaching had begun to increase, along with the number of large-scale seizures of illegal ivory, many of which were destined for China. Against the backdrop of this escalating poaching crisis, CITES agreed another sale in 2008, this time to both China and Japan.

One of the arguments in favor of trade has been that having a regular supply of ivory provides security to the traders, removing the incentive to seek illegal stock. To all intents and purposes, that is what the 2008 sale provided. In fact, the Chinese Government decided to limit the release of its 60-plus tons of ivory to five tons a year until 2016-17. But in March 2013 Chinese delegates to CITES stated that they required 200 tons of ivory a year in order to satisfy the intense demand for ivory products in China.

What is enough? Traders themselves agree that no amount of legal trade can satisfy the current demand for ivory worldwide. And this demand continues to

The Case for a Legal Ivory Trade:
It Could Help Stop the Slaughter
Author John Frederick Walker argues that a partial lifting of the ban on ivory trading would benefit Africa’s elephants by creating a legal trade that would reduce demand for illicit ivory and discourage poaching.
Read More

This would occur at a time when elephant populations across Africa are already facing other threats, especially habitat loss and climate change, and it seems almost inevitable that the number of elephants will decrease as a result of these factors.

The 2008 sale was a major tipping point. Despite a wealth of evidence to the contrary, China persuaded the international community that it had developed a robust registration and control system for ivory that would ensure that no illegal ivory could enter the legal market. The international community also believed that by flooding the market with cheap ivory there would be no incentive for illegal traders to continue operating. The hope was that this would stop the poaching, which was at crisis point in places such as southern Tanzania.

Just because it is difficult to enforce something does not mean the solution is to legalize it.

This could not have been further from the truth. The stockpiled ivory from four countries was sold at auction for an average $160 per kilogram to China and Japan. In China, this legal ivory was sold on to registered traders and dealers for anywhere from $450 to $1,500 per kilogram. Once it reached the registered retail outlets, some of it was sold at around the equivalent of $7,000 per kilogram. In 2010, I personally saw a small polished — not carved — tusk in the Chinese government-owned Friendship store in Guangzhou on sale for $35,000. It carried the appropriate documentation stating its weight as 5.2kg. Several other items in the store were also tagged along equivalent pricing lines.

Illegal ivory trade is low-risk/high-profit, and criminals operate with impunity in most cases. The pro-trade lobby may argue that effective enforcement has been tried as a solution and has failed. But this assumes that wildlife and other related laws are being effectively enforced. Clearly, they are not. Yet just because it is difficult to enforce something does not mean the solution is to legalize it, which only serves to effectively legitimize the criminals. For it will be those same criminals who will engage in the legal trade and seek to increase demand.

How do enforcement authorities distinguish between legal and illegal ivory?

Parallel legal markets present a massive enforcement challenge. The much-heralded ivory control and regulation system in China has been a monumental failure and has finally been acknowledged as such. There is documented evidence of widespread abuse of the legal trade system in China. The government allocation from the legal supply to registered factory owner is limited, so even government-approved traders violate the system. In 2011, one registered Chinese trader was discovered to be using his official licence to launder illegal ivory through the system.

How do enforcement authorities distinguish between legal and illegal ivory? This is a question that proponents of a legal ivory trade fail to answer. Current permitting and regulation systems clearly do not work.

Legal markets also carry a cost. The cost includes administration, processing the registration and control systems, producing the paperwork and permits, and the cost of implementation, enforcement, and prosecution. These costs are factored into the pricing of the product, resulting in higher prices, which are ultimately borne by the consumer.

Bans also come at a cost. But they are more straightforward and unequivocal. If a product is banned, everyone knows that, by definition, if it is on the market it is illegal. The job of the enforcement personnel — police, customs officials, trade regulators, and the judiciary — is immediately simplified.

Sometimes traditions or behaviors we once held dear become unsustainable or detrimental, either to the individual or to the greater good. If we value a future with elephants in the wild, then instead of applying scarce resources to conjuring up unrealistic trading mechanisms to save them, we need to focus efforts and resources on implementing the long-standing commitments to improving protection and enforcement at every level. And perhaps to accept that, in this day and age, the ultimate price of a market in ivory is just too great.

It’s time to translate words into action for enforcement, not for extinction.

The Case for Legal Ivory Trade:
It Could Help Stop the Slaughter

Although most conservationists oppose it, a proposal to allow a partial lifting of the ban on ivory trading would benefit Africa’s elephants. With proper controls and enforcement, a legal trade would choke off demand for illicit ivory and discourage the poaching now decimating the continent’s elephant populations.