Hunched in the back of a pickup truck speeding down an oil road near the western border of Ecuador’s Yasuni National Park, Juan Carlos Acacho — a short, wiry Shuar Indian — says he’s never heard of email or the Internet. But the father of six, who supports his family on a small jungle farm plot, has heard that oil companies want to drill in Yasuni, and that the government has been resisting them — a move he applauds.

“But the oil companies always do what they want,” he said, smiling and shaking his head.

The question facing Ecuador now is: Will the oil industry have its way in Yasuni?

From an airplane, the Yasuni National Park is a sea of jungle green, a 4,000-square-mile rainforest wilderness where the Andes Mountains, the Amazon basin, and the equator meet. Created in 1979, the park overlaps ancestral lands of the Waorani Indians and is inhabited by two groups of natives living in isolation. According to a 2010 study in the journal PLoS One, an average upland hectare in Yasuni contains 655 species of trees (more than the United States and Canada combined) and 100,000 species of insects. One section of the park held at least 200 species of mammals, 247 amphibian and reptile species, and 550 species of birds, making the park one of the most biodiverse places on Earth. 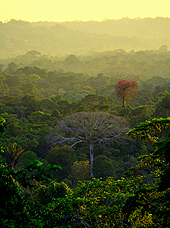 “Yasuni is at the center of the richest zone in the Western Hemisphere,” said Matt Finer, one of the authors of the PLoS One study. “It’s the only area where the diversity of four key groups — amphibians, birds, mammals, and vascular plants — all reach their maximum levels.”

In addition to its remarkable biodiversity, Yasuni sits atop a fortune of oil, making the park an emblem of a development crisis bearing down on the entire western headwaters of the Amazon basin. In addition to oil and gas activity, the region’s forests are being besieged by illegal logging, biofuels agriculture, and an influx of colonists. But the remote northeastern corner of Yasuni near the Peruvian border has attracted the most attention because Ecuador’s largest untapped oil reserves — nearly a billion barrels — lie below it.

In 2007, the Ecuadorian government proposed a way out of the green versus black dilemma: It would forego drilling in the pristine swath of the Amazon in exchange for payments from the international community. For more than two years, the idea seemed to languish. But on Aug. 3, Ecuador and the United Nations Development Program (UNDP) signed an historic trust agreement for managing financial contributions from donors, a hard-won prerequisite for collecting pledges to pay Ecuador for foregoing the revenues it would have received from opening Yasuni to oil drilling.

Many questions remain about whether Ecuador can convince the world to pay it to keep “oil in the soil.” But the August agreement has the potential to become a paradigm for global rainforest conservation programs known as REDD, Reducing Emissions from Deforestation and Forest Degradation.

“Nothing like this has ever been signed before,” said Finer, a biologist with the U.S.-based group Save America’s Forests, who says that any oil drilled in Yasuni would likely be sold on U.S. markets.

Esperanza Martinez, an Ecuadorian activist credited with first envisioning the Yasuni initiative, told Yale Environment 360 that the signing was a “momentous occasion,” adding, “Failure to sign the trust probably would have meant an accelerated invasion of oil in the YasunÃ­.”

Rafael Correa, Ecuador’s president, unveiled the Yasuni initiative three years ago, proposing to forego drilling forever in a region known as ITT — which stands for the oil fields of Ishpingo, Tambococha, and Tiputini — if the international community would pay his country half of what it would otherwise get from drilling: an estimated $3.6 billon over 13 years. Along the way, the UNDP said it would oversee a trust fund for the project in order to calm jittery contributors concerned about future Ecuadorian governments reneging.

A socialist who came to power with the help of the country’s social and environmental justice groups, Correa gained political points when he announced that Ecuador was prepared to take a financial hit in order to save the Amazon and steer trust money to alternative energy, sustainable development, and health projects, as well as to programs to protect two isolated tribes in Yasuni, the Taromenane and Tagaeri.

Observers say that Correa has put himself in a win-win situation. If the plan works, he earns domestic political credibility because of growing support within Ecuador for protecting Yasuni. Internationally, he can burnish Ecuador’s growing green image. “Ecuador genuinely thinks that it can be a green pioneer by showing the rest of the world how one can build an economy while protecting the environment,” said Remi Moncel of the World Resources Institute (WRI). “In fact, as is the case with the Galapagos Islands, Ecuador may benefit from ecotourism, one of the economic benefits of protecting nature and advertising such protective actions to the rest of the world.”

If the plan fails, Correa gets to drill in the ITT while saying that he tried to save it.

The scheme would not only help shift Ecuador’s economy away from oil, it would keep 470 million tons of carbon dioxide in the ground. Now, all eyes are on “the little country with a big plan,” as Ecuadorian officials travel to the United States, Germany, Holland, Belgium, France, Norway, Spain, Italy, the United Arab Emirates, Qatar, Saudi Arabia, Kuwait, Syria, and Lebanon to seek contributions in the coming months. The immediate goal: to raise $100 million in 18 months.

The sprawling Yasuni jungle is made up of moist forests cut by slow, brown rivers; looming trees flanked by buttress roots the size of small cars; giant butterflies; exotic insects; and the ear-popping caws of toucans stirred up by monkeys. Natives who only recently came into contact with the modern world — the Shuar, Waorani, and Kichwa — slip along silent jungle paths with shotguns or bows. Barefoot, they wear western-style clothes as they hunt spider monkeys and rodents in the dense underbrush. Deeper still, hiding in rainforest isolation but increasingly hemmed in by outsiders looking for oil or timber, are the uncontacted Taromenane and Tagaeri, a handful of nomadic family clans living in elongated, windowless huts, ardently rebuffing contact with modernity. 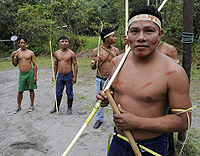 Getty Images
Ecuadorean Waorani natives in Yasuni only recently came into contact with the modern world.

But more and more, the Yasuni is under assault. Several years ago, the Ecuadorian government set out to limit illegal logging and colonization in Yasuni National Park by building a checkpoint on the one-lane ramshackle bridge where the Via Auca oil road crosses the chocolate brown Shiripuno River as it flows through Waorani territory into Yasuni proper. Today, young soldiers can be seen whiling away the hours in a small concrete building listening to soccer matches on the radio and flirting with local girls.

Maria Castro said she knew that the government wanted to keep oil companies out of some places in Yasuni, but that she had never heard of the ITT initiative. “People think the oil companies are the ones that are going to destroy Yasuni,” said Castro, a diminutive Waorani woman in jeans and a bright green halter top. “But it is the loggers and the colonists who do the most damage.” Skeptically, she nodded to the soldiers at the checkpoint. “They say they are stopping them but I don’t believe it.” Castro said that some Waorani natives wanted oil development, but others were frightened of its fallout: pollution, an influx of outsiders, and alcohol problems.

For the bulk of everyday Ecuadorians living in the country’s grindingly impoverished eastern Amazonian lands, the Yasuni-ITT initiative means little. “I know the oil companies fight with the government, but that is it,” said Marco Rodriguez a street vendor in El Coca, a chaotic jungle town in eastern Ecuador where trucks lumber across a bridge over the Napo River carrying illegally harvested timber from Yasuni. “People are too busy trying to live.”

Castro said she doubts the plan will work because the government in Quito, the capital, can’t be trusted to do what it says. “They can’t even stop people from cutting the timber or selling animals from the jungle,” she said. Others agree. Kelly Swing, a researcher at Ecuador’s University of San Francisco in Quito, said that the world lacks confidence in Ecuador, with its history of political instability. “The plan sounds great,” said Swing, “but I think lots of people simply don’t trust that the government will be able to uphold its part of the bargain.”

Others, however, see the UN’s involvement in overseeing the fund as a key to success. And success means achieving three goals, explained Carlos Larrea, a professor at the Andean University Simon Bolivar in Quito and the technical director of the initiative. “We are mitigating global warming, preserving biodiversity in one of the most important hot spots on the planet, and mitigating poverty by creating sustainable employment,” he said.

How would the Yasuni iniatiative work? Contributions to the fund would come from countries, international organizations, businesses, and individuals. Capital investments would be made in renewable energy projects while the interest earned from those projects would underwrite a separate fund dedicated to reforestation and energy efficiency projects, as well as investments in social programs and science and technology. The fund will give contributors Certificates of Guarantee (CGY) ensuring that “the crude stays, in an indefinite manner, below ground.” The CGYs will be returned at full value if the Ecuadorian government ever opens ITT to drilling. The funds generated by the initiatives will be invested throughout Ecuadorian society, though there are no details yet about which organizations would receive the money.

“This plan has the goal of creating a new model by making the country less dependent on revenues from fossil fuels and protecting Ecuador’s most precious natural assets” said Moncel of WRI. “This is a good example of low-carbon development, where economic growth is pursued hand-in-hand with environmental protection.”

Trust payments from the Yasuni initiative are designed to support reforestation and forest preservation programs even outside the boundaries of the park, potentially involving 5 million hectares across Ecuador — nearly 20 percent of the country. Larrea said that the Yasuni model could be a good one for a host of developing countries — such as Peru, Papua New Guinea, and the Republic of Congo — that have high biological diversity and reserves of fossil fuels in environmentally sensitive areas.

Many Ecuadorians are proud that their government is pushing back against global oil companies. Ecuador is home to what may be the world’s largest environmental lawsuit, one pitting 30,000 Cofan natives against Chevron for environmentally injurious practices committed by its predecessor company, Texaco. Said Pamela Martin, a former Fulbright Scholar and political scientist at Coastal Carolina University in South Carolina who has worked in Yasuni since 2006, “Many involved in the Texaco situation have said ‘nunca mas’ [no more] and have supported the Yasuni initiative because of what they’ve learned in their multiple-decade battle with Texaco and Chevron.”