Wild weather is gripping the planet. An El Niño has been wreaking havoc around the world, causing major flooding in South America, droughts in Indonesia and southern Africa, an unprecedented hurricane season in the North Pacific last fall, and much more.

Climatologists are still calculating whether this is the biggest El Niño on record. What they do agree on is that there have now been three “super-El Niños” in the space of just over three decades — in 1982-83, 1997-98, and now 2015-16. This unusual recurrence gives weight to a forecast made by Wenju Cai of Australia’s national science agency, CSIRO, two years ago that headline-grabbing “super El Niños” were in the process of upgrading from once every 20 years to once every ten years. 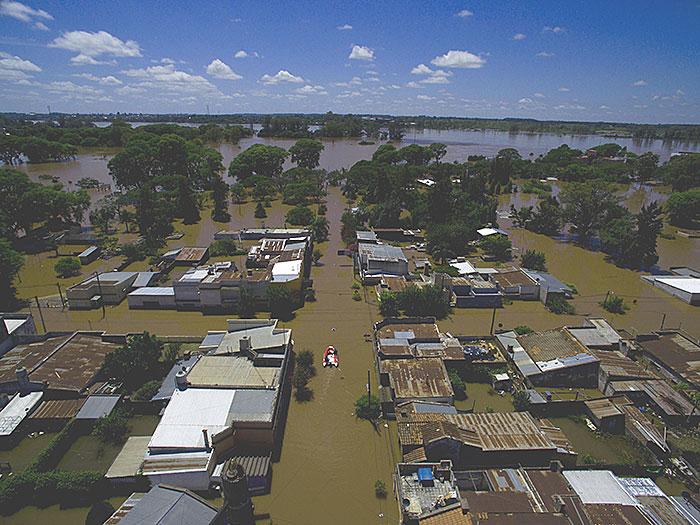 So what is going on? Is global warming beginning to cause more frequent and intense El Niños? And what effect might more powerful El Niño cycles have on the planet’s steadily warming climate?

El Niños are short-term aberrations of ocean currents and weather systems that start in the waters of the tropical Pacific and send shock waves around the world. They usually occur after several years of calm conditions during which prevailing tropical winds blowing across the world’s largest ocean pile warm water up in the west of the Pacific, around Indonesia.

This cannot continue indefinitely. Eventually, there is a breakout. The warm waters turn and wash back east toward the Americas. They take the weather with them, bringing downpours to some normally arid sections of the western coasts of both North and South America, while leaving normally wet Indonesia dry and fire-prone.

Meanwhile knock-on effects from this climatic and oceanic convulsion spread around the world, impacting every continent with floods or droughts, heat waves or cold snaps.

Most models predict the chances of routine El Niños turning into extreme events is growing.

These breakouts, of greater or lesser extent, are a regular feature of the planet. They typically happen every three to six years and last for up to a year. They are often followed by an exaggerated version of normal conditions, known as La Niña, which typically brings heavy rains over Indonesia, floods in southern Africa, tropical cyclones that blast the Chinese coast, hurricanes in the Atlantic, and dry conditions on the Pacific coast of the Americas.

Cai’s study, using 20 climate models from different research institutions that simulate Pacific Ocean conditions with and without climate change, found that this rhythm of normal El Niño cycles is unlikely to change as the world warms. But most of the models predict that the chances of routine El Niños turning into extreme events — super El Niños — is growing strongly, with the likelihood of extremes expected to double.

Cai explains why: Big El Niños happen when the warm waters from the western Pacific push most strongly eastward. And climate change is making that easier, because temperatures in the normally cool waters along the western coasts of North and South America are rising faster than those in other parts of the oceans. So the extra heat from the west can spread further, which loads the dice in favor of major El Niño events.

Not everyone agrees with this conclusion. Skeptics such as Kevin Trenberth at the National Center for Atmospheric Research in Boulder, Colorado, point out that climate models may be good at simulating ocean temperatures, but forecasting what might happen to the El Niño effect is far more difficult. When climate modelers feed ocean temperature data from past El Niños into supercomputers, they are none too good at predicting the occurrence of those prior El Niños.

And even models that predict more big El Niños disagree about where exactly we are headed. Some project that global warming could ultimately drag the world into near permanent El-Niño conditions. But last year an analysis of 12 million years of temperature changes in the Pacific found no evidence of past permanent El Niños, even during times much warmer than today. “Global warming does not drive the Pacific Ocean into a permanent El Niño-like condition,” concluded author Mark Pagani, a Yale University paleoclimatologist.

But Cai, in addition to predicting that the intensity of El Niños could increase, also forecast in a paper last year that La Niñas could grow in intensity, too, with a “near-doubling in the frequency of future extreme La Niña events.”

El Niño is delivering disruptions that could intensify as the world continues to warm.

While climate change appears to make big El Niños more frequent, it is also true that El Niños return the favor by giving a short-term stimulus to atmospheric global warming. This is because the spread of warm waters across the tropical Pacific results in a release of heat energy from the oceans into the atmosphere.

The last big El Niño, in 1998, set global temperature records that lasted for several years. In fact its impact was so marked that in the aftermath of that spike in temperatures, many concluded that global warming had somehow “stalled” because temperatures fell briefly from those heights.

That was wide of the mark, however. The underlying temperature trend continued to carry on up. There have been a series of record global average temperatures since 2005. And when the next big El Niño erupted, it ensured that 2015 became easily the warmest year yet. Many expect there will be enough extra warmth still coursing around the world to deliver a new record in 2016.

But while climatologists are watching global averages, for most people it is the day-to-day weather that matters. And El Niño is certainly delivering some startling events — disruptions that could intensify as the world continues to warm.

The drought it has created in Indonesia has sustained the worst forest and peatland fires there since 1998. Equally dramatic have been floods in Paraguay, Uruguay, Argentina, and southern Brazil that displaced some 150,000 people in December. The current El Niño is also responsible for the big rains and snowfall in California that have at least temporarily eased the drought there. 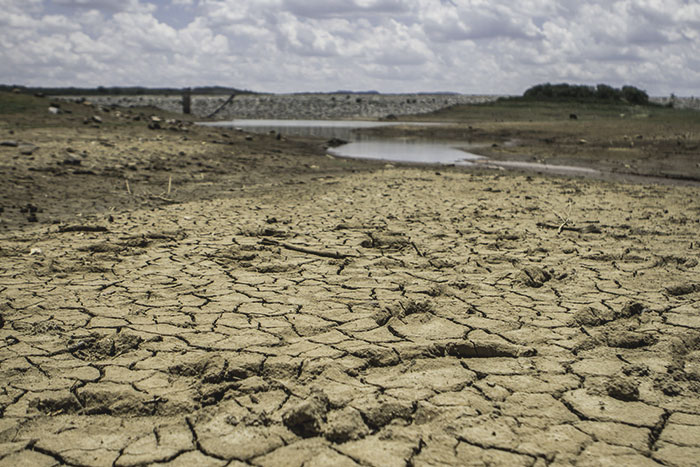 Spreading its influence across the Indian Ocean, El Niño is also responsible for an escalating drought in southern Africa that could result in famine later in the year, scientists say. And it is being blamed for everything from the accelerated melting of tropical glaciers in the Andes in recent months to the bleaching of overheated coral reefs from Florida to Australia’s Great Barrier Reef.

It was also one element behind the unusually warm temperatures in the tropical Atlantic that triggered Hurricane Alex, the first hurricane to form in the North Atlantic in January since 1938, along with East Coast blizzards and record December rainfall and high temperatures on the other side of the Atlantic in the U.K.

Less noticed, there was also an unprecedented hurricane season in the North Pacific in the late fall, stretching into January, when Tropical Storm Pali became the earliest new-year storm ever recorded. Add in a record heat wave in India, bush fires in Australia, and the coldest weather in decades in parts of China, and the disruption around the world in the past three months, when El Niño was at its most intense, has been immense.

Some scientists are even attributing recent disease outbreaks, in part, to the current El Niño. But these claims look less justified. For instance, several new reports have linked El Niño to the growing outbreak of the mosquito-borne disease zika in South America. The suggestion is that it has created the high temperatures and standing water that mosquitoes flourish in.

El Niño has indeed made much of the continent a little warmer than normal. But the Zika outbreak is in northeastern Brazil, some 1,800 miles north of the recently flooded region of the continent. In classic El Niño fashion, northeastern Brazil has been unusually dry in recent months. So, despite claims that the proliferation of water containers set up by people fearing drought might attract the insects, the suggestion appears, on the face of it, to be based on bad geography.

Long-term weather-watchers had been on tenterhooks for an El Niño for a while. There had been several false alarms, says Steve Zebiak of Columbia University’s Earth Institute, one of the first researchers to attempt El Niño forecasts. “In early 2014, we had a definite warming that looked like an onset, but which fizzled out in mid-year,” he says. When identical things happened early in 2015, many predicted another dud. Wrong again. Instead, the warming built and spread.

“I haven’t seen a convincing explanation of why 2015 was different from 2014,” says Zebiak. But his hunch is that the difference may have been the unwinding of another long-term cycle in atmospheric-oceanic interactions in the Pacific, known as the Pacific Decadal Oscillation, which operates on longer timescales than El Niño and is centered in middle latitudes of the Northern Hemisphere.

Whatever the trigger, the current El Niño has been, by some measures at least, a record — bigger than 1982 or 1998. Certainly neither of its rivals exceeded the 3.1 degrees Celsius of warming recorded in the central Pacific in December. But the heat is starting to dissipate now. El Niño may be gone by early summer, its final goodbye heralding a delay in the return of offshore winds that bring the monsoon season to India, meteorologists predict.

What’s next? Nothing is certain. But some smart money is on a big La Niña being underway by late 2016, as the warm waters rush back west. Cai’s studies forecast that in future the greatest risk of extreme La Niñas “occurs in the year following an extreme El Niño, thus projecting more frequent dramatic swings of opposite extremes from one year to the next.”

If it happens, we can expect drought turning to floods in Africa, a resurgence of tropical cyclones, the U.S. Southwest locked back into its long-term drought, and probably much else. Unless you enjoy wild weather, the prognosis from here on out does not look good.