Gregory H. Boyce, the CEO and Chairman of Peabody Energy — the world’s largest private coal company — is facing his share of troubles. President Obama is planning to regulate greenhouse gas emissions from coal plants. The natural gas boom in the U.S. has cut into coal’s traditional dominance of the electric power sector. Public opposition has helped kill scores of proposed coal-fired power plants in the U.S., and the coal industry’s plans to build terminals in the Pacific Northwest to export coal to Asia are in jeopardy. In the U.S. and around the world, growing concerns about climate change are clouding the future of coal.

But to hear Boyce and Peabody tell it, the company is entering a golden age as it positions itself globally to mine and sell an ever-cleaner source of energy that will continue to dominate the world electricity market for decades to come.

ALSO IN THIS SERIES:

Will Global Coal Boom Go Bust
As Climate Concerns Increase?
Some financial experts and environmentalists predict that alarm over global warming may halt the seemingly inevitable rise of the coal industry.
Read more

In April, Boyce told a development summit in Beijing, “As China’s unprecedented urbanization continues, coal provides the holistic path that the nation needs to provide abundant affordable energy that drives social and economic progress while meeting the nation’s environmental goals.”

In a June visit to Australia — where Peabody’s coal mines generate 43 percent of the company’s $8 billion in global revenue — Boyce said that Europe’s and California’s low-carbon policies have had “catastrophic effects,” and he decried Australia’s carbon tax and called for its repeal. Speaking on CNBC in 2011, Boyce touted the booming demand for coal in China and India, saying, “We’re talking about a super-cycle for coal in the globe today, and we think that’s going to be for two, three, four decades.”

That interview came the year after Boyce unveiled the “Peabody Plan to Eliminate Energy Poverty and Inequality,” which sounded the main public relations message being voiced today by the World Coal Association: The key challenge facing the planet is not global warming, but the fact that 3 billion people in the developing world do not have access to electricity. And the only fuel that can reliably and affordably bring electricity to the masses, says Boyce, is coal.

“The greatest crisis we confront in the 21st century is not a future environmental crisis predicted by computer models, but a human crisis today that is fully within our power to solve,” Boyce told the World Energy Congress in Montreal in 2010. “For too long we have been focused on the wrong end of the game. For everyone who has voiced a 2050 greenhouse gas goal, we need 10 people and policy bodies working toward the goal of broad energy access.”

Peabody says the main challenge today is not global warming but lack of access to electricity.

Unapologetic and on the attack, Boyce — a 58-year-old mining engineer with a pay package that totaled $9.5 million in 2012 — heads a company whose roots run 130 years deep in the United States. For much of that time, St. Louis-based Peabody has prospered, especially in recent decades as coal power reliably provided nearly half of U.S. electricity production.

But with the U.S. market becoming more inhospitable, Boyce and his company are increasingly looking overseas to drive growth. In addition to its operations in Australia, which have placed the company in a good position to supply coal to China, Peabody says it is expanding joint ventures with Chinese coal companies and is also enlarging operations in Indonesia, the world’s top coal exporting country. 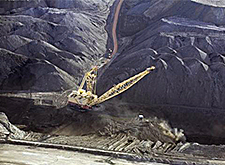 An excavator digs for coal at Peabody Energy’s Caballo Mine in the Powder River Basin of Wyoming. GREENPEACE/TIM AUBRY

Peabody is also exploiting other export markets for its U.S. coal, most of which is acquired at bargain prices from federally owned land in the Powder River Basin in Wyoming and Montana. Peabody ships that coal to South America and Europe through ports on the Gulf of Mexico and the Eastern seaboard. European coal-fired electricity generation rose 18 percent in 2012, and the U.S. had record coal shipments to Europe, thanks in part to Germany’s move away from nuclear power. But with Germany and other European nations gearing up their renewable energy sector, the switch to coal in Europe is expected to be temporary.

In Asia, the “super-cycle” of coal that Boyce has predicted in China and India isn’t looking quite as super as it did a few years ago. China’s economic expansion has slowed from double digits to around 8 percent, and rapidly growing concerns about air pollution in China are forcing the central and local governments there to reduce electricity generation from coal. Beijing has announced that by 2015 it will slash its coal consumption by nearly half, compared with 2010 levels. Kelly Mitchell, a coal campaigner for Greenpeace, noted that China’s most recent five-year plan is calling for a major increase in renewables and a decline in coal-fired electricity.

“While it’s safe to assume that over the next couple of years, absolutely, China is going to be a huge consumer of coal,” said Mitchell, “I think when you look at the longer term trend that may not be the case.”

The major problem that Peabody and other U.S. coal companies face is the largely unforeseen flood of new, cleaner-burning natural gas extracted through hydraulic fracturing of deep shale formations. Historically, coal power has provided 50 percent of U.S. electrical generation, but last year that figure dropped to 37 percent, with natural gas providing 30 percent, according to the U.S. Energy Information Administration (EIA). So far this year, coal has rebounded to provide 40 percent of electricity generation because of rising natural gas prices, and the EIA forecasts that coal could hold on at that level through 2014.

Coal in the U.S. will almost certainly continue to lose ground to natural gas and the growth of renewable energy.

In the long-run, however, analysts say that coal in the U.S. will almost certainly continue to lose ground to natural gas and the steady growth of wind and solar energy. A key element of President Obama’s recently announced climate plan is regulating CO2 emissions from new and existing coal-fired power plants.

Given the many problems it faces, Peabody’s shares on the New York Stock Exchange are down 45 percent this year. Its stock has fallen roughly 80 percent from its peak in 2008. Repeated attempts to elicit a comment from Peabody were unsuccessful.

But to ship that western coal to China at a reasonable price, U.S. companies need coal export terminals in the Pacific Northwest, and opposition to these projects is steadily growing. The coal industry and its allies proposed six terminals in Oregon and Washington. Three of those have been scrapped, and in March Governor John A. Kitzhaber of Oregon and Governor Jay Inslee of Washington wrote a letter to the White House raising concerns about the proposed export terminals. Chief among them is that the terminals would mean a six-fold increase in coal exports from the Powder River Basin, which would commit the U.S. and China to burning planet-warming and heavily polluting coal for decades to come.

U.S. companies need coal export terminals in the Pacific Northwest, and opposition to these project is growing.

“We cannot seriously take the position in international and national policymaking that we are a leader in controlling greenhouse gas emissions without also examining how we will use and price the world’s largest proven coal reserves,” the governors wrote Nancy Sutley, the chair of the President’s Council on Environmental Quality.

Complicating matters for Peabody is that even if export terminals are approved in the Pacific Northwest, it could take up to a decade to clear environmental hurdles and build the facilities. And with China and India hoping to reduce coal use and import less coal, that could dampen long-term demand for U.S. coal. “The international economics of coal, and the supply-demand balance, is by no means a sure thing going out 10, 20, 30 years,” says Ben Collins, a campaigner with the Rainforest Action Network’s Energy and Finance Program.

“Peabody is basically touting all of their reserves in the United States as a moneymaking opportunity,” David Hawkins, director of Climate Programs at the Natural Resources Defense Council, said in an interview. “But to turn it into a moneymaking opportunity they have to get the coal out of the United States and across the ocean, half-way around the world, to markets where there are better positioned competitors.”

The fight over the proposed Northwest terminals has drawn attention to the generous deals that Peabody and other coal companies have been given in the Powder River Basin. According to the U.S. Interior Department’s Inspector General, the federal Bureau of Land Management, which owns the basin’s coal, has been granting coal leases, often without competitive bidding, for as low as $1.11 per ton — many times lower than market prices. An independent study estimated that such practices have deprived U.S. taxpayers of nearly $30 billion in the past 30 years.

‘The international economics of coal is by no means a sure thing going out 10, 20, 30 years,’ says one activist.

Peabody and its allies in the coal, railway, and related industries have created the Alliance for Northwest Jobs and Exports, a public relations and lobbying campaign that argues that building the ports will create thousands of jobs and generate millions of dollars in badly needed revenues for state and local governments. But if the Northwest route to China and Asia is denied to Peabody, the company will have a hard time finding a home for the vast reserves of Powder River coal: Analysts say that the economics of shipping coal from Wyoming to the Midwest, down the Mississippi River, loading it onto freighters, sending it through the Panama Canal, and then crossing the Pacific to Asia don’t make sense.

Jason Hayes, associate director of the American Coal Council, noted that competition from natural gas and federal regulation of CO2 from coal-burning power plants could force the continuing closure of these plants. “Those closures continue to pressure producers and utilities and cost jobs,” Hayes said in an interview.

The surge in global coal consumption, driven largely by China and India, has climate scientists deeply worried, Fen Montaigne writes. But environmentalists and a growing number of financial experts say that alarm over global warming may halt the seemingly inevitable rise of the coal industry.READ MORE

In 2005, Peabody divested itself of harder-to-mine and more costly Appalachian coal when it spun off Patriot Coal as a separate company. Then it bought coal-mining operations in Australia. In 2012 Peabody sold 33 million tons of Australian coal to Asia, a 30 percent increase over 2011. Still, Peabody’s coal reserves remain overwhelmingly in the U.S., with the company sitting on nearly 9 billion tons globally — 3.3 billion tons of which is in the Powder River Basin — compared to reserves of 1.2 billion tons in Australia.

Despite acknowledging a “challenging” market, Peabody CEO Boyce is still gung-ho. He maintains that his Peabody Plan offers a blueprint for coal to continue to provide half of all future power generation worldwide and to bring electricity to billions of people in the developing world. The Peabody Plan calls for the deployment of “supercritical” coal plant technology, which combusts the coal at higher temperatures and pressures and, according to the industry, emits 40 percent less CO2. The plan also calls for the coal industry and utilities to construct 100 major projects worldwide to capture and store carbon from coal-fired power plants.

Peabody and Boyce have not shied away from co-opting the language of the green movement, as the CEO did when he outlined the Peabody Plan in Montreal three years ago. “Coal is the only sustainable fuel with the scale to meet the primary energy needs of the world’s rising populations and economies,” said Boyce.