Yes, the more things change, the more they stay the same. More than a century and a half after Darwin’s On the Origin of Species appeared, nearly half the adults in the United States still don’t believe that evolution happens. And 50 years after the 1962 publication of Silent Spring, naysayers still rage from long-entrenched positions of ignorance at Rachel Carson and her ground-breaking critique of pesticide use.

The parallels with today’s assault on climate science are striking. The personal, vitriolic attacks that were leveled at Carson are echoed today in the organized assault on the scientists who bring us uncontroverted evidence that greenhouse gases are rapidly warming the planet. But Carson savored a victory that today’s climate scientists have yet to taste — her book spurred concrete action to curtail the use of pesticides that were causing widespread harm. 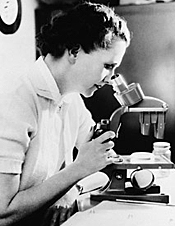 Yale Collection of American Literature/Beinecke Rare Book and Manuscript Library
Rachel Carson was the first female biologist ever hired at the U.S. Bureau of Fisheries.

I came to Carson’s book from a special angle. Several years after her death in 1964, her editor at Houghton Mifflin asked me to bring the history of the book’s publication up to date, and my work appeared in 1970 under the sibilant title, Since Silent Spring. Carson, I knew, was an unlikely target of controversy. She had been a marine biologist employed by what is now the U. S. Fish and Wildlife Service. As the author of several beautifully written and highly acclaimed books about the sea, she was probably the best-known science writer in the world.

But by the late 1950s, Carson had grown uneasy about the poisoning of land and sea by the massive and indiscriminate post-war barrage of new pesticides against gypsy moths, cotton boll weevils, and other pest insects. A very private person, she was reluctant to speak out and, in fact, urged several other persuasive writers, including E. B. White, to take on the task of spreading the bad tidings.

Carson was already suffering from the cancer that would kill her. Yet, with her science background, she stepped in and labored for four years documenting how chemicals were destroying birds, fish, and other wildlife and tracking the mounting evidence of their long-term threats to living things. In style and content, she designed her book to reveal to the public the misuse of those poisons. She pointed out the failures to grasp biological principles that encouraged the spread of deadly chemicals through the open environment and described the resulting fiascoes and disasters. She suggested alternatives and called for intensive research into the effects of these chemicals on all forms of life, including humans.

In June 1962, The New Yorker published the first of three excerpts from her book, and Houghton Mifflin brought out Silent Spring itself in September. She had expected an attack on its content by representatives of the chemical industry and their political allies, but not the kind of virulence and personal animosity that materialized. In almost every case, the attacks were barren of scientific substance.

An official of the Nutrition Foundation contended that “publicists and the author’s adherents among the food faddists, health quacks and special interest groups are promoting her book as if it were scientifically irreproachable and written by a scientist.” Wrote the director of the New

I thought she was a spinster,’ one critic said of Carson. ‘What’s she so worried about genetics for?’

Jersey Department of Agriculture, “In any large scale pest program, we are immediately confronted with the objection of a vociferous, misinformed group of nature-balancing, organic gardening, bird-loving, unreasonable citizenry that has not been convinced of the important place of agricultural chemicals in our economy.” Other literature accused Carson variously of being “a priestess of nature,” “a bird-lover,” and a member of some mystical cult. An official with the Federal Pest Control Review Board drew laughter from his audience when he remarked, “I thought she was a spinster. What’s she so worried about genetics for?”

Such vitriol is much in evidence today as global warming skeptics and deniers ridicule, harass, and even threaten prominent climate scientists like Penn State’s Michael Mann. The scientifically groundless, magical thinking exhibited by Carson’s critics is repeated by the likes of the North Carolina state Senate, which recently passed a coastal management bill that prohibits even considering the possibility of future sea level rise.

As I began work on my follow-up to Carson’s book, I was puzzled at first by the luke-warm response, and sometimes the outright hostility, shown to Silent Spring by some legitimate scientists. I soon realized the practitioners of entomology at the time were largely predetermined defenders of lavish pesticide use. A big step in that process had taken place in the early 1950s, when the American Entomological Society consolidated with the American Association of Economic Entomologists.

Although the enlarged group included many biologists, they felt outnumbered by chemists, toxicologists, and others whose mission was simply to destroy insects. (“These people loathe insects,” a research biologist told me. “Their life is a crusade against them.”) By the time of Silent Spring’s publication, the American Entomological Society listed Velsicol, Monsanto, Shell Chemical Company, and other chemical corporations among their “sustaining associates.” The society’s criticisms of Carson closely paralleled those of their associates in industry.

University biologists themselves became vulnerable to the pressure. Robert L. Rudd, a zoologist at the University of California, was writing a book about the effects of pesticides on the environment at the same time Carson

Carson’s book is a carefully researched argument for what she passionately believed to be the public good.

was writing hers. The two scientists held similar ideas about the dangers posed by unrestrained chemical use. Impeccably scientific in his approach, Rudd nonetheless ran into trouble publishing his book (Pesticides and the Living Landscape). The manuscript went through endless reviews, before finally seeing publication in 1964. But at a price for Rudd: He lost a promotion, and was removed from his position at the California Agricultural Experiment Station.

In researching my book, I wrote to a prominent ecologist I knew at one of the country’s land grant colleges, which are closely associated with the agricultural industry. I asked him to expand on a paper he had published about the harmful effects of long-lasting pesticides on birds. He replied that he was too busy at the time to answer my queries in any detail. When I met him again several years later, he apologized for the brushoff, and sheepishly explained that he hadn’t wanted to jeopardize the position of his co-author (or himself, of course) by directly associating himself with a book about Rachel Carson.

For some scientists, it seems, Silent Spring was a polemic, a diatribe. It did not give both sides of the argument — as a scientist, her critics insisted, she ought to have presented both the pros and cons of extensive pesticide use. But that was just her point. Carson saw no reason to praise pesticide use as it was carried out at the time, for such promotional arguments had appeared for years in a stream of literature from chemical companies and associations, agricultural experiment stations, and the big land grant universities. 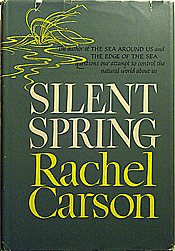 So Carson took up her cudgels. Her book is not a mathematical theorem. It is a carefully researched, precisely reasoned, and elegantly written argument for what she passionately believed to be the public good. It is a product of her social conscience, but not the diatribe that her critics complained about. She did not call for a ban on all pesticides, but mostly for the long-lasting chlorinated hydrocarbons such as DDT whose movement through the environment cannot be contained and whose residues, being fat soluble, are stored in animal tissues and recycled through food chains.

“It is not my contention that chemical insecticides should never be used,” she wrote. “I do contend that we have put poisonous and biologically potent chemicals indiscriminately into the hands of persons largely or wholly ignorant of their potential for harm… I contend, furthermore, that we have allowed these chemicals to be used with little or no advance investigation of their effects on soil, water, wildlife, or man himself.”

Despite a few minor errors in Carson’s work (for instance, that American robins faced extinction from pesticide use), leading biologists found Silent Spring persuasive. In the decade following her death, the U.S. banned DDT and some other chemicals for most uses, on the basis not only of her book but also of much subsequent research. Yet curiously the sniping at her continues today, sometimes with fierce intensity.

An ironic aspect of the assault on Carson’s legacy in recent years has been that it is no longer focused on science. Critics have replaced the old chestnuts attacking her professional competence with a new tack — political correctness. The more hysterical of her opponents, including notable climate change deniers such as the late novelist Michael Crichton, have even branded Carson “a mass murderess,” responsible for the deaths of millions of African children from malaria because her work led to a ban on DDT. They portray a white elite, careless of African lives.

So, as with the global warming debate today, politics trumps science. In the byzantine mindset of right-wing think tanks, concerns about environmental health reflect a godless, anti-business, anti-American mind-set. These critics never mention the fact that DDT was banned in the U. S. and some other countries, but globally is still available; nor that, even when Silent Spring first appeared, DDT’s importance against malaria had been greatly diminished because mosquitoes were evolving resistance to the chemical; nor that alternative pesticides, as well as drugs that attack the malaria parasite and bug nets, are more feasible than using DDT. Ironically, many of Carson’s bitterest critics are creationists, who deny the existence of the same evolution that shapes those insects and makes them pesticide resistant.

Such critics would have felt right at home in 1859, arguing that Darwin’s grandpa may have been an ape, but they themselves never evolved. Yet today’s extremists in universities, state legislatures, and Congress have figured out that bad science can’t win against good science. So whether the issue is pesticides or climate change, they have sought a public relations victory by muddying key scientific issues with character attacks and politics.