Occasionally, while cleaning out files, I’ll come across old screeds and op-eds and newsletters in which I express hope that we are almost there, that wilderness designation for certain of the wildest lands in northwest Montana’s Yaak Valley is imminent.

Known as the Land the Wilderness Act Forgot, the Yaak Valley is the lowest valley in Montana — the confluence of the Yaak and Kootenai rivers is 1,880 feet. It’s also the wettest valley, and from that fecundity, it nurtures the greatest biodiversity in the state.

Relative to other, drier regions of Montana, my home valley of the Yaak

Photo by Randy Beacham
The Yaak Valley is nestled in the Kootenai National Forest, in the northwest corner of Montana.

grows big timber, and for this reason primarily was excluded from earlier Montana wilderness protection bills in the 1960s, 70s, and 80s. Yet the Yaak’s wildness is amplified by its extremely low human population — roughly 150 people live year-round in the half-million-acre upper portion of the valley, and not many more than that in the lower half. In addition, 97 percent of the valley is public land, part of the Kootenai National Forest.

This is the Year of the Yaak, I have been telling people, with regard to the possibility of finally getting some lands here designated and protected as wilderness. I thought we were close in the 1980s — we were, only to have President Reagan veto a bill — and we were close again in the 90s, when Montana Rep. Pat Williams put a bill through the House with 302 votes, only to see it stall in the Senate. And we were close at other times over the last 10 years.

Yet across the decades, traditional opponents of wilderness — snowmobilers, ATV riders, loggers, millworkers, and general anti-government or anti-regulatory zealots — have proved themselves adept at blocking wilderness throughout Montana. In the Yaak, they’ve been successful for 45 years, ever since the Wilderness Act of 1964 was passed by Congress and signed by President Johnson, with the aim of protecting designated areas and keeping them wild. There’s still not a single acre of designated wilderness in the Yaak.

About five years ago, a small community group of which I’m a board member, the Yaak Valley Forest Council (YVFC), began informal, open discussions with those various stakeholders, aimed not so much at telling them what we wanted — wilderness designation for the last roadless lands in the Yaak — but instead asking what they wanted.

The new legislation might provide a template for communities facing other issues in the fractious rural West.

Some couldn’t answer. Some were simply and philosophically against wilderness. Others, however, had specific needs or desires. The ATV riders wanted a loop route — not in the wild backcountry — and snowmobilers wanted to continue riding in the few basins where they were currently allowed to legally ride. The vanishing timber industry wanted jobs in the woods.

We can work with all that, the YVFC agreed. Let’s draw our different user areas on a map and see what the map looks like.

Elsewhere around Montana, other communities were conducting similar exercises. On the Beaverhead-Deerlodge National Forest — where five independent sawmills teeter chronically on the edge of economic collapse in that dry country, as global warming increases tree mortality — another partnership was formed with community members as well as a state wilderness organization, the 7,500-member Montana Wilderness Association. And up in the Seeley Lake and Swan Valley area, where ranchers, environmentalists, and timber workers had been meeting for years to discuss how to defend against residential sprawl and overdevelopment, a similar project emerged simultaneously, one that would add more than 80,000 acres to the Bob Marshall and Mission Mountain Wilderness — the largest federally-protected wilderness area in Montana.

The process has been as inclusionary as it has been informal, with the participants not directed by any agency requirement, but instead by the grassroots flow of democracy. The sole request by the various partners in 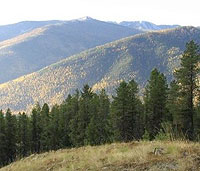 Photo by Rick Bass
While there has been little development in the Yaak Valley, environmentalists say road building and intensive logging have degraded forest habitat.

the meetings is that all participants be committed to finding a solution to the proposals, rather than simply seeking to disrupt or obstruct the discussions. What has emerged, after decades of extreme polarization that left all stakeholders exhausted and brittle, is one unified proposal that combines the three place-based initiatives. The entire Montana delegation — Sens. Max Baucus (D) and Jon Tester (D) as well as the lone congressman, Dennis Rehberg (R) — have been presented with letters from the three communities asking for sponsorship of their proposed legislation, and on July 17, Tester unveiled a draft proposal that combines the three projects.

Named the “Forest Jobs and Recreation Act,” the bill would designate over 700,000 acres of new wilderness — the first in Montana in nearly 30 years, and the first ever in the Yaak. It also creates an assemblage of Recreation Areas, Special Management Areas, and Protection Areas, in which various user groups — including solitude-seekers and snowmobilers — are segregated to avoid conflict. And it directs the Forest Service to perform restoration forestry — a mix of thinning, stewardship logging, prescribed burns, weed treatments, culvert replacements, and road decommissionings — on 7,000 acres per year in the Beaverhead-Deerlodge National Forest, and 3,000 acres per year on the Kootenai National Forest, over the next 10 years.

If Tester’s legislation is successful, it would result in the first wilderness legislation in Montana in 26 years, the longest that any Western state has gone without protecting new wilderness.

“This bill increases wildness and detoxifies — once and for all — the word ‘wilderness.’

Supporters are quick to point out that it is not a traditional wilderness bill, but is instead more of a stimulus and community revitalization proposal. Tester’s bill is small — it pales next to the long-proposed Northern Rockies Ecosystem Protection Act, which would protect approximately 24 million acres of wilderness in five western states (Montana, Idaho, Wyoming, Washington and Oregon). But that legislation has never secured the backing of a single senator from the northern Rockies. Tester’s bill is notable because it might provide a template, as well as motivation, for communities facing other issues — whether social, environmental, or economic — in the fractious rural West.

It’s hard to break the culture of failure in any endeavor. The Three Rivers Challenge — a plan to share stewardship of the Yaak region among logging interests, recreation enthusiasts and environmental advocates — is the proposal best known to me in this legislation. Just because it is championed by ATV riders looking for a legally designated route near communities that already possess roads, as well as by snowmobilers trying to hold on to some of the areas that they have left and millworkers and woods-workers trying desperately to stay employed, doesn’t make it a bad bill. That was the old paradigm of failure. This bill increases wildness, protects endangered species, and detoxifies — once and for all — the word “wilderness.”

It would be a good dramatic story if this bill was a sellout, but it’s not. It’s just a map of common ground — places where longtime opponents have agreed to agree. That’s good for them and for the land, and it’s historic for Montana. Do I mind that here on the leading edge of an ecosystem collapse threatened by global warming there will be some special stewardship logging contracts for local workers in less remote areas? Not in the least. I celebrate it. It doesn’t take a learned scientist to walk around and see that on some sites in these areas there are too many trees per acre for an overheating world.

Some in the far-left environmental movement will oppose Tester’s legislation because it involves chainsaws of any kind. Some in the far right will oppose it because it involves protecting our wildest places — through force of regulation — for future generations. But it is my hope that the vast sweet middle will support it as a politically bold and visionary idea, in these troubled times.