Even as biodiversity seems to be everywhere under threat or in retreat, scientists are discovering and naming new species at a greater rate than anytime during taxonomy’s 250-year history. Some 25 percent of all known amphibian species were discovered only over the last ten years, a period when their numbers worldwide have been in desperate decline. Since 1993 the number of known mammal species has increased 10 percent.

A 2008 study by the Arizona State University International Institute for Species Exploration reported 16,969 new species of plants and animals described in 2006 alone (not including new species of microbial life), which amounts to some 1 percent of Earth’s 1.8 million known species.

While insects accounted for more than half of these newfound species — “We’re finding them at a pace about twice the overall historic average,” says the Arizona Institute’s director, Quentin Wheeler — the total included 2,000 plants and 1,000 vertebrates, among them 185 mammals, 196 reptiles, 108 amphibians, and 37 birds. 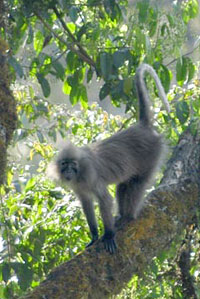 DNA testing found that the “kipunji” in Tanzania is a unique species and required a new genus, the first for a monkey since 1923. WILDLIFE CONSERVATION SOCIETY

The new finds aren’t small cryptic oddities. The recent mammal discoveries range in size from a 3-gram shrew-tenrec to a 100-kilogram antelope. They include a hundred new bat species, a rodent species thought extinct for 11 million years, a pygmy deer from Bhutan, a macaque from the Himalayan foothills, a white titi monkey from Brazil, and a pygmy sloth from Panama. While most of the finds come from the world’s still underexplored tropical forests, discoveries have been made in mountains, deserts, and even in well-surveyed temperate regions.

Many of the new finds result from good old-fashioned fieldwork, especially from expeditions into regions previously inaccessible due to lack of roads or in some cases off limits due to war or politics. Google Earth has given scientists a way to scout terrain and cheaply reconnoiter habitats likely to produce new finds. Taxonomists at work in museums of natural history still find as yet unnamed specimens among the collections of preserved specimens.

Many of the discoveries result from new techniques in molecular genetics. These can show that what scientists thought to be a single widely distributed species is not one species at all, but rather a collection of small populations that look alike but are genetically and evolutionarily distinct. The very common dusky salamander, for instance, long thought to be a single population ranging throughout the U.S. Appalachian and Adirondack Mountains, from New York to Alabama, has now been found to made up of four separate species. While some have suggested that genetic “hair-splitting” has inflated the number of new species, recent studies have shown that “taxonomic inflation” is the exception, not the rule.

The new discoveries are all welcome, says Wheeler, but also worrisome. For as much as they expand our knowledge of the world’s ecosystems, they also reflect “our profound ignorance of many of the most species-rich taxa inhabiting our planet.”

Many more species than previously thought may have been lost without ever having been found.

The rate of discovery, in fact, may be telling us that estimates of the number of species still unknown — ranging from three to ten million to the tens of millions — may be far too low. Discoveries in hot springs or in deep ocean vents, for instance, hint at entirely new and unexplored ecosystems. Extinction rates may therefore also have been underestimated, meaning that many more species than previously thought have been lost without ever having been found.

What especially concerns Wheeler and other researchers is that the taxonomic evidence demonstrates that, unlike human beings that can adapt to life across a wide range of conditions and habitats, most species of plants and animals have evolved to survive only within a narrow range of conditions.

In a February 2009, paper in the Proceedings of the National Academy of Sciences, Gerardo Ceballos and Paul Ehrlich found that 81 percent of mammal species discovered over the last 15 years have just such restricted distributions. A group of lemurs in Madagascar, for example, once thought to be composed of two species, was found, through genetic studies, to be made up of at least 13 species. A golden capuchin monkey, discovered in 2006, survives only in a 200-hectare remnant of forest surrounded by sugar plantations.

A common skipper butterfly species was found to be composed of ten species, each with a distinctive life history. In a place such as Sri Lanka, writes Jörn Köhler of the Department of Zoology at the Hessisches Landesmuseum in Darmstadt, Germany, genetic distinctions could double the number of known amphibian species. “The recognition of new species may exacerbate an organism’s threat status, because it can result in subdivision of a once widespread species into numerous species, each with a smaller and, hence, a more precarious distribution.”

In this “new age of discovery,” as Ceballos and Ehrlich call it, conservationists may have to rethink their paradigms and priorities. If the number and diversity of species is so much greater than previously thought, they suggest that it may be prudent to preserve as many genetically distinct species as possible. Although scientists recognize that there’s species redundancy built into most ecosystems, the problem, write Ehrich and Ceballos, is that “no one is in a position to decide the full conservation value of any species … let alone the other more or less distinct entities now being revealed.”

Counterintuitive as it may sound, Ehrlich told me in an e-mail that “lacking any other information, one would put (conservation) effort into the (species) with a small range.” Such species may be key to the survival of their small ecosystem and their loss, even among many related species, can alter an entire ecosystem.

“Many newly discovered entities may supply previously unrecognized ecosystem services,” write Ceballos and Ehrlich. The effects can be insidious. In the Panamanian tropical forests, for instance, researchers found that where there are fewer rodent species, more of the remaining species carry Hantaviruses known to infect humans.

These concerns become most evident in the Earth’s biodiversity hotspots such as Madagascar, India, Indonesia, South America, and Southeast Asia. Along the Mekong River watershed, for instance, more than a thousand new species have been discovered over the last ten years — an average of two new species each week — and the pace of discovery appears to be unabated. Running 3,000 miles through China, Myanmar, Laos, Thailand, Cambodia, and Vietnam, the Mekong and its surrounding mountains and forests were always known to hold extraordinary reserves of biodiversity, more species per unit area than any river other than the Amazon. The tropical forests of the Annamite Mountains east of the river along the border of Laos and Vietnam were a lost world that had persisted through the last ice age. These were some of the least explored places on earth, made even more inaccessible by political instability and war.

A long-whiskered rodent called the Kha-Nyou was “discovered” lying for sale on a table in a local market.

Michael Hedemark, head of Wildlife Conservation Society’s Laos programs, says that beginning in the 1990s the changed political environment brought about a new generation of national scientists and increased cooperation between national and international science and conservation organizations. Not long after, new species began turning up everywhere, even in local markets where new roads led to increases in wildlife hunting and trade.

The long whiskered rodent called the Kha-Nyou, whose last relations died off some 11 million years ago, was “discovered” lying for sale on a table next to some vegetables by WCS researcher Robert Timmins. It was in a market that Timmins also found a new species of striped Sumatran rabbit.

Also found in the Annamites have been rare, gray and black-striped civets — Owston’s civet and spotted linsang; two new species of deer-like muntjac — the large-antlered muntjac and the dark Annamite muntjac (identified by molecular analysis of found antlers); and a new bat species, the Laos roundleaf bat. New species of amphibians — salamanders and frogs — have also been increasing the tally of new species in Laos.

But peace has also begun exacting a cost on these emergent reserves of biodiversity. Some 320 million people live in countries of the Mekong watershed, and new economic development has engendered unsustainable logging, fishing, and mining. New dams threaten species dependent upon free-flowing streams. New roads enhance illegal hunting. Within a couple of months of discovering a new species of salamander in Laos, the Wildlife Conservation Society found it was commanding high prices in the Japanese pet trade. Forests are being cut to provide land for cash crops such as cacao, coffee, and sugar cane.

One researcher hopes the flood of discovery will inspire a “taxonomic moon-shot,” a worldwide race to find new species.

If biodiversity conservation is difficult enough in good times, Hedemark told me, he worries what hard economic times will mean.

Researchers recognize that their window on new discoveries can close quickly. A single bulldozer or a day’s logging can destroy a species’ entire habitat. Wheeler told me of a researcher who discovered a new species of legume in Madagascar. By the time her finding was published, the species no longer existed.

Wheeler hopes that the flood of new discoveries will restore the reputation of taxonomy, and give new urgency to developments in a science that he says has for too long been considered an arcane exercise in describing species or that had little value in conservation. Maybe, he says, the attention will inspire a “taxonomic moon-shot,” a worldwide race to find new species.

“The fact is that we depend on taxonomy to tell us the role species have in ecosystems,” Wheeler notes. “We’re not going to understand a species’ ecological place without understanding its evolutionary significance. For that we need good baseline information.” Otherwise, he says, echoing Ceballos and Ehrlich, “how do I know whether to save a thousand species or a single unique species?”

For their part, Ceballos and Ehrlich believe the threat to species is so overwhelming that conservation efforts must take precedence over taxonomic studies. “It will at least,” they told me, “provide time to do the taxonomic studies as we go along.“

The tragic irony, says Wheeler, is that in the midst of this taxonomic golden age, “we could lose more species in this century than we’ve found in the last two.”