If you worry about the looming risk posed by climate change, it’s easy to start feeling hopeless. Last month, the UN’s COP-17 climate negotiations in Durban, South Africa, ended with little more than a commitment to keep working toward a new agreement to limit emissions, which might or might not eventually be ratified. In the U.S., at the national level, many politicians won’t even talk about climate change. Many of those who do it claim they’re not convinced — even though the vast majority of climate scientists are — that humans have much if anything to do with it.

As the scientific sense of urgency about climate change has increased, in short, the political will to do anything about it, in the U.S. at least, has mostly vanished. More than 23 years after James Hansen’s dramatic testimony in Senate hearings, which first brought widespread attention to the potential danger of global warming, serious attempts to limit greenhouse-gas emissions have gone pretty much nowhere. Over that same period, humans have pumped tens of billions of tons of additional CO2 into the atmosphere.

For the people who actually have to make government work at the local level, however, despair and hopelessness are luxuries they can’t afford. The sea is already rising. Droughts, heat waves, and other forms of extreme

The plan lays out steps governments must take to make sure infrastructures can withstand the coming changes.

weather are coming more often and with more intensity. Major cities around the world, from Amsterdam to London to Shanghai to Jakarta, have begun active planning for the changes a warmer world will bring. And despite its virtual disappearance from the national conversation in the U.S., things are very different at the local level. New York, Phoenix, San Diego, San Francisco, and other cities have all begun to prepare their own defenses against climate change.

In Southeast Florida, however, the planning is especially comprehensive, and it covers not just individual cities but four entire counties that stretch across more than 200 miles from Key West to Palm Beach and are home to 5.6 million people. With its beachfront cities, flat, low-lying terrain, extensive swampland and exposure to frequent hurricanes, Southeast Florida is at unusual risk for climate-related disaster.

It’s also at the forefront of efforts to stave that disaster off. On Dec. 9, representatives from Monroe, Broward, Miami-Dade, and Palm Beach counties met to approve a far-reaching, bipartisan Climate Action Plan that lays out the steps local governments need to take, working together, to make sure the region’s water supplies, transportation networks, buildings and other infrastructure can withstand the coming changes.

“We recognize each others’ differences,” says Susanne Torriente, Fort Lauderdale’s assistant city manager and the former director of sustainability for Miami-Dade County, “but also recognize that if we work together we can make South Florida more resilient.” 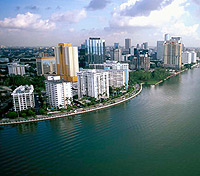 Florida Center for Environment Studies
With its low-lying terrain and beachfront cities, such as Miami, Southeast Florida is at unusual risk for climate-related impacts.
The idea of welding four counties — each with widely varying terrain and populations (most of Monroe County’s area is the nearly uninhabited Everglades and Big Cypress swamps; Miami-Dade, by contrast, includes Miami and Miami Beach) — into the entity called the Southeast Florida Regional Climate Change Compact first arose during a visit to Washington in 2009. “Some of us from several different cities and counties,” says Torriente, “were visiting our congressional delegation to talk about the work we were doing individually on climate change and sea-level rise.” And by “talking,” Torriente means they were looking for federal funding to support individual projects.

During that trip, says Torriente, Broward County Commissioner Kristin Jacobs and several of their colleagues realized that while they all represented cities and counties in Southeast Florida, each was working off different scenarios for how the climate was changing and had different ideas of how to deal with it. “The thought was, ‘Why don’t we come together and pool our resources, time and work, and do our planning regionally?’”

At more or less the same time, Florida Governor Charlie Crist, who had originally embraced the issue of climate change to the point of holding annual statewide summits to wrestle with the issue, decided to run for the Senate. Climate change was then becoming a politically toxic issue, so Crist stopped holding climate summits. The new governor, Rick Scott, “doesn’t even think there is such a thing as climate change,” says James Murley, a land-use attorney and member of the South Florida Regional Planning Council.

As a result of the Washington trip and the change of heart in Tallahassee, the four county commissions — two dominated by Democrats and two by

Rising seas have begun to have an impact on drinking water, as the ocean forces itself into underground aquifers.

Republicans — signed on to what would come to be known as the Southeast Florida Regional Climate Compact. They began holding their own annual summits starting in 2009, working toward the goal of a unified action plan to limit local emissions of greenhouse gases and, because there’s no good reason to believe worldwide emissions will slow down any time soon, to protect themselves against the changes that are already happening.

It didn’t hurt, says Murley, that “we live under constant climate events.” Much of South Florida is crisscrossed with drainage canals, built to turn swampland into solid ground. The canals were built at a time when sea level was lower; now, during particularly high tides, or in the aftermath of heavy rains, the canals can’t drain properly into the ocean. “We get water backing up along the beaches,” he says. “People see that and they ask officials, ‘What’s going on?’”

Rising seas have also begun to have an impact on drinking water, as the salty ocean forces itself into underground aquifers. City planners all along the coast are now laying out plans to retreat from the contamination by drilling new wells further inland. “The point,” says Murley, “is that you can do all sorts of adaptation [to climate change] without using the term” — raising coastal roadbeds, for example, in the name of highway improvement rather than climate adaptation, even though that’s what it really is. The pumps installed by the South Florida Water Management District on some of the region’s canals to handle backups during high tide or torrential rains are another good example.

The plan approved at the recent four-county summit is full of intentional language: words like “develop,” “study,” “identify,” “adopt,” and “evaluate” pepper most of the 100 recommendations it contains. That may sound frustratingly vague in the face of what promises to be a slow-moving but

Ultimately, local officials will likely have to impose restrictions on development in the most vulnerable areas.

inexorable disaster — the phrase “begin immediate construction of a ten-foot sea wall to protect the entire coastline” would feel a little more definitive.

But in fact, while the effects of climate change are generally understood, the specifics — What exactly is likely to happen along this particular ten-mile stretch of coastline? How will Palm Beach’s water supplies fare if sea level goes up another foot, and how different will the situation be in Fort Lauderdale? — are still mostly unknown.

“We have some great academic and agency scientists involved in the compact,” says Murley, “and the work we’ve done collectively has convinced us that global climate models are not fine-tuned enough to tell us what Southeast Florida in particular can expect,” says Murley. “A lot of the work over the next five years,” he says, “will be in downscaling the models.” Another major focus for the near future, he says, will be on resilience — how climate change will affect the built environment. “We’re about six months into a three-year project to understand this,” says Murley.

The really tough going is likely to come after the scientists finally do come to understand the specific threats facing Southeast Florida. Ultimately, county and city officials will likely have to impose restrictions on development in the most vulnerable areas — and that could be a lot riskier politically than improving drainage canals or digging wells.

The Secret of Sea Level Rise:
It Will Vary Greatly By Region

As the world warms, sea levels could easily rise three to six feet this century. But increases will vary widely by region, Michael Lemonick writes, with prevailing winds, ocean currents, and even the gravitational pull of polar ice sheets determining whether some areas will be inundated while others stay dry.
READ MORE
Still, the fact that officials are looking at climate adaptation at the regional rather than the purely local level, and the fact that they’ve already shown they can work together, may allow them to take actions they couldn’t easily take on their own. “The compact enjoys bipartisan support,” says Steve Adams, of the Institute for Sustainable Communities. Adams, a Florida native and a former climate and energy advisor to Governor Crist, attended the recent summit. The final panel, he says, had four elected officials, two from each party. “They referred to each other,” says Adams, “as ‘good Republicans’ and ‘good Democrats.’”

In an era of hyper-partisanship, that’s almost shocking. But it’s also evidence that when people start to see the effects of climate change in their daily lives, political posturing starts to look a lot less important.