At the Detroit Auto Show early this month, I sat down with some Nissan executives who were celebrating the sale of the 10,000th Leaf battery car in the U.S. (and 20,000th worldwide). Behind them on the company’s stand was the eNV200, a plug-in version of one of Nissan’s minivans and one of three new electric cars Nissan will have on the road by 2015. Brendan Jones, a Nissan marketing and sales strategist, told me, “From a Leaf perspective, 2011 was a great year, and very positive for the company.” He said that Nissan’s EV sales had topped those of any other automaker in history.

By traditional auto standards, 10,000 sales of a much-hyped model in a full calendar year are disappointing. The Chevrolet Volt plug-in hybrid, equally celebrated, did slightly worse, with sales of 7,671 in 2011. By contrast, Nissan sold 114,991 Sentras and 268,981 Altimas last year, and Chevrolet sold 204,808 Malibus. 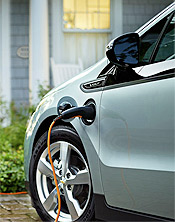 Courtesy of GM
View a gallery of electric vehicles unveiled at the Detroit Auto Show, including the 2012 Chevy Volt, above.
Since the Obama administration offered subsidies to ease the EVs way forward, the early sales performance became the target of political attacks, particularly after a Volt caught fire following a government crash test. (The car was later exonerated by federal regulators.) The Republican Party’s website headlined an article “Failed Promise: Obama’s Million Electric Cars ‘Overly Optimistic.’” Mitt Romney, the son of an auto company president, described the Volt “an idea whose time has not come,” and Rush Limbaugh said bluntly, “Nobody wants to buy any.”

But much of the reporting on the subject, and the attacks, failed to tell the full story. Neither the Volt nor Leaf were available nationwide in 2011, and both were plagued by supply problems. Leaf customers on the East Coast, who put down early deposits, should be getting their cars in the coming months, and Nissan hopes to double production and delivery in 2012. The EV technology is still a novelty for prospective buyers, but the necessary charging networks, though still embryonic, are growing rapidly.

Yet while the big electric car launches of 2011 failed to find as many buyers as hoped, automakers and analysts still see increasing success for electric vehicles in the U.S. and in global markets, including China, which will soon be the world’s largest. The future, they say, lies in new battery technologies that will lower the cost and increase the range of EVs. And tougher mileage standards for U.S. auto fleets, set to kick in over the next decade, will give the cars a big boost.

Felix Kramer, who founded CalCars.org to promote plug-in hybrids, is optimistic. “In spite of press reports of disappointing sales, we don’t hear about unsold cars stuck on dealer lots or buyers’ remorse. We do hear current and prospective owners talking about the features they want in the next cars that come to market.” He points out that Ford, Honda, Toyota, Mitsubishi, BMW, and most other carmakers will be rolling out new EV models over the next two years.

“Early adopter” buyers tend to be vocal boosters — a group of loyal Volt owners sent a letter after the fire controversy broke, headlined, “Why are Chevy Volt Owners Keeping Their Keys?” Paul Scott, a director of Plug In

I think we created too much hype and conversation about EVs and plug-in hybrids,’ an analyst says.

America who doubles as a Leaf salesman in the Los Angeles area, says electric cars are doing great. “Instead of a few hundred EV drivers, we now have almost 20,000. A high percentage of these are vocal advocates of the technology… As long as the external costs of dirty energy are not in the price, we’ll be at a disadvantage, but the gap will close eventually, one way or the other, and EVs will dominate in every way.”

But clearly, there were unreasonable expectations for electric car liftoff. “I think we, particularly the government, created too much hype and conversation about both pure EVs and plug-in hybrids,” David Cole, chairman emeritus of the Center for Automotive Research in Michigan, told me. “The fact is that the economics are not here yet… The problem was that they invested in commercialization before it was ready for prime time. The fact is that just because you want something to happen doesn’t make it happen.”

The U.S. Advanced Battery Consortium has set a cost goal of $250 per kilowatt-hour stored, but many packs today come in at three times that. A $7,500 federal income tax credit (and some state subsidies) helps take the sting out of high prices, but the cars (which currently start at more than $30,000) are still expensive.

Does this mean that EVs are doomed? Not at all, but it does mean that early numbers are likely to be relatively low. Cole is siding with many in Detroit when he says that plug-in hybrid technology (which, as in the Volt,

Some predict that battery pack costs will be cut in half within five years.

combines an electric motor and batteries with a gas engine acting as a generator) “will be the long-term winner” because it solves the “range anxiety” issue presented by battery cars that travel 100 miles on a charge. Even with that advantage, however, GM’s sales goal of 45,000 for the Volt in 2012 may be overly optimistic. “I want some of whatever they’re smoking,” said Eric Evarts, associate autos editor at Consumer Reports.

But cars running solely on batteries will get cheaper and offer increased range. Automakers are pouring billions into battery research, and some predict that pack costs will be cut in half within five years. “All of the manufacturers are working very hard on the technology, as they should, so they are prepared when the economics work to launch product in high volume,” Cole said.

Bob Lutz, who famously dismissed global warming as “a crock of [expletive]” when he was vice chairman of General Motors, nevertheless earned the title “Father of the Chevrolet Volt” for shepherding the car to production. Lutz told me that, by 2025, 20 to 25 percent of new car sales will be hybrid, plug-in hybrid, or battery electric “merely because of government regulations — by 2025, American auto fleets will have to achieve 54.5 mpg.” And he added that European regulations are similarly

One report finds electric vehicles will have a penetration of 26 percent in the global market by 2020.

demanding. “No one knows how to meet these regulations without massive hybridization and electrification,” he said. In the film Revenge of the Electric Car, Lutz says that “the electrification of the automobile is inevitable.”

Aside from government regulation, other factors likely to boost plug-in cars are the quest for energy independence — since electricity, especially when it’s generated from renewable fuels, is domestic — and state efforts, especially in California, to combat global warming and cut local pollution from tailpipes.

Lutz’ predictions are in line with the industry and the analysts who follow it. According to the Boston Consulting Group in a 2010 report, all forms of electrics will have “a likely overall penetration of 26 percent” in the global market by 2020. And that explains why — despite the slow sales — the stands at the Detroit Auto Show, both foreign and domestic, were crowded with electric cars and plug-in hybrids. “For the next 20 years, the internal-combustion engine will be the leading powertrain, but increasingly the electric cars will dominate,” I was told by Peter Marks, then the CEO of major auto supplier Bosch. “My grandchildren will drive electric cars, I’m convinced of it. It’s inevitable that cars will become electric.”

The pace of EV adoption in Europe and China — which has the potential to develop a market far outstripping that of the U.S.— has also been slow in the early days, despite subsidies that in some cases dwarf those in the U.S. John Gartner, an auto analyst with Pike Research, attributes the sluggish sales pace around the world to “a combination of the automakers making the vehicles available later than intended, the twin natural disasters in Japan, and the sluggish global economy.”

According to a survey from JATO Dynamics, by last September only 5,222 EVs were registered in Europe, with Germany (1,020 cars) in the lead,

despite the lowest subsidy ($491) on the continent. Denmark, with very lucrative $26,000 tax credits possible on EVs, registered only 283 of them in the first half of 2011. JATO concluded that perks associated with EVs — such as free city-center parking in Oslo, Norway and access to bus lanes —mattered more than price as a determining factor. In Norway, despite lower subsidies, EV sales were three times those of Denmark.

But price is still a problem for many European buyers, despite the EV’s significantly lower operating costs. Even with a $7,700 government subsidy, the Leaf in Great Britain (where it costs $44,000) is $10,900 more than the very fuel-efficient VW Golf Bluemotion. The Leaf is 10 cents a mile cheaper to run, but it takes a lot of dimes to total $10,900.

Pike Research predicts that China, with the world’s largest auto market, will also have the leading EV market by 2015. China, with 150 automakers, has no less than 55 companies now building electrified vehicles or launching development programs. Some EV builders, such as BYD (with a 10 percent investment by financier Warren Buffett), are also major battery makers. Chinese government subsidies are among the most generous in the world. In five major cities, consumers can tap into $9,474 in rebates (paid to automakers rather than car buyers) for battery electrics and $7,895 for plug-in hybrids. Pike’s Gartner, who calls China’s electric sales so far “disappointing,” also points out that, beginning January 1, all electrified vehicles were exempted from vehicle usage taxes, “which is likely to boost sales there.”

China set a government goal of enabling production of 500,000 electric cars and buses a year by the end of 2011, but its actual rollout is at this point considerably smaller, only a few thousand annually. BYD’s plan to start selling electric cars in the U.S. has stalled. A China Business News count identified only 10 registered electric cars in Shanghai (which has 23 million people) last fall, and 25 in Hangzhou.

Can Electric Cars Take Off? A Roadmap to Find the Answer

Electric cars are finally coming to market in the U.S., but what is the future potential for this much-touted technology? A good way to find out would be to launch demonstration projects in selected U.S. cities to determine if the public will truly embrace plug-in vehicles.READ MORE
But Chinese central planning could dictate that the industry will ramp up quickly. Prime Minister Wen Jiabao has called for a new “road map” for green cars, and the EV effort is heavily supported by China’s state-run electric companies. As the New York Times reported, “With China expected to surpass the United States in the number of all vehicles on the road by as early as 2020, the government-run utilities see it as their job to provide an alternative to imported oil as a way to power several hundred million cars, trucks, and buses.”

China is a sleeping giant when it comes to electric cars, and that’s a pretty good analogy for the rest of the global industry, too. If you judge by the cars on the road today, EVs aren’t impressive — but it’s the potential just around the corner that has gotten automakers and governments excited. Consumers aren’t yet on board in large numbers, but if the cars continue to improve and get cheaper, they will be.