Few living things seem as permanent as the giant sequoia trees of California’s Sierra Nevada. The largest species of flora or fauna on Earth, these towering redwood trees have held sway for millions of years in a narrow band of their native mountain habitat. With heights reaching 300 feet and girths as large as 150 feet, some sequoias can live in excess of 3,000 years before being naturally toppled by a combination of weather and gravity.

Although giant sequoias (Sequoiadendron giganteum) have survived previous eras of climate variability, human-caused climate change has so far not been their nemesis. But U.S. government and university researchers say the long-term existence of these trees could be threatened by the vagaries of a changing Sierra Nevada mountain snowpack and global warming. This combination could make it difficult for giant sequoias, particularly seedlings and young trees, to survive because they would be left with insufficient water to endure longer and warmer summers. 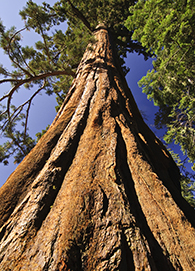 Nate Stephenson, a research ecologist with the U.S. Geological Survey (USGS), based near Sequoia & Kings Canyon National Parks, says that if climate warming continues as projected, tens of thousands of these ancient trees will be at risk in the coming century from destruction by either drought or climate-induced pathogens.

“In 25 years, we would see trouble for sequoia seedlings, then in 50 years trouble for the whole population,” Stephenson said in an interview. “And in 100 years time, we could lose most of the big sequoias.”

The threat that climate change poses to giant sequoias is indicative of a broader danger to tree species worldwide. A study published in December in the journal Science found rising death rates among trees 100 to 300 years old across a wide range of global landscapes, from forests, to savannas, to cities. The study noted that mortality among older trees is linked, at least in part, to higher temperatures and drier conditions. Warmer temperatures have played an important role in forest drought stress and recent tree mortality in the U.S. Southwest, according to a paper published this month in Nature Climate Change.

A 2010 study conducted by 20 researchers worldwide and published in Forest Ecology and Management documented dozens of cases of “significant tree mortality” on every continent (except Antarctica) over the last 40 years — all of which were linked to heat and drought.

According to Craig Allen, a USGS research ecologist based in New Mexico and the Forest Ecology and Management paper’s lead author, tree mortality rates have not only risen in historically arid regions, but also in wet forest environments. “Old trees and ancient forests everywhere are arguably at risk,” says Allen. “If projected temperatures rise by 4 degrees C [7.2 degrees F] by 2100, that warming alone could quite possibly cause most old trees to die sometime this century.”

‘Old trees and ancient forests everywhere are arguably at risk,’ says one scientist.

The potential threat facing giant sequoias demonstrates how a complex interaction of rising temperatures and shifts in snowmelt and precipitation can alter an environment in which tree species have evolved and thrived. Another grave hazard linked to warming temperatures — insect infestations — has not yet affected giant sequoias but has already killed spruce and pine trees across more than 70,000 square miles of western North America.

Mature sequoias depend on deep groundwater from the Sierra Nevada snowpack to get them through California’s extremely dry summers. The trouble is that although annual precipitation doesn’t seem to be diminishing, more of it is arriving in the form of rain rather than snow. That leads to “less snow stored at elevation for springtime melt,” says Randall Osterhuber, a hydrologist at the University of California at Berkeley’s Sierra Nevada snowpack monitoring station. To avoid mid-summer drought, he says, such precipitation should ideally be parceled out in the form of melting snow all summer long.

Stephenson says large sequoias that have well-developed root systems and are tapped into reliable underground water supplies will be able to handle warming for decades. But since their seedlings may be subjected to ever-longer periods of drought, earlier melting of snowpack could mean failure in sequoia regeneration; seedlings have to make it through the first couple of summers while they establish a good root system. 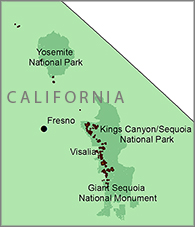 Range of the giant sequoias in California’s Sierra Nevada, with sequoia groves represented by black dots. SAVE THE REDWOODS LEAGUE

The natural range of giant sequoias lies within a narrow 9-mile-wide corridor that stretches 250 miles along the Sierra Nevada. Although the giant sequoia has been planted elsewhere and thrives in Spain, Turkey, Australia, and even parts of New Zealand, it has never been able to naturally reseed itself outside its native range.

The Sierra Nevada has long experienced swings in climate. In fact, up until about 5,000 years ago, sequoias may have been near extinction after being pushed back to meadow edges and along creek corridors, says Scott Anderson, a paleo-ecologist at Northern Arizona University in Flagstaff. During the early Holocene, an epoch of interglacial warming that began some 12,000 years ago, the sequoias moved farther up into the mountain ranges seeking cooler, wetter climes, says Anderson, who has measured fossil pollen records of the sequoias over the last 10,000 years.

“We know the meadows in the early Holocene were pretty dry,” says Anderson. “So, it wasn’t until the late Holocene that there was sufficient winter precipitation to keep water in the meadows for longer periods of time.”

Thus, the sequoias were able to develop into the groves seen today, says Anderson. But the concern among scientists who study giant sequoias is that with Earth warmer than it has been over most of the last 11,300 years, and with temperatures expected to rise significantly this century, changes in climate and precipitation could doom the trees.

Today, the emphasis of much research on giant sequoias and other tree species is shifting toward understanding the effects of climate change and then attempting to mitigate its damage.

Since 2009, the Redwoods and Climate Change Initiative — a joint project of the nonprofit Save the Redwoods League and university researchers — has installed 16 permanent, one-hectare (2.47-acre) research plots in the coastal redwood and giant sequoia ranges.

Todd Dawson, an ecophysiologist at the University of California at Berkeley, whose research lab has been collaborating with the initiative, says the flora in the plots has been inventoried and mapped. Data from these old-growth forest plots will reveal the first above-ground estimates of carbon stored in both coastal redwood and giant sequoia forests, according to Emily Burns, director of science for the Save The Redwoods League. First results are expected in August.

Research on giant sequoias is shifting toward understanding climate change and mitigating damage.

To date, Burns says, no drought-induced mortality has been observed in mature coastal redwoods or giant sequoias. In the worst case long-term scenarios, however, the Save the Redwods League projects that most habitat for coastal redwoods would eventually be rendered unsuitable for the big trees. In the near term, however, coastal redwoods may have an environmental advantage over their inland sequoia cousins since fog condensate provides as much as 45 percent of their annual water needs, says Park Williams, a climate and forest researcher at Los Alamos National Laboratory in New Mexico.

Allen, one of the USGS’s top tree experts, says that warmer and drier conditions across much of the western U.S. over the past 15 years have been causing water stress and mortality in diverse tree populations, from pinyon and ponderosa pine to Engelmann spruce. Although current precipitation deficits in the U.S. Southwest are no worse than during the drought of the 1950s, he says that stress on the trees is greater because temperatures have risen since then by about 1 degree C (1.8 degrees F). Steadily increasing temperatures alone in the U.S. Southwest could kill all the old trees there by mid-century, including the pinyon pine, the ponderosa pine, and Douglas fir, says Allen.

As Allen explained, trees move water through their internal structure via a siphon-like mechanism, driven by water transpiration into the air from pores in their leaves. The drier the soil gets, the more pressure it takes to pull water into rootlets and up through the tree. When that internal pressure gets too great, the numerous narrow water columns inside the tree start to develop bubbles and break apart, at which point the tree itself is endangered.

No major forest type is immune to episodes of drought- and heat-induced mortality.

Warmer temperatures also increase the atmosphere’s evaporative demand for moisture from both plants and the soil, adding to a tree’s internal water stress. While many tree species can conserve water by closing their stomatal pores, this also shuts down photosynthesis and forces trees to draw down their energy reserves, eventually risking death from “starvation” or attacks from insects and disease.

Allen says that globally no major forest type is immune to episodes of drought- and heat-induced mortality, noting it’s happening “from the Amazon to Alberta and everywhere in between.” In parts of both Switzerland and Siberia, for example, Allen says some Scots pine are now experiencing high mortality rates on drier sites.

The details of a forest’s die-off tipping point in the face of climate change remain poorly understood and need more research. But one point beyond dispute is that ecosystems will eventually be forced to reorganize in response to significant climate shifts. In the long run, Allen says, weedier species that reproduce quickly, distribute their seeds widely, and mature quickly are likely to become more common.

Climate Relicts: Seeking Clues On How Some Species Survive

In pockets ranging from mountain peaks to bogs, scientists are discovering plants and animals that survived previous eras of climate change. Now, science writer Carl Zimmer reports, these climate “relicts” could shed light on how some species may hang on in the coming centuries.READ MORE

A study published last year in Nature, and led by plant biologist Brendan Choat at the University of Western Sydney, found that trees at 81 different sites around the world — ranging from very wet to very dry — are more vulnerable to drought than previously thought. Choat and colleagues note that trees fine-tune their physiology, regardless of whether they live in wet or dry environments, to operate very near their drought limits — a strategy evidently driven by competition with other tree species.

“Choat’s findings suggest that trees should be vulnerable to droughts almost everywhere,” says William Laurance, research professor at James Cook University in Australia. “If their findings are broadly correct and local precipitation declines markedly, virtually nowhere will [trees] be safe.”

How can humans help mitigate the effects of such warming temperatures and drier conditions? Allen says that for forests in the western U.S., mechanical thinning and prescribed thinning by fire are good remedies to reduce the number of trees competing for water. Thinning can buy time and make stands more resilient to drought and severe fires.

But with projections indicating that the western U.S. is moving into warmer, drier conditions not seen in hundreds of thousands of years, Anderson warned: “I don’t think the individual sequoias growing today have seen what’s going to come at them in the next 100 years.”