Not long ago, a biologist took Florida landscape architect Jeff Caster aside and suggested that he ought to be designing highway margins not just for safety or scenic value, but as habitat, to help address the nation’s drastic decline in pollinating insects.

Caster passed the idea along to his boss at the Florida State Department of Transportation (DOT), who looked at him as if he were crazy. Even in the best of circumstances, highways are notorious for fragmenting habitat, spreading pollution, causing roadkills, and otherwise disrupting the natural world. Highways are where insects go to be splattered on windshields. “You expect the DOT to do research on bees?” she told him. “Get real.”

Instead, Caster walked her through the reasoning behind the proposal from University of Florida entomologist Jaret C. Daniels: The population of feral honeybees has dropped more than 50 percent nationwide over the past half-century. Pathogens, pesticides, and habitat loss have also decimated native pollinating insect species. But in Florida, agriculture is the second-biggest contributor to the state economy, after tourism, and roughly 100 valuable crops depend on pollinators. Florida DOT not only manages 186,000 acres, about 0.5 percent of Florida’s total area, but its land, says Caster, is “next door to, or one property away from, almost every farm in the state.”

Caster’s bosses all eventually signed onto the proposal, a decision no doubt made easier because the state is now also actively promoting highway wildflower tourism. A $90,000 study to determine how changes in the DOT mowing regimen might benefit roadside pollinator populations is now underway.

In some areas, highway roadsides are really the only places left for species to live.

In most places, the public may still largely want their highway margins “to be either tidy or flowery,” as a roadside biodiversity report for Scottish Natural Heritage put it early this year. They are not looking for Darwin’s “entangled bank.” But in countries around the world, ecologists, and transportation engineers are increasingly joining in an improbable alliance to turn roadsides and other travel conduits into functional habitat.

In France, highway stormwater runoff ponds have become critical amphibian habitat. In the U.S. Midwest, naturalized roadsides have become prairie corridors and nesting grounds. Hawaii has developed an elaborate program to keep invasive plants from spreading along roads. And, in Florida, researchers are now testing a sophisticated new system to alert motorists to black bears and endangered Florida panthers on the Tamiami Trail. 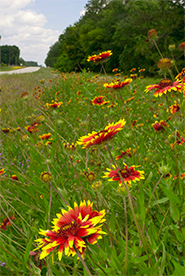 Designing roads with nature in mind isn’t entirely new. Planners of many early highways, like New York’s Bronx River Parkway in 1907, intended them to look like naturalized countryside. But the emphasis was on scenic value. Interest in roadsides as habitat for native plants and wildlife began to develop in the 1980s and 90s, particularly in northern Europe. The British government, for instance, designed a section of roadside along the M40 east of Oxford as a travel corridor for invertebrates between two protected woodlands. By 1994, 25 butterfly species had colonized the corridor, notably including the rare black hairstreak.

But the pioneering roadside experiments undertaken then have now developed into a movement, encouraged in part by landscape ecologist Richard T.T. Forman’s 2002 book Road Ecology: Science and Solutions. There’s now also an International Conference on Ecology and Transportation. (It meets later this month in Scottsdale, Arizona.)

Why the renewed interest in roadside habitat now? It is one way to respond to the loss of both species and natural spaces as the landscape has become more urbanized and as the expansion and intensification of agriculture have eliminated many old pockets of habitat.

The sides of highways are, in some cases, the only place left to live. In northern Europe, for instance, up to 90 percent of the natural ponds and wetlands have disappeared over the past century. But in France, by law, there are stormwater ponds every two kilometers along highways, and by default they have become a partial substitute — though a somewhat problematic one due to roadkill and other factors. When researchers last year surveyed 58 such highway ponds, they found that they had become home for numerous amphibian species, including one that is now rare in nature.

In Iowa, where there’s little left of the original prairie habitat, farmers who used to set land aside under the federal Conservation Reserve Program have instead withdrawn more than 1.5 million acres since 2008 to plant wall-to-wall corn and try to cash in on the market for ethanol. That makes roadsides “the last refuge, the last vestige of hope” for ground-nesting birds like quail, pheasants, meadowlarks, and bobolinks, as well as for many butterflies and other insect species, says Rebecca Kauten, manager of the integrated roadside vegetation management program at the University of Northern Iowa.

An Iowa planner calls roadsides ‘the last refuge, the last vestige of hope’ for ground-nesting birds.

The tripling of herbicide use in agriculture since the introduction of Roundup Ready corn and soybeans has also eliminated milkweed and other native species that used to live in U.S. farm fields. That’s caused monarch butterfly populations to crash, says University of Kansas insect ecologist Orley Taylor, founder of Monarch Watch. One way to partially compensate would be for highway authorities to plant roadsides with milkweed — notably in Alabama, Idaho, Illinois, Texas, West Virginia, and Minnesota, all of which have named monarchs their state butterfly. 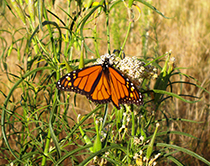 The United States, with about 4 million miles of highways, has generally lagged behind European efforts to naturalize roadsides. Belgium, for instance, now has most of its major highway roadsides planted for conservation, and according to a planner at the Department of Nature, Environment, and Energy, it’s one easy way, and sometimes the only way, to put people back in touch with the natural world. Similar efforts in the U.S. have faltered, partly because there’s no central agency promoting such programs.

The U.S. Federal Highway Administration (FHWA) provides funds to states for roadside enhancement, but that can mean anything from sound barriers to decorative plantings: “Arizona does a pretty good job, with lots of natural grasses and cactus,” said an FHWA spokesman. Iowa has also been a leader in protecting roadside habitat, with a program that times mowing to the natural cycles of ground-nesting birds and other species.

Decisions often get made at the county level, where political patronage often drives the investment in mowers and fuel contracts, according to Monarch Watch’s Taylor. Even though mowing less frequently would simultaneously save tax dollars and benefit the environment, “there’s institutional resistance,” he says. “The guy who runs the highway department wants to defend his fiefdom and keep his little army of mowers.”

A dozen European nations formed a coalition to develop ways to reduce road mortality of species.

The Great Recession has begun to change that mentality by forcing cuts in mowing budgets. Virginia, for instance, found it could save $20 million in 2009 by cutting its roadside mowing in half. But budget pressures also affect programs to develop naturalized roadsides — Minnesota, for example, recently cut $50,000 for its roadside seed-purchasing program.

Resistance may also arise because managing roadsides for biodiversity is much more complicated than managing them for safety. In France, for instance, the same stormwater ponds that now harbor amphibians also typically collect heavy metals, petroleum products, salts, pesticides, and other runoff. That means they may function as a biological sink — a death trap, over the long term — for the very species they attract. Amphibians are 80 percent of the roadkill in some European countries, and heavy traffic has made some populations extinct. Last year, a dozen European nations formed a coalition to develop ways of providing more appropriate freshwater habitat and reducing road mortality.

The idea of attracting wildlife to roads also raises the specter of more accidents for motorists. But in the case of deer, some studies suggest that reduced mowing may actually discourage the animals from using roadsides, because there’s not as much fresh grazing. In Arizona, highway planners choosing native species for roadsides avoid what they call “ice cream species” that might attract elk.

The pressure to make those kinds of nuanced choices will undoubtedly increase, as undeveloped real estate becomes more precious and as new research makes the benefits more apparent. Soybeans, for instance, are a self-pollinating crop. But in Australia and Brazil, studies have recently found that having honeybees nearby increases yields by as much as 50 percent, for reasons that remain open to debate.

At Iowa State University, research by entomologist Matt O’Neal has demonstrated that it’s possible to get the same sort of bump from native pollinators and other beneficial insects living in strips of vegetation just 10 to 50 feet wide. O’Neal’s group has tested a Michigan State University list of tallgrass prairie plants and provided Iowa farmers with a list of a dozen native plant species — like pinnate coneflowers, meadow zisia, and swamp milkweed — that are “best bets” for attracting pollinators.

And where will Iowa farmers plant these precious vegetative strips? The sides of the road may be the only place left.