With the death of climate legislation in the U.S. Congress, Frank Alix’s job has become a lot tougher. Alix is co-founder and CEO of Powerspan, a New Hampshire-based company that says it has developed a technology for snaring carbon dioxide from power plants. Earlier this year, Alix had been optimistic that Congress would pass a climate bill, offering incentives for carbon capture and storage (CCS) and putting a price tag on emitting carbon. That would have caused a dozen utilities to install Powerspan’s equipment, he figured.

“We as a company and as a group of investors bet that the U.S. might provide leadership,” he says.

That didn’t happen under a Congress controlled by Democrats, and now that the Republican Party has taken control of the House of Representatives, it appears to be a virtual impossibility. There’s widespread agreement in Washington that climate legislation is completely off the table until at least the 2012 election, if then. And Alix’s projected market in the U.S. has evaporated. “Without a price on carbon, these projects will cost hundreds of millions of dollars and no one will do them,” he says.

The idea that the demise of climate legislation has crippled the U.S. clean-tech sector is a myth.

Yet this isn’t a simple story of a company or an industry defeated by Washington’s inaction. Alix’s Plan A — a booming U.S. market — may be quashed. But he’s got a Plan B and a Plan C: Europe and China. “There are more opportunities there than you would think,” he says. “We’ll figure it out. I just feel this technology is too important to theindustry and to the world.”

This mix of disappointment and hope is a common refrain among the business supporters of a climate bill. “The lack of legislation is important, but companies are probably not changing the direction they’re headed in,” explains Linda Fisher, chief sustainability officer at Dupont, which sees growing markets for lightweight plastics for cars, solar panel materials, biofuels, and other Dupont products. “We are not pausing on our growth opportunities.”

The opportunities aren’t as great as they would have been with a bill, of course. For utilities, the lack of a sure price on carbon emissions is slowing plans to build big solar arrays and nuclear power plants, and is accelerating a race to natural gas, as some coal plants are being shut due to coming stricter pollution rules.

“We will be making a huge bet on one fuel [natural gas], which is never a good idea,” says Michael Morris, CEO of giant Ohio-based American Electric Power. And the U.S. economy could suffer as hundreds of companies like Powerspan look elsewhere for investment and markets — and as innovation shifts to other countries.

“This is not just about the price on carbon, this is about who will own the industries of the future,” warns Ron Pernick, co-founder and managing director of Clean Edge, a clean-tech research firm.

But the idea that the demise of climate legislation has crippled the U.S. clean-tech industry is a myth. Venture capital investment in clean energy hit a post-financial crisis high in the second quarter of 2010, reports Bloomberg New Energy Finance. And the percentage of all venture capital flowing into clean-tech in the U.S. hit a new record of 12.5 percent, according to Clean Edge.

“I think people have convinced the media that clean-tech is delayed or tied to the price of carbon,” says Jigar Shah, founder of solar pioneer SunEdison and now CEO of the Carbon War Room. “It’s not. I don’t think the pace is changing.”

‘People are bullish, and the lack of a carbon price looks like just another barrier to leap over,’ says one entrepreneur.

Silicon Valley-based ENXSuite, for example, has discovered demand for its energy- and carbon-tracking software has increased since the legislation died. The reason: Companies were holding back because of uncertainty over whether or not the bill would pass, says founder and CTO Michael Meehan. A price on carbon was part of his original business plan, Meehan adds, but carbon is now such a politically charged word in the U.S. that the company changed its business model and even its name — from Carbonnetworks to ENXSuite.

And Fremont, Calif.-based GlassPoint Solar has successfully raised money for a demonstration of its solar steam generators for use in enhanced oil recovery. The company knows that the system must be able to compete with natural gas-generated steam without a price on carbon, says John O’Donnell, GlassPoint’s vice president of business development. “Right now, none of our customers is making investment decisions that include carbon risks,” he says.

How has clean-tech been able to survive, or even thrive? One reason is the faith and passion of individual entrepreneurs, says Shah: “What people don’t understand is that to bet your family’s entire net worth to start a company takes extraordinary optimism. Even after Copenhagen and the climate bill, people are just bullish about their ideas — and something like the lack of a carbon price looks like just another barrier to leap over.” 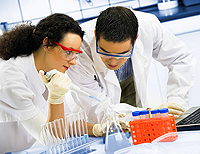 Another reason is that, even without limits on carbon, other polices and market forces are fueling the development and adoption of lower-emitting technologies. A new report from GTM Research predicts, for instance, that the market for technologies to make the electricity grid “smarter” will grow by more than 70 percent, from $5.6 billion in 2010 to $9.6 billion by 2015. The drivers of the move toward a smart grid are savings from efficiency gains and plentiful dollars from the U.S. government, explains GTM Research smart grid analyst David Leeds: “Thankfully, we have enough federal funding over the next five years.”

Or drop in on ALTe in Auburn Hills, Mich., which has been quietly developing a plug-in gas-electric powertrain for shuttle buses, pickup trucks, and other vehicles. The vehicles are propelled by an electric motor, and an on-board gasoline engine kicks in to recharge the batteries after 40 to 50 miles. While the company has already snared its first order, for 3,000 powertrains, it expects major boosts from a U.S. Energy Department loan and from government procurement rules that mandate purchases of a certain percentage of “green” vehicles. It expects to ramp up to 90,000 units a year, providing a key market for the advanced battery factories also springing up in Michigan.

“We would love climate legislation, but we feel we can sell out our factory for years,” says CEO John Thomas, a veteran of Ford, GM, and Tesla Motors.

Federal and state support also underlies plans by Abengoa Solar to build 280-megawatt solar thermal plants in Arizona and California. Effects of the death of the climate bill? Because the company has already signed a power purchase agreement for the electricity from the plants, there are no effects on these projects “except for feeling a little glum about politics,” says Abengoa senior advisor Fred Morse. And the mere fact that the U.S. Environmental Protection Agency (EPA) is requiring carbon emissions to be reported is speeding companies’ efforts to reduce those emissions, says Dupont’s Fisher.

The final reason is that the business world generally believes that limits on carbon, or other policies to promote energy efficiency and renewable power, are inevitable. The EPA is moving ahead with plans to regulate carbon dioxide emissions under the Clean Air Act, for instance.

Executives say that the longer the U.S. dithers, the farther it will fall behind.

“We will also see legislation in the new Congress,” predicts John Cohen, vice president of government affairs at Alstom, a French-based multinational that makes everything from more efficient coal boilers and steam turbines to carbon capture equipment. “It won’t be economy-wide cap and trade, but it will have energy provisions that will continue the inexorable advance to a clean energy economy,” he says. That’s why Alstom is sticking to its long-term strategy of betting on lower-carbon technologies.

But even as companies remain bullish on clean-tech, there’s a powerful sense of regret among environmentally-oriented companies over the additional progress that could have been made if only Washington had passed a climate bill. With a rising price per ton of CO2, far more big solar plants would have begun to be built, says Abengoa’s Morse. “You’d see a shift out of fossil fuel into renewables,” he says.

Dupont’s Fisher argues that what’s really needed is a transformation of the economy, a complete change in how we produce and use energy. EPA regulations might make a dent in carbon emissions, she says, but they won’t stimulate the innovation needed for such a transformation. A price on fossil fuels would. “I reflect on how fast the market started to change when gasoline hit $5 per gallon,” she says.

And executives say that the longer the U.S. dithers, the farther behind it will fall.

“Once again, we are not making the investments today to get ahead of the ultimate game, which is a combination of energy efficiency, renewables and nuclear,” says Ralph Izzo, CEO of New Jersey-based utility PSEG. Absent a price on carbon, PSEG has slowed down its plans for a new nuclear plant, for example, but other nations haven’t. “I think 50 nuclear plants are being built around the world, and only one in the U.S.,” says Izzo. Already, China leads the world in manufacturing solar panels.

So while clean-tech isn’t going to wither away because of inaction in Washington, a huge opportunity to stimulate more innovation and growth is being lost, executives believe. Says Alstom’s Cohen: “Our message is: This is urgent. We need to get on with it now.”