In 2007, Forbes picked Vermont as the greenest state, a choice consistent with conventional thinking about low-impact living. Vermont has an abundance of trees, farms, backyard compost heaps, and environmentally aware citizens, and it has no crowded expressways or big, dirty cities. (The population of Vermont’s largest city, Burlington, is just under 40,000.) Vermont also ranks high in almost all the categories on which Forbes based its analysis, such as the proportion of buildings certified by the U. S. Green Building Council’s increasingly popular eco-rating system, which is called Leadership in Energy and Environmental Design (LEED), and the implementation of public policies that encourage energy efficiency.

But Forbes’s ranking was unfortunate, because Vermont, in many important ways, sets a poor environmental example. Spreading people thinly across the countryside, Vermont-style, may make them look and feel green, but it actually increases the damage they do to the environment while also making that damage harder to see and to address. In the categories that matter the most, Vermont ranks low in comparison with many other American places. It has no truly significant public transit system (other than its school bus routes), and, because its population is so dispersed, it is one of the most heavily automobile-dependent states in the country. A typical Vermonter consumes 545 gallons of gasoline per year — almost a hundred gallons more than the national average.

Is there a better U.S. environmental role model than Vermont? There are many — and the best of them, I believe, is New York City.

The key to New York’s relative environmental benignity is the very thing that makes it appear to be an ecological nightmare: its extreme compactness.

This choice may seem ludicrous to most Americans, including most New Yorkers, because for decades we have been taught to think of crowded cities as one of the principal sources of our worst environmental problems. In the most significant ways, though, New York is a paragon of ecologica responsibility. The average city resident consumes only about a quarter as much gasoline as the average Vermonter — and the average Manhattan resident consumes even less, just 90 gallons a year, a rate that the rest of the country hasn’t matched since the mid-1920s. New Yorkers also consume far less electricity — about 4,700 kilowatt hours per household per year, compared with roughly 7,100 kilowatt hours in Vermont and more than 11,000 kilowatt hours in the United States as a whole. New York City is more populous than all but 11 states; if it were granted statehood, it would rank 51st in per-capita energy use.

The key to New York City’s relative environmental benignity is the very thing that, to most Americans, makes it appear to be an ecological nightmare: its extreme compactness. Moving people and their daily destinations close together reduces their need for automobiles, makes efficient public transit possible, and restores walking as a viable form of transportation. (Dense urban cores are among the few places left in America where people still routinely go around on foot; in the suburbs, you seldom see anyone walking who is actually traveling to a destination rather than merely moving between a building and a vehicle or trying to lose weight.)

Metropolitan New York accounts for almost a third of all the public-transit passenger miles traveled in the United States, and it has, by far, the 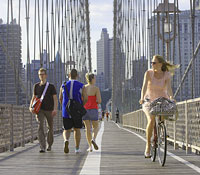 Mario Tama/Getty Images
In New York City, recent improvements to biking infrastructure led to a 35 percent increase in bicycle commuting between 2007 and 2008.

Population density also lowers energy and water use in all categories, constrains family size, limits the consumption of all kinds of goods, reduces ownership of wasteful appliances, decreases the generation of solid waste, and forces most residents to live in some of the world’s most inherently energy-efficient residential structures: apartment buildings. As a result, New Yorkers have the smallest carbon footprints in the United States: 7.1 metric tons of greenhouse gases per person per year, or less than 30 percent of the national average. Manhattanites generate even less.

Americans tend to think of dense cities as despoilers of the natural landscape, but they actually help to preserve it. If you spread all 8.2 million New York City residents across the countryside at the population density of Vermont, you would need a space equal to the land area of the six New England states plus New Jersey, Delaware, Maryland, and Virginia — and then, of course, you’d have to find places to put all the people you were displacing. In a paradoxical way, environmental groups have been a major contributor to residential sprawl, for organizations like the Sierra Club, whose anti-city ethos has been indivisible from its mission since the time of John Muir, have fueled the yearning for fresh air and elbow room which drives not only the preservation of wilderness areas but also the construction of disconnected subdivisions and daily hundred-mile commutes. Preaching the sanctity of open spaces helps to propel development into those very spaces, and the process is self-reinforcing because, as one environmentalist said to me, “Sprawl is created by people escaping sprawl.”

Wild landscapes are less often destroyed by people who despise wild landscapes than by people who love them, or think they do — by people who move to be near them, and then, when others follow, move again. Henry David Thoreau’s cabin near Walden Pond, a mile from his nearest neighbor, set the American pattern for creeping residential development, since anyone seeking to replicate his experience needed to move at least a mile farther along.

At an environmental presentation last year, I sat next to an investment banker who was initially skeptical when I explained that New Yorkers have a significantly lower environmental impact than other Americans. “But that’s just because they’re all crammed together,” he said. Just so. He then disparaged New Yorkers’ energy efficiency as “unconscious,” as though intention were more important than results. But unconscious efficiencies are the most desirable ones, because they require neither enforcement nor a personal commitment to cutting back. New Yorkers’ energy consumption has always been low, no matter what was happening with the price of fossil fuels; their carbon footprint isn’t small because they go around snapping off lights.

I spoke with one energy expert, who, when I asked him to explain why per-capita energy consumption was so much lower in Europe than in the United States, said, “It’s not a secret, and it’s not the result of some miraculous technological breakthrough. It’s because Europeans are more likely to live in dense cities and less likely to own cars.”

In European cities, as in New York, in other words, the most important efficiencies are built-in. And for the same reasons.

New York City looks so different from so much of the rest of the country that its environmental examples aren’t easy to apply — and even New Yorkers tend not to appreciate their power. (No one is more surprised than a Manhattanite to be told that Manhattanites are the nation’s lowest per-capita energy consumers.) But dense urban centers offer one of the few plausible remedies for some of the world’s most discouraging environmental ills, including climate change. Anti-urban naturalists like Thoreau and Muir make poor guides for anyone struggling with the increasingly urgent problem of how to support billions of mobile, acquisitive, hungry human beings without triggering disasters that can’t be contained.