On a recent visit to the Gobi desert, which stretches across China’s western Gansu province, I came upon an unusual sign. In the midst of a dry, sandy expanse stood a large billboard depicting a settlement the government intended to build nearby — white buildings surrounded by lush, green, landscaped lawns, and in the center a vast, gleaming blue reservoir. The illustration’s bright colors were quite unlike the actual surroundings, which consisted of dull sky that faded into a horizon of undulating, parched-brown hillsides.

Still, the billboard’s promise was clear: Through feats of engineering and willpower, specifically the planned construction of a series of aqueducts to bring water from a tributary of China’s Yellow River, the government pledged to build new homes and remake nature. Let there be water. 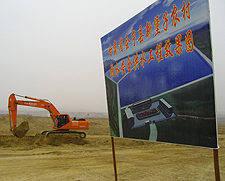 Christina Larson
A billboard in rural Gansu province, depicting the water-rich settlement the government promises to build nearby.

My companion, the young Chinese environmentalist Zhao Zhong, founder of the nonprofit group, Green Camel Bell, was dubious. He pointed out that not only has the water level of the Yellow River been declining in recent years, in some months no longer reaching the Pacific Ocean, but that the river is now an estimated 10 percent sewage by volume. Watering the desert seemed to him, quite literally, a pipe dream.

Yet the sign conjuring an oasis in the desert does point to a very real dilemma: In order to sustain its rapid development, China needs a lot of water. It can only build as many cities as it can supply with clean water. And the country’s water supply is precariously limited: The Middle Kingdom is home to 20 percent of world’s population, but just 7 percent of its available freshwater resources. Rapid urbanization is quickly increasing demand for fresh water, while climate change threatens to further reduce availability.

Wang Rusong, an expert in urban ecosystems at the Chinese Academy of Sciences and an environmental advisor to Beijing’s mayor, told me when I visited his offices in May that China’s most worrisome environmental challenge is not what it has too much of — pollution, sewage, carbon emissions, etc. — but what it doesn’t have enough of: “The limiting factor in Beijing’s development is water,” he said. And Beijing is hardly alone.

World Bank estimates show China has only one-fourth the global average amount of water per capita.

Over the next 20 years, 350 million people in China — more than the population of the United States — are expected to move from the countryside to the cities, requiring an immense infrastructure build-out. (Imagine constructing all America’s cities in one generation.) One measure of the nation’s rapid growth and urbanization is its production of cement — China is by far the world’s largest user of cement, producing seven times more cement than the second-largest user, India. For other natural resources, Beijing is scouring the earth: importing vast quantities of timber from Southeast Asia and Latin America; financing oil rigs in Nigeria, Chad, and Sudan; investing in copper mines in Afghanistan. Yet securing enough fresh water may be the gravest challenge of all, as it is the one resource that cannot be imported.

Instead, China must learn to make do with the water it has. World Bank estimates show that China possesses only one-fourth the global average amount of water per capita. As more and more of its people move to cities, household demands will grow. Professor Wang estimates that Beijing’s water use has grown 150 percent in just the last decade. China’s power sector is extremely water-intensive, and steeply rising energy use is also driving water demand.

A recent study, “Charting Our Water Future,” by the global consultancy, McKinsey and Co., and the Water Resources Group, looks at increasing water demand across sectors (residential, agricultural, industrial) and forecasts that by 2030 China could face a gaping water shortage of 201 billion cubic meters. To make matters worse, much of the available water is located in southern China, while the majority of the population is in the north.

Across China today, one encounters frequent scenes of people struggling to deal with water scarcity. In Gansu province, not far from where the billboard boasts of a modern oasis, local farmers eke out an existence growing vegetables in low greenhouses that they cover with straw mats to retain every last drop of moisture. “There is nothing to spare,” one 40-something farmer told me. Nearby, the wells supplying rural schools have had to be dug deeper in recent years, as groundwater levels sink. In many Gansu villages, canals that run behind homes are dry in the winter months. 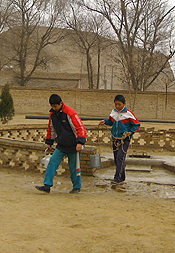 Christina Larson
Children in rural Gansu province collect water from a well on the grounds of their school.

In southwest China, a severe drought this spring affected as many as 18 million people, drying fields and limiting drinking water to residents in large cities. Such water-scarce regions in China have little buffer against even naturally occurring dips in precipitation — a problem that could be exacerbated as the world warms. As Ma Jun, author of the seminal book, China’s Water Crisis, explained: “In some regions, the environmental capacity is very low, and the groundwater is now quite depleted. We have either to change our livelihoods, or make space for natural restoration to happen. We have to recognize that in certain parts of our earth, existence is fragile.”

In northern China and adjacent Mongolia, the sands of the Gobi desert are expanding — a process known as “desertification” — largely due to land-use changes, soil erosion, and perhaps climate shifts. Each spring, seasonal sandstorms strike Beijing; on the worst days, the skies are yellow, and residents are advised to remain inside. In the 1950s, sandstorms hit Beijing only every seven or so years; now they strike each spring.

In western China, the melting glaciers on the Tibetan-Qinghai Plateau have already begun to shrivel streams in Tibet, Qinghai, and Gansu. The Chinese Academy of Social Sciences estimates that the glaciers, the world’s largest outside the poles, are shrinking by about 7 percent each year. Tenzin Dorje, a Tibetan shepherd living in the rugged Qilian mountains, where streams are fed by glaciers, says that each year he must trudge further to find streams where his sheep can drink.

‘We can’t think only about economic development, we have to think about ecological capacity,’ says Wen Bo.

In west China, the Chinese government projects that 150 million people must move from their homes to secure reliable access to water. As Wen Bo, an environmentalist in Beijing, points out: “This is a clear indication that we can’t think only about economic development. We have to think about ecological capacity.” He adds that part of the problem is man-made. “Problematic irrigation policies and dam construction [on the nearby Yangtze River] contributed to the recent drought,” he says. “China is not good at water resources management.”

Indeed, Beijing’s typical mindset is to dig its way out of a hole and fight challenges with massive engineering projects. One example is the plan to move vast quantities of water from the southern Yangtze River to the northern Yellow River through a series of grand aqueducts carved through mountainsides and etched across deserts; the eastern leg of the project has already been built, but subsequent stretches appear, many argue, to be geologically and financially unsound. Yang Yong, an independent Chinese geologist who has studied some of the engineering pitfalls of the current proposals, estimates that there may be better ways to approach the dilemma: “You can get more water through better conservation measures than actually building the South-to-North Water project,” he said.

Indeed, China is starting to emphasize conservation. The city government of Beijing last December announced price hikes of 8 percent on residential water use, one of a series of such increases across the country recently designed to discourage household water waste. As Julian Wong, a senior fellow at the Center for American Progress in Washington, DC, observes: “Natural resource inputs have long been underpriced in China. Conservation measures are going to be a priority in the coming years.”

Currently the greatest culprit of water waste in China is the agricultural sector, which accounts for more than two-thirds of all water use. Yet up to 45 percent of that water disappears before it reaches farmers — evaporating off the surface of open canals, seeping into the dirt walls of poorly constructed rural diversions, or being literally skimmed off the top by any number of unaccounted-for water users, according to research by Christine Boyle, a recent Fulbright fellow at the Chinese Academy of Science’s Center for Chinese Agricultural Policy. She points out that when it comes to water management in China, “there are a lot of moving parts, but not a lot of oversight.”

The reasons for such water waste include poor rural infrastructure (every village or district is responsible for maintaining its irrigation infrastructure, and some have little money for repairs); lack of coordination between governing bodies; and lack of measurements or accountability to tell where, precisely, water is being lost.

Recognizing the problem is the first step to fixing it. As Professor Wang told me in Beijing, “First we have to change people’s minds — then our systems.”