After carbon dioxide, the substance most crucial in determining how climate change will play out over the next century and beyond isn’t a greenhouse gas — it’s the solid state of the molecule H20. Summer melt in the sea ice that covers the Arctic Ocean exposes heat-absorbing seawater to the sun, accelerating global warming in a phenomenon known as Arctic amplification. Summer melting in the land-based ice that covers Greenland is increasingly responsible for the sea-level rise that has already begun to endanger many thousands of miles of coastline. Glaciers moving more rapidly to the sea, in both Greenland and Antarctica, threaten to raise sea level even higher, while disappearing mountain glaciers around the world could choke off water supplies to many hundreds of millions of people.

That being the case, it’s crucial to know exactly what’s happening to the ice as the planet warms up. So it’s easy to understand why the European Space Agency was horrified when its ice-measuring CryoSat satellite failed on launch back in October 2005 — and that the agency was thrilled when CryoSat-2 lifted off successfully this April from the Baikonur Cosmodrome in Kazakhstan. The satellite is now in its shakedown phase, where scientists check out the instruments and solar panels, and it seems to be working perfectly. “There’s no precedent for such a rapid recovery,” says CryoSat Mission Scientist Mark Drinkwater. “We’re up there, collecting great data.”

European Space Agency/Google
In this image, the white circle illustrates the area of Antarctica that satellites prior to the CryoSat-2 could not reach.

It’s not that ice-watchers have been flying blind since 2005. A virtual flotilla of satellites, some dedicated entirely to looking down on the planet’s white places and others only partly devoted to sensing ice, has been whirling overhead for more than three decades. The result has been an unbroken record of observations, starting with NASA’s Nimbus-7 satellite in 1978, showing such key phenomena as the steady, three-decade disappearance of Arctic sea ice. Since the late-1970s, NASA and space agencies from other nations have devised an array of detectors to measure ice from space, using wavelengths spanning the electromagnetic spectrum, from microwaves, to infrared, to visible light.

Just as cell phones, computers, DVD players, and other once-exotic devices have plummeted in price and soared in capability over the years, so have the electronics at the heart of high-flying satellites. The satellites’ vision has in effect become sharper, and the data they return richer in detail. Satellites have even managed to transcend light entirely: the GRACE satellite array now routinely measures changes in local gravity resulting from mass losses in ice sheets.

But each orbiter has a limited lifetime even when it’s working perfectly, and some break down prematurely. NASA’s ICESat — which used lasers to measure the height of ice formations and had already exceeded its expected five-year lifetime — stopped working last October. That’s potentially a huge problem, says Claire Parkinson, of NASA’s Goddard Spaceflight Center, because “we really want a continuous record.” The reason: ice-watchers don’t want to miss any unexpected events, such as the spectacular break-up of Antarctica’s Larsen B Ice shelf in 2002 or the extreme plunge in late-summer Arctic sea ice in 2007. Scientists also want to be sure that observations from different satellites can be calibrated against one another.

Ice watchers don’t want to miss unexpected events, such as the breakup of Antarctica’s Larsen B Ice Shelf.

Each satellite technology has its strengths and weaknesses. To map out the constantly changing extent of ice covering the Arctic Ocean, for example, it would be ideal to take daily photographs, in ordinary, visible light, which provides the sharpest images. But since the Arctic and Antarctic are dark for months at a time, and frequently covered with clouds even when it’s light, Parkinson relies instead on passive microwave detectors. Molecules of H20 vibrate naturally, sending out pings of microwave energy whose wavelengths depend on whether they’re part of a liquid or are crystallized into ice. Satellites that can detect these pings — NASA’s Aqua satellite, for example — are one way climate scientists measure the extent of sea ice. They can even distinguish between ice that has frozen for the first time in a given winter and multi-year ice that has persisted through one or more summers: Older ice is less salty, and emits a subtly different mix of microwaves as a result.

Passive microwave detectors not only see through clouds and darkness. They also take in huge swaths of real estate with each pass, so it’s possible to get a snapshot of the entire Arctic many times a day. One of the most important ice trends picked up by passive microwave technology occurred along the rapidly warming western Antarctic Peninsula. There, oceanographer Sharon Stammerjohn of the University of California, Santa Cruz, used passive microwave satellite data to show that sea ice now blankets the Southern Ocean off the western Antarctic Peninsula three months less a year than it did in 1979.

The tradeoff, says Ron Kwok, at NASA’s Jet Propulsion Laboratory in Pasadena, Calif., is that passive microwaves, while good at discriminating between ice and water, are too diffuse to provide a lot of detail. For that, observers prefer active radar, the same sort the military uses to look for enemy planes or missiles. The satellite shoots a radar beam down at the ground, then snags the beam on the rebound. The detail is fine enough, says Kwok, that “we can resolve cracks in the ice, characterize how the ice is moving.”

In 2007, for example, when Arctic sea ice dipped to its minimum late-summer extent to date, not all of the ice loss came from melting. “About ten percent,” he says, “was blown out by the wind through the gap between Greenland and Svalbard.” Satellite-borne active radar, otherwise known as imaging radar, was able to track that process. 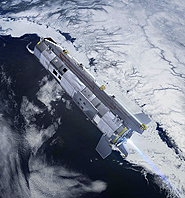 Yet another class of instrument measures changes in ice volume rather than ice extent. The GRACE, or Gravity Recovery And Climate Experiment, was launched in 2002 to measure variations in local gravity around the Earth. The way it works is ingenious: GRACE is actually two identical satellites, orbiting in formation 220 kilometers (137 miles) apart. When they approach an area of excess mass — a mountain range, for example — the extra gravity tugs on the lead satellite, making it speed up a little and increasing the distance between the two. When the satellites approach a mass deficit, such as a crater, the leading satellite slows. By measuring the distance between the two orbiters constantly and precisely, scientists can calculate the Earth’s surprisingly lumpy gravity field with exquisite accuracy.

Mountains and craters don’t move, of course, unless a volcano erupts or a massive earthquake strikes. But ice does, either by sliding downhill as a glacier or by melting. And by flying over places such as Greenland and Antarctica several times each year, GRACE has watched as both places have lost ice around the edges — especially in Greenland, where about 200 cubic kilometers of ice have vanished every year, on average, since 2004. Data collected by GRACE satellites led to the discovery, announced in March, that the melting of Greenland’s massive ice sheet was spreading from the southern part of the country to the northwest coast.

A year ago, the European Space Agency launched its own gravity satellite called the Gravity field and steady-state Ocean Circulation Explorer (GOCE), which is making similar measurements with a different technology. Its planned lifetime is less than two years, so GOCE won’t be able to monitor long-term ice loss. It will, however, map the planet’s permanent gravity field with unprecedented resolution.

The CryoSat-2 can measure not only the changing thickness of land ice but also that of sea ice.

That’s crucial to the operation of yet another type of orbiting instrument known as an altimeter. As the name suggests, an altimeter measures the satellite’s altitude above the surface — if that altitude changes over time due to rising sea level, say, or dwindling ice, a satellite altimeter can track that change down to the millimeter. It works similarly to an active microwave instrument, except that rather than looking at where the ice is and where it isn’t, an altimeter measures the surface’s height, by gauging how long it takes the beam to travel down and back.

NASA’s ICESat, which broke down last fall after six years in orbit, did its altimetry by laser. Before it malfunctioned, its instruments followed up on GRACE’s detection of mass loss in Greenland by measuring a physical thinning of the huge island’s seaward-flowing glaciers, and making similar measurements of retreating glaciers in West Antarctica. As recently as 2007, the Intergovernmental Panel on Climate Change’s Fourth Assessment Report declared that there wasn’t sufficient information available about changes in glacier and ice sheet dynamics to gauge their likely effect on sea level. Now, thanks in part to ICESat, that information is emerging.

The European Space Agency’s CryoSat-2 satellite uses radar rather than lasers, so its beam is less sharp and thus takes in a bigger, fuzzier patch of ice at a time. Like ICESat, CryoSat-2 can measure not only the changing thickness of land ice but also that of sea ice. Thinner first-year ice is easier to melt, so the amount of it relative to the thicker stuff makes a big difference when summer comes. By measuring “freeboard” — that is, the height of the ice above sea — CryoSat-2’s altimeter can differentiate between first-year ice and multi-year ice, because a thicker slab of ice floats higher in the water. That kind of information is important to Arctic ice experts, since a decline in thicker, multi-year sea ice sets the stage for more rapid melting in the future.

CryoSat-2’s projected lifetime is five years; by the time it runs out of steam, NASA is hoping to have ICESat-2 in orbit to replace its own defunct satellite. In the meantime, both agencies will be launching ice-detecting instruments aboard new satellites. And just as next year’s new crop of laptops and cell phones will outshine last year’s, these instruments will be more compact, powerful and feature-laden than their existing counterparts.

“This is a very exciting time for us,” says Drinkwater. “We’ve got six more already approved, so when we want to put the big picture together, we’ll have a lot of tools up there.”