In early 2010, while working in the impoverished rural region of Zamfara in northwestern Nigeria, the group MÃ©decins Sans FrontiÃ¨res — Doctors Without Borders — encountered many young children suffering from fevers, seizures, and convulsions. An unusually high number of very young children, many under age five, were dying, and there were many fresh graves.

The doctors initially suspected malaria, meningitis, or typhoid, all common in the region. But when the sick children didn’t respond to anti-malarial drugs or other antibiotics, one of the physicians began to wonder if local mining activity might be implicated. Historically an agricultural area, Zamfara had been experiencing a small-scale gold rush, thanks to rapidly rising gold prices that encouraged the pursuit of even the most marginal sources of ore. Mining work was taking place in and around the villages and within many of the mud-walled compounds where families were using flour mills to pulverize lead-laden rocks to extract gold.

MÃ©decins Sans FrontiÃ¨res (MSF) doctors sent children’s blood samples for testing and the results revealed acute lead poisoning. Many of the children had blood lead levels dozens, even hundreds, of times higher than

international safety standards. Within a week, an emergency medical and environmental remediation team arrived and began to grapple with an epidemic of childhood lead poisoning that is being called unprecedented in modern times. In the past two years, more than 400 children have died in Zamfara, more than 2,000 have been treated with chelation therapy, and thousands more have been — and continue to be — severely poisoned by exposure to pervasive lead dust.

“We’re losing a whole generation of kids,” said Human Rights Watch researcher Jane Cohen, who was in Zamfara last December and whose group issued a report on the situation last month. The crisis continues despite the extraordinary work to date to treat the most severely affected children and to clean contaminated homes and village sites.

The lead poisoning crisis in Zamfara is unparalleled, but small-scale mining and other industrial activities — including lead-acid battery and electronics recycling — create lead contamination that afflicts children worldwide. Leaded gasoline and lead-paint have been phased out in most countries in recent decades, greatly reducing the extent of childhood lead poisoning, but in many places extensive childhood lead exposure continues. These include mining and smelting operations in La Oroya, Peru, where thousands of children have been exposed to dangerous levels of lead; the lead-zinc mines in Kosovo, whose lead contamination has been called one of Europe’s biggest environmental disasters; lead and zinc mining in Zambia; and smelting and mining waste in China that has exposed children to dangerous lead levels. A 2011 survey of worldwide childhood lead exposure found additional mine-related exposures occurring in Australia, Brazil, India, and Mexico. 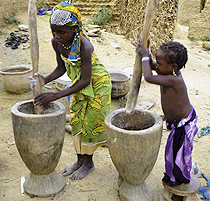 TerraGraphics
Often, the grinding of leaded rock is done with flour mills and with mortars and pestles.
The hazards of artisanal, or small-scale, mining and lead are well-known. But rarely have they coincided with such a disastrous outcome as in Zamfara. Artisanal gold mining — which is often unpermitted or illegal — typically involves manual labor, both in the mines and in extracting ore by breaking and grinding rock. Chemical extraction of gold ore using mercury also poses serious health hazards. Child labor is common in these mines, and very young children can be exposed to mining’s dust and chemical hazards when they accompany parents to work sites. Mercury is typically the primary chemical hazard in artisanal gold mines, but in Zamfara, “the lead poisoning has blown the doors of any mercury poisoning that’s occurring,” said Ivan Gayton, who is head of mission for MSF Nigeria, speaking from Nigeria.

Lead has long been known as a potent neurotoxin that can also damage other body systems. Lead poisoning most commonly occurs through ingestion and inhalation of lead dust and particles. Children, especially young children, are particularly vulnerable for reasons that include their hand-to-mouth activity and developing nervous systems. Exposure to lead can reduce IQ and cause behavioral problems. Acute exposure can result in blindness, certain types of paralysis, seizures, encephalopathy, and death.

As understanding of lead’s impacts on children has grown, the level of exposure considered safe has dropped. In January 2012, a U.S. Centers for Disease and Prevention (CDC) advisory committee recommended lowering what is considered an elevated childhood blood lead level from 10 to 5 micrograms per deciliter, stating that “no measurable level of blood lead is known to be without deleterious effects.” One of the children’s blood samples sent to the CDC from Zamfara in 2010 measured 900 micrograms per deciliter, said Gayton. The CDC termed such high blood-lead levels “unprecedented.”

What’s made the contamination in Zamfara so acute is the grinding of leaded rocks, in which gold is found, using flour mills inside village compounds. Adding to the toxicity is that these rocks contain lead carbonates, a form of lead particularly soluble in stomach acid. These rocks are collected and crushed by hand, typically at the mine sites. But much

Much of the grinding of leaded rocks is done by women inside homes where there are many children.

grinding has been done in the villages and by women inside homes where there are many young children.

The Zamfara village compounds often house several extended families, explained Casey Bartrem, who works for TerraGraphics, the Idaho-based environmental engineering company that has been supervising and carrying out environmental remediation of lead-contamination in Zamfara. A single compound is often home to many children under five, said Bartrem, who most recently traveled to Zamfara in January. The village of Bagega, which is awaiting cleanup, is estimated to have more than 1,500 children under five.

In addition to rock grinding, which is being done with flour mills and with mortars and pestles, children are exposed to lead dust that relatives — including young girls who sell food to miners — bring home from the mines on their clothes and bodies. The compounds’ dirt floors and mud bricks contain leaded soil. Complicating this is that fact that Zamfara is a Muslim community under Sharia law, where women typically stay within family compounds, which is why the rock-grinding has been done at home. In this very poor agricultural region, ore-processing is a way for women to contribute to family income.

“The process creates a very fine powder, like baby powder that is everywhere inside the home,” said Bartrem. Local water sources — including those used for bathing, washing, and fishing — have become contaminated through sluicing of ore-laden sands. Staff members from the CDC have seen children playing on mine waste piles.

Initial surveillance conducted by the international medical team — which included experts from the CDC, the World Health Organization, MÃ©decins Sans FrontiÃ¨res, and the Nigerian Ministry of Health — found that 97

In one Nigerian village, more than 50 percent of the children exposed to high lead levels died.

The team began treating children most at risk of dying — those under five who were exhibiting symptoms of acute lead poisoning. So far about 2,000 children have received chelation therapy, using an oral drug called Succimer. “The treatment is lifesaving,” said Mary Jean Brown, chief of the CDC’s Healthy Homes Lead Poisoning Branch, who worked in Zamfara. “Before therapy, 48 percent of these children were dying. Less than one percent were dying within days of getting the drug.”

An estimated 1,500 more children need urgent treatment, said Gayton, and about 2,000 are still receiving chelation therapy. Because lead accumulates in bone and tissue and is released over time, some children may need treatment for many years. But this therapy cannot be administered if children risk ongoing contamination, as the drug will not work while children are actively exposed to lead, explained Joseph Graziano, Columbia University professor of environmental health sciences, who helped develop Succimer. There are limited in-patient facilities, so much of the treatment occurs while children are living at home. Yet many homes remain contaminated. So for these children, treatment has to await cleanup.

“We’re holding a bandage on the wound and keeping mortality down,” said Gayton.

The principles of cleanup are straightforward, as TerraGraphics CEO Ian von Lindern explained. “Get the leaded dirt out and give the communities a fresh start with fresh dirt,” he said. But the challenges are considerable. During the rainy season that lasts from June through November, road and bridges wash away, making it difficult to bring in equipment. Religious practice has traditionally meant that only women and male family members could enter compounds, although the local emir has made exceptions to facilitate the remediation work. Collaborating with local crews, TerraGraphics has overseen the cleanup of seven villages so far, about half of those needing to be cleaned.

The best way to prevent recontamination is safer mining practices. While the initial response from many in developed countries would be to stop the

With such extreme poverty, ‘you can’t tell anyone to forget the gold and go back to your goats,’ an aid worker says.

mining, experts familiar with what’s happening in Zamfara stressed that trying to shut down the mining and ore-processing would only drive it underground, likely creating an even greater environmental health crisis as mining families would then be reluctant to seek medical help for their children. In an area of such extreme poverty, with few options for generating household income, “you can’t tell anyone to forget the gold and go back to your goats,” said Mary Jean Brown of the CDC.

Playing a key role in alleviating the crisis in Zamfara is the Artisanal Gold Council (AGC), a Canada-based nonprofit working to advance safer mining practices in the world’s small-scale gold mines. In Zamfara, AGC is working to help villagers adopt methods that would suppress dust and move the processing out of homes and to controlled locations, said executive director Kevin Telmer.

Right now the stumbling block is money. Initial funding for medical treatment and environmental remediation has come largely from international organizations outside Nigeria. But the limited geographic scope of the crisis has deterred some international donors, as has Nigeria’s notorious corruption. A host of organizations, including the CDC and World Bank, have drafted a plan to end the lead poisoning epidemic in Zamfara through continued medical treatment and surveillance, environmental remediation, and improving worker health and safety. They are now waiting for the Nigerian federal government to approve a plan that includes local financing and strict accountability for how funds are spent.

With high gold prices fueling a global gold rush, millions of people in the developing world are turning to small-scale gold mining. In many countries, Shefa Siegel writes, miners are putting themselves and those who live nearby at risk by using highly toxic mercury in the refining process.
READ MORE
Meanwhile, the pace of mining is increasing, children await treatment, and homes and villages need decontamination. “There’s a gold rush that’s been expanding at an ever increasing rate since 2007 and it’s really picking up now,” said Gayton. Gold prices have nearly doubled since 2008 and climbed almost 70 percent since 2010. Gayton fears additional environmental health hazards, including from the use of cyanide to separate gold from crushed rock, which could potentially cause what he called “terrifying” harm.

Zamfara desperately needs a comprehensive approach to environmental remediation, medical treatment, and safer mining, said Gayton. “If that’s not in place six months from how,” he said, “I’m going to start crying negligence.”