As natural wonders go, perhaps the most awe-inspiring is the annual migration of 1.2 million wildebeest flowing across East Africa’s vast Serengeti grassland. It would be a tragedy to lose these animals. But we almost did in the mid-20th century when, decimated by disease and poaching, their numbers crashed to 300,000.

The consequences of that collapse were profound. Much of the Serengeti ecosystem remained ungrazed. The accumulating dead and dried grass in turn became fuel for massive wildfires, which annually burned up to 80 percent of the area, making the Serengeti an important regional source of carbon dioxide emissions. 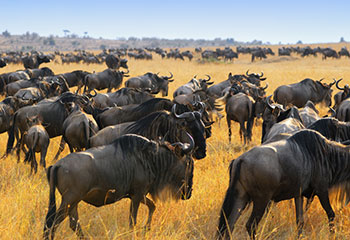 Then, conservation programs to eradicate disease and crack down on poaching led to the recovery of the wildebeest, restoring the grazing system and reversing the extent of the large-scale wildfires. Grazing now causes much of the carbon in grass to be released as animal dung, which is in turn incorporated by insects into soil reservoirs that are not prone to burning. The Serengeti ecosystem has now reverted to a carbon dioxide sink so large that it is estimated to offset all of East Africa’s current annual fossil fuel carbon emissions.

The wildebeest decline and recovery taught a valuable lesson, not only in how easy it is to loose an iconic animal species, but, more importantly, how the loss of a single species can have far-reaching ramifications for ecosystems — and the climate. Mounting evidence from ecological science is showing that one or a few animal species can help determine the amount of carbon that is exchanged between ecosystems and the atmosphere. It’s not that any single animal species by itself has a huge direct effect on the carbon budget. Rather, as the wildebeest case shows, by being an integral part of a larger food chain the species may trigger knock-on effects that grow through the chain to drive significant amounts of carbon into long-term storage on land or in the ocean.

Recent studies have shown, for example that the loss of important predators — from wolves in boreal forests to sharks in seagrass meadows — can lead to growing populations of terrestrial and marine herbivores, whose widespread grazing reduces the ability of ecosystems to absorb carbon. Still, the impact of biodiversity loss on the climate system is underappreciated, and reversing that loss is rarely considered as an effective tool to help slow the buildup of atmospheric carbon dioxide.

A changing mindset sees animal species as important drivers of the climate ship.

Instead, the conversation often turns to the technological fixes known broadly as climate geoengineering. These schemes range from spraying sulfate aerosols into the atmosphere to reflect more solar energy back into space, to fertilizing the ocean with pulverized iron to stimulate blooms of phytoplankton that take up carbon during photosynthesis and carry it to the ocean floor when they die. Sold with slogans like “give me a tanker ship full of iron and I’ll give you the next ice age,” these claims breed angst rather than action. But if in our ignorance we have already messed up the climate system by using technology, who would risk messing it up again with other technologies?

Hence the appeal of what might be called “natural geoengineering.” Natural ecological processes already offer many reliable and safe ways to remove CO2 from the atmosphere. Currently, natural processes — such as photosynthesis by tropical trees and marine phytoplankton, and CO2 absorption by ocean waters — remove and store more than half of the carbon emissions generated by human activities. With thoughtful environmental stewardship there is the promise of doing more, and doing it in more environmentally friendly ways.

However, doing more requires a sea change in mindset. It entails conflating the climate issue with another environmental issue of global proportions — biodiversity conservation. Climate change is commonly viewed as causing collateral damage to biodiversity. Species, especially animals, are viewed as unwitting victims, passengers stuck on a ship that is headed on an ill-fated voyage. A changing mindset sees animal species as important drivers of the climate ship, so biodiversity management and conservation may be a key to fixing the climate change problem.

As always, the devil will be in the details, given that animal effects on carbon exchange may differ from ecosystem to ecosystem. But much headway can be made if species conservation moves beyond simply protecting species for their iconic or charismatic value and protecting them instead for the roles they play in ecosystems and the climate system. Doing this convincingly requires appreciating and knowing how these species fit into food chains, and how their loss can interfere with the ability of natural systems to sequester carbon. 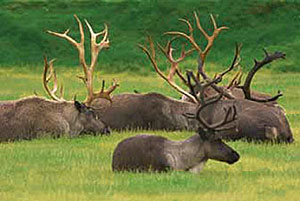 Eliminating large carnivores leads to an overabundance of their prey species like caribou. SARA

Take for instance the vast boreal forest region of northern Canada and Russia, which covers more than 10 percent of the earth’s land area. Boreal trees take carbon dioxide back from the atmosphere to produce stems and leaves and roots. But most of the carbon is not stored within living plant parts. Instead, it enters long-term storage in the soil as dead leaves, branches, and roots that are shed from the plants. The cool boreal soil conditions strongly limit soil microbes from breaking down organic matter and respiring it back to the atmosphere as carbon dioxide. As a result, boreal forests are able to store more carbon than most other places on earth — twice as much as tropical forests. Estimates suggest that Canada’s boreal forests remove and store enough atmospheric carbon dioxide to offset all of that nation’s annual CO2 emissions from fossil fuel burning. In the global carbon budget, this is not a trivial amount, as Canada is among the top 10 emitters of carbon dioxide.

This massive storage of CO2 is the result, in part, of intact food chains comprised of large carnivores like black bears and wolves, and herbivore prey like moose and woodland caribou that feed on trees. But this key benefit is overlooked by wildlife management agencies that are systematically culling bears and wolves out of concern that they threaten moose and caribou populations. Once released from predation pressure, moose populations can increase and over-browse growing trees. Estimates show that even a small rise in moose density from 0.5 to 1.5 animals per square kilometer, which is at the lower end of recorded moose densities for boreal forests, is sufficient to reduce soil carbon storage per unit area by 10 to 25 percent. Moreover, forest thinning by herbivores allows the soil to warm, creating the risk that enhanced microbial activity will cause boreal forests to become a net carbon source rather than a sink.

Developing natural geoengineering solutions requires research into the most promising and effective options.

To keep pace with scientific advances, wildlife management officials and conservationists need to weigh the supposed benefits of eliminating threats by wolves or other carnivores against the impacts of increasing the abundance of their prey species. Until this happens, populations of large carnivores will continue to be disproportionately lost from many ecosystems due to habitat loss and extirpation arising from perceived conflicts with human values and livelihoods. Whether it is sharks, tigers, or dingoes, the absence of top predators can leave herbivore populations unchecked, with the attendant potential loss in carbon storage.

But there is hope and opportunity to reverse the decline of top predators and restore their populations. The clearest example is the story of the sea otter. After being hunted to the brink of extinction during the fur trade, legal protection and management efforts have helped sea otter populations to grow and rebuild coastal kelp forests by regulating herbivorous sea urchins that devastated these forests. Recovering sea otters to historic levels even just along the thin stretch of coastline from Vancouver Island to the western edge of the Aleutian Islands has created the potential to absorb and store 6 to 10 percent of the annual carbon released from fossil fuel emissions in British Columbia, according to a study published in the journal Ecosystems.

More broadly, coastal ocean ecosystems offer some of the greatest opportunities for carbon storage. Salt marshes, seagrass meadows, mangroves, and continental shelves are some of the world’s most important carbon sinks. Often regulated by predator driven knock-on effects, these marine sinks can store carbon up to 40 times faster than tropical forests. But, overfishing of predatory fish and crabs in places like the saltmarshes of Cape Cod, Massachusetts has resulted in an explosion of herbivore crabs and snails, with large swaths of marsh dying off and subsequent erosion of tide-exposed sediments. Along with this comes the loss of hundreds of years of stored carbon, as well as the loss of future CO2-absorption potential.

On continental shelves, fish and invertebrates such as starfish and sea cucumbers, precipitate carbonate minerals in their intestines as a byproduct of physiological processes to prevent excess calcium assimilation into their bodies. Globally, this annual carbonate production and release to the ocean floor as waste is estimated to equal the annual fossil fuel carbon emissions by such countries as Brazil, the UK, or Australia. But marine fisheries globally have cut down this carbonate production potential. It is perhaps time to rethink marine fisheries management by setting quotas based on weighing the societal benefits of seafood harvests against the societal costs of lost carbon-storage potential.

There are many more examples of animal-driven effects that hold the promise of increasing carbon storage across many different species and ecosystems. The potential magnitudes of these effects are on the same order as conventional land management activities, such as reforestation or planting new forests — policies that are increasingly being promoted as environmentally friendly alternatives to technological geoengineering. Humans already manage populations of many animals for other purposes, so expanding consideration to carbon dynamics, while representing a shift in management goals, would not involve a radical shift in management approach.

Developing natural geo-engineering solutions requires research into how to make the most promising options effective and cost-efficient. The rub is that individual animal species tend to occur regionally, not globally. This means that we need to shy away from trying to find the single, global-scale, home run, geo-engineering solution and seek more regionally nuanced alternatives. This approach would take into account the values and preferences of local societies and would allow regional players to reconcile their particular concerns and values with broader climate solutions. The many local and regional strategies then add up globally to create a portfolio of solutions that together can meaningfully help slow climate change.