By most measures of environmental policy and progress, Ontario, Canada ranks well. Over the last half-century, Canada’s most populous province required cities and industries to treat every gallon of wastewater, dramatically reduced the level of sulfur and other pollutants that caused acid rain, and convinced the big and politically powerful pulp and paper industry to install state-of-the-art emissions control equipment.

Next year, though, Ontario is scheduled to complete a 21st century environmental cleanup project that distinguishes it among North American jurisdictions. After a decade of work by the Liberal Party government, Ontario at the end of this year is scheduled to close the last of its big coal-fired generators, and leave a single small coal-fired unit available during periods of peak electrical demand until it closes next year. In shutting down the province’s 19 boilers fueled by coal, Ontario will become the first industrial region on the continent to eliminate coal-fired generation.

The decade-long process to replace a quarter of the province’s electrical generating capacity with new plants fueled by natural gas and renewable energy sources represents one of the most ambitious low-carbon generating strategies in the world. And achieving the coal-less electricity sector has yielded lessons about the constraints of government policy and public acceptance in an industrial democracy seeking to make such a momentous transition. 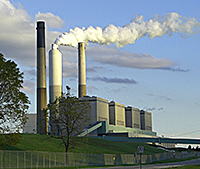 The last unit at Ontario’s Lambton plant will be shut down this year. TOBAN BLACK VIA FLICKR

“What Ontario has done is impressive,” said Tim Weis, the director of renewable energy policy at the Pembina Institute, one of Canada’s most respected environmental research organizations. “But it’s also caused a lot of resistance… The government overcame the struggles to some extent. It does illustrate what is possible, and what to anticipate in terms of getting off of coal.”

The program to end coal began that same year with an exceptional debate about energy that helped decide the election for provincial premier. Liberal candidate Dalton McGuinty and Conservative incumbent Premier Ernie Eves challenged each other on how quickly to shut coal-fired plants.

Smog, dust, and mercury emissions worried Eves, who said he could do it by 2015. McGuinty shot back that he could push Ontario out of the coal-generated electricity business by 2007, a message of energy conservation and efficiency that helped propel him to victory. McGuinty served for more than nine years as Ontario’s premier before stepping down in February.

Soon after McGuinty’s election in 2003, the provincial government began the process of closing coal plants.

In 2005, the 1,130-megawatt Lakeview coal-fired plant in Toronto, one of the province’s oldest, was shut down. In 2009, four generating units at a plant in Nanticoke and two units at another plant in Lambton were shut. A year later, two more units at Nanticoke were closed. Last year a small plant in Atikokan closed.

This year the last generating units in Nanticoke and Lambton close, and the Atikokan station is being converted to burn wood pellets. Coal consumption, coal-fired generating capacity, and emissions of mercury, other toxic compounds, and carbon dioxide from coal-fired plants will fall to near zero, according to the Ontario Environment Ministry.

Hundreds of windmills were built on farmland along the corridor from Windsor to Toronto.

The final two coal-fired generators, at a 300-megawatt plant in Thunder Bay, will close next year, according to Neal Kelly, the spokesman for Ontario Power Generation, the provincial utility.

“The 2007 deadline was ambitious,” said Garry McKeever, director of energy supply in the Ontario Ministry of Energy. “When the new government got into office it ran up against the mechanics of how to get this done. Communities worried about job losses. Industries worried about having enough power. It takes time to build replacement generation.”

According to the Ministry of the Environment, from 2000 to 2010, air quality improved province-wide in Ontario, and the phasing out of coal plants was a key reason. Ontario also implemented programs to reduce emissions from smelting plants and reduce particulates and toxic air contaminants from the transport sector. Overall, mean particulate concentrations in the province’s air fell from 8.1 micrograms per cubic meter in 2003 to 4.8 micrograms per cubic meter in 2010, a 40 percent decline.

The economic effects of the coal plant closures varied from town to town. For instance a coal-fired plant in Sarnia, an industrial city in southern Ontario along the border with Michigan, was to be replaced by a new natural-gas-fired plant now under construction. And Ontario Power Generation responded to its own staff resistance by promising severance payments, or jobs in the utility’s 65 hydro and three big nuclear plants for workers willing to transfer.

The transition away from coal also was helped by political and economic circumstances. Unlike the U.S., where miners, producers, truckers, railroads, and utilities form strong regional coal alliances, coal-fired power in Ontario had no other influential political constituencies.

Most of the coal-fired generators were also closed as the U.S. economic meltdown engulfed Ontario’s auto manufacturing sector, North America’s largest producer of vehicles and parts, and one of Ontario’s biggest power consumers. The demand for electricity fell in Ontario, a market that was producing over 35,000 megawatts of generating capacity. Ontario’s three big nuclear plants alone produce almost 13,000 megawatts of generating capacity and 56 percent of the province’s electrical power. Hydropower generates almost 8,000 megawatts of capacity and 22 percent of the electricity.

‘I’ve encouraged Americans to look across the border and learn something,’ says an energy analyst.

The province’s ample electricity supply, and the closing of coal-fired generators, carved political space for Premier McGuinty and his staff to propose generating new jobs in energy innovation and manufacturing with homegrown renewable technology. In 2009, the province enacted the Green Energy Act to promote renewable sources. It included feed-in tariff provisions, modeled after similar programs in Denmark and Germany, which offered 20-year contracts to purchase wind, solar, biomass and biogas-fueled electricity from producers at generous prices.

The new statute and its revenue provisions spurred a rush of big wind farms. Hundreds of windmills, for instance, were built on farmland along the highway corridor from Windsor to Toronto. Wind generating capacity now measures 2,000 megawatts. That will double in the next 18 months, according to the Energy Ministry, which would mean wind would produce more than 10 percent of the total generating capacity of 36,000 megawatts. The provincial government estimates that 30,000 jobs are connected to the Ontario Green Energy Act and the manufacturing and installation of wind parks.

“It’s a good story to tell and a lot of people haven’t heard it,” said Paul Gipe, an energy industry analyst from California who worked with Ontario citizen groups to replace coal with renewable energy. “I’ve encouraged Americans to look across the border and learn something.”

Ontario’s transition to cleaner energy sources, particularly in the electrical sector, reflects a trend unfolding with gathering momentum in many industrialized nations.

The U.S. also appears to be steadily moving away from coal and toward cleaner fuels.

As recently as 2007, the Energy Information Administration (EIA), a research unit of the U.S. Department of Energy, projected that the fuel mix for producing electricity in the U.S. would persist largely unchanged through 2035. According to that estimate, a little more than half of the country’s electricity would come from coal, about 20 percent from nuclear plants, and a little less than 20 percent from natural gas; the balance, roughly 12 percent, would be generated from wind, solar, biomass, and hydropower.

Citizen opposition forced the cancellation of gas-fired plants in two suburbs of Toronto.

A lot changed over the last five years. In 2012, according to the EIA, U.S. utilities burned 815 million tons of coal for electricity, down from over 1 billion tons in 2005, and the lowest utility coal consumption since 1990. Less than 38 percent of the country’s electricity last year came from coal. As recently as 2009 it was 53 percent. In its most recent assessment, the EIA projects that 49,000 megawatts of coal-fired power — equal to 50 big plants, and 15 percent of existing coal-fired capacity in 2012 — will be retired over the next seven years.

Replacing coal is a surge of plants fueled by natural gas and wind. Last year, gas supplied 29.9 percent of U.S. electricity, up from 23 percent in 2009. And in 2012, with 13.2 gigawatts installed nationally (equivalent to 13 big coal-fired plants), wind energy accounted for 42 percent of the nation’s new electrical generating capacity, more than coal and natural gas combined. Texas, of all places, generates 9.2 percent of its electricity with 12,200 megawatts of installed wind capacity.

In Ontario, 17 new natural gas-fired generating stations have been built and, with 10,000 megawatts of capacity, have replaced the generating capacity that came from coal. Both gas and wind, though, have prompted civic dissent. Citizen opposition forced the cancellation of gas-fired plants in Oakville and Mississauga, two suburbs of Toronto. And wind farms have attracted opposition in rural areas.

The discord over wind, said Tom Adams, an energy consultant in Toronto and author of Tomadamsenergy.com, a blog, is driven in part by a provision in the 2009 Green Energy Act that removed the authority of local governments to review and approve land use permits for wind projects. “People began to feel like their rights were taken away,” said Adams.

Wind energy development is also being blamed for rising electricity prices in Ontario. But Gipe, the industry analyst, responds that wind development — which accounted for less than 4 percent of all electricity generated last year — isn’t big enough to dramatically affect power prices.

Other factors also are in play, said McKeever of the Energy Ministry, including the cost of expanding and modernizing the province’s transmission grid and refurbishing the province’s big nuclear generating sector.

“The current Liberal government has heard the opposition,” said McKeever, “and is working to address the concerns of municipalities, and restoring some of those authorities. It’s been a learning process for this government.”

CORRECTION: An earlier version of this article incorrectly stated the amount of wind energy generating capacity installed in 2012; the correct amount was 13.2 gigawatts. In addition, this article originally stated that Texas generated 20 percent of its energy from wind power in 2012; In fact, wind power generated 9.2 percent of the state’s energy in 2012.