Inside Oregon State University’s Sinnhuber Aquatic Research Laboratory are rooms lined with tanks filled with thousands of zebrafish — silver, striped, one- to two-inch creatures often found in home aquariums. The lab is the domain of Robert Tanguay, professor of molecular toxicology at Oregon State, whose zebrafish are helping to answer one of the most pressing questions in environmental health and toxicology: What are the health effects of chemical mixtures?

Tanguay has pioneered the use of zebrafish in toxicology. His lab is on the leading edge of this research, designing new experimental techniques and equipment that are enabling scientists to assess the impacts of multiple chemical exposures. Using zebrafish, Tanguay and other scientists are zeroing in on why certain chemical components of crude oil spilled by the Exxon Valdez in 1989 continue to adversely affect fish survival in Alaska’s Prince William Sound. With zebrafish, they also are learning why pesticide runoff can impair Pacific Northwest salmon’s ability to navigate, and how oil from the ruptured Deepwater Horizon well is affecting marine species’ health in the Gulf of Mexico.

The lab is evaluating the toxicity of thousands of chemicals used in consumer products.

But zebrafish research goes well beyond the impact of chemical exposures on marine life. Zebrafish studies are also being used to assess the potential human health impacts of the chemical stew in U.S. Superfund sites. Tanguay’s lab is conducting research for the U.S. Environmental Protection Agency (EPA), evaluating the toxicity of thousands of chemicals used in countless consumer products. Zebrafish are also proving key to advancing our understanding of how particular chemical compounds affect the expression of individual genes that maintain and influence virtually every body system.

“Some people are still skeptical about how a fish can model human health,” said Tanguay during a tour of his lab earlier this month. “But during early development we are more similar to fish than at any other time in life.” Genes are particularly susceptible to environmental chemicals in early development. What happens then can set the stage for health throughout the rest of life.

The work of Tanguay and colleagues on mixtures is particularly important because, historically, chemicals have been evaluated and regulated one at a time. In reality, however, we are exposed to multiple chemicals daily throughout our lives. Because we now know that environmental chemical exposure can profoundly influence the development of disease, understanding how mixtures may affect human health has taken on an urgency.

“We live in a chemical soup,” says Linda Birnbaum, director of the U.S. National Toxicology Program and the National Institutes of Environmental Health Science (NIEHS). 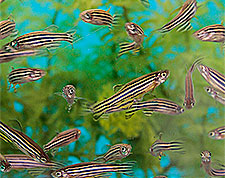 Zebrafish have been used since the 1990s for genetic modeling and screening, but it was Tanguay, while working as a post-doctoral fellow in 1995, who suggested they might be used in toxicology. Because they are vertebrates, these prolifically reproducing fish turn out to be an extremely useful model for understanding how cells in other vertebrates, including humans, respond to environmental chemicals. Zebrafish, which progress from a translucent egg to a recognizable baby fish in just 24 hours, are ideal for investigating how chemicals may affect biological processes at various stages of development.

Because zebrafish eggs develop outside the mother, they can be manipulated, and Tanguay’s lab has devised equipment and techniques for isolating the eggs to examine the effects of chemicals. In one lab, Tanguay showed me a petri dish containing translucent zebrafish eggs, no bigger than a poppy seed, and the thread-fine, glass needles used to extract genetic material. Tanguay’s researchers use that material to determine which base pair — a rung in the DNA double-helix ladder — is targeted by a particular chemical exposure.

What’s learned from these zebrafish can be used to inform human health research.

The results of these perturbations will tell the scientists if the exposure prompts any physical or health abnormalities. The zebrafish genome has been sequenced, enabling scientists to identify genes associated with specific diseases. Because many zebrafish genes have human counterparts, what’s learned from these fish can be used to inform human health research.

By figuring out which chemical targets a specific genetic receptor, scientists can begin to connect chemical exposure to health effects. Zebrafish development is readily visible, enabling scientists to identify changes in a fish’s phenotype — its physical characteristics. The zebrafish’s rapid development and short generational cycle make it possible to pinpoint effects that could be difficult to see in other animals. After linking chemical and physical effects, scientists then work to connect the phenotype with the genetic mechanisms that prompt it — or, as Tanguay says, to “connect phenotype with genotype.”

Some of these changes may result in physical abnormalities. Zebrafish exposed to certain dioxins, for example, had deformed vertebrae and skulls. Dioxin exposure also impaired regeneration of wounded fins. Other changes may become apparent in neurological, cognitive, and behavioral testing. Still others may be exhibited as abnormalities in reproduction, altered developmental timing, or changes in how metabolism and other body systems function.

Zebrafish are instrumental in research to determine the effects of ‘cocktails of pollution’ on fish species.

Zebrafish are instrumental in the research that Nat Scholz, the ecotoxicology program manager at the National Oceanic and Atmospheric Administration’s Northwest Fisheries Science Center, is conducting to investigate the effects of what he calls “cocktails of pollution” on different fish species, including Pacific Northwest salmon and herring. Among the combinations of chemicals he’s studying are those of various fuel oil compounds, particularly polycyclic aromatic hydrocarbons (PAHs) and pesticides.

Using zebrafish, Scholz and his colleagues have discovered that certain PAHs adversely impact cardiovascular development, leading to a heart failure syndrome that can be lethal to fish larvae and reduce adult fish survival. The work with zebrafish has enabled the scientists to discover why fish that looked normal were dying. By examining how low levels of PAH exposure interfere with genes involved in heart development, they have begun to understand how oil from the Exxon Valdez and Deepwater Horizon spills has impaired the cardiovascular function of fish at a cellular level.

While the PAH exposure prompts changes early in development, these effects may not become apparent until later on, when defects — in how the heart processes potassium and calcium and in heart structure — reduce cardiac function and cause swimming problems. Experiments with zebrafish have helped deduce which enzymes and genetic receptors are affected by which hydrocarbon compounds, something that’s not been possible with fish in the wild.

Tanguay’s lab is also working with the EPA and NIEHS on an ongoing project known as Tox21, which is assessing more than 10,000 commercially produced chemicals for a wide number of health effects. Zebrafish are being used as part of what is called “high-throughput” screening — the rapid testing of lots of chemicals. The goal is to fill the many gaps in toxicity data that exist for these chemicals and identify which chemical compositions or concentrations prompt specific health effects. Results of this screening are expected later this year.

“We call this Robot Row,” said Tanguay, showing me the lab area devoted to robotic machines designed to precisely dose hundreds of zebrafish eggs and genetic material samples. Because zebrafish develop so quickly, lots of variables can be examined concurrently using these machines. Tanguay’s lab uses what look like tiny paint palettes with an array of 96 little wells, each of which gets a zebrafish sample that is then dosed by a machine with a particular chemical at different concentrations. Some experimentally treated eggs are allowed to develop, while others are halted to examine impacts during embryonic development.

The lab is working to assess the toxicity of molecules invented to clean up environmental contaminants.

Tanguay is also working with Terry Collins, professor of chemistry and director of Carnegie Mellon University’s Institute for Green Science, to assess the toxicity of molecules Collins has invented to clean up environmental contaminants. These compounds, known as TAML activators, can be used to remove dyes and other toxic chemicals from water. The TAML compounds appear to be successful in degrading these hazardous chemicals, but Collins wants to make sure their use doesn’t produce other harmful compounds or effects. Collins’ and Tanguay’s labs have been testing TAML activators on zebrafish to determine any potential toxicity, including on endocrine hormones.

The scientists are examining a complex range of possible outcomes that may result from the chemicals’ interaction with specific genetic receptors at different stages of development. If no abnormal effects are seen after the various TAML exposures, Collins will be closer to determining the safety of his chemical products. If adverse effects are seen, he will have the information he needs to begin redesigning his compounds so they are safe to use. 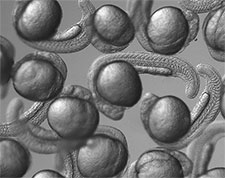 Tanguay’s lab has also designed equipment to test cognitive and behavioral responses in zebrafish. Similar to tests used with other lab animals, including humans, these experiments reveal how the brain, nervous system, and muscles may be affected by certain chemicals, such as organophosphate pesticides, known neurotoxicants that have been linked to adverse neurological effects in children. By using zebrafish, scientists have begun to locate which neurons these chemicals may affect at particular stages of development. These experiments are also being used to test the effects on fish of pesticide-laden water running off fields and roads.

The ultimate goal is to learn which chemical combinations, concentrations, and structures alter the normal function of genes and hormones. There is strong evidence, for example, that interference with endocrine system hormones and the genes that regulate them can lead to metabolic disorders such as diabetes and obesity. Research has also shown that endocrine-disrupting chemicals can upset reproductive, developmental, immune system, and neurological health. In addition, scientists have discovered that altered gene expression — distinctly different from genetic mutation — can be passed from one generation to another in what are called epigenetic effects. Pinpointing these precursors to disease is key to protecting and improving human health.

The ability to connect specific chemicals in the environment with mechanisms of disease is essential to finding and “eliminating those that are nasty,” explains Tanguay. In a world where manufactured chemicals are ubiquitous, the tiny, fecund zebrafish is playing a big role in discovering how this chemical stew is affecting our health.