Aeolus Cave runs into the side of a mountain in Dorset, Vermont, like a tunnel. At its mouth, there’s a large chamber with a vaulted ceiling, which has been nicknamed Guano Hall. Further along, the cave narrows into a network of passageways so tight that no one knows how far they extend. In the 1960s, a team of biologists estimated that a quarter of a million bats gathered each winter in the passageways of Aeolus to hibernate. Many doubted this estimate, but later studies confirmed it. 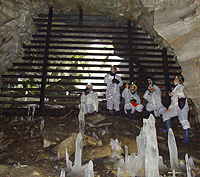 Photo courtesy of The Nature Conservancy
Researchers inside Aeolus Cave in March, 2010.

One day earlier this month, Scott Darling, of the Vermont Fish and Wildlife Department, Susi von Oettingen of the U.S. Fish and Wildlife Service, and David McDevitt of the Nature Conservancy, snowshoed up to Aeolus Cave to count up how many bats remain there. It was a bright blue day and a recent storm had coated the trees with a thick layer of ice. Near the entrance to the cave, the group stopped to have lunch; it was observed that after the count, no one would really feel like eating. Darling handed out helmets and Tyvek suits, which he’d been carrying in his backpack.

As is the case with most hibernacula in New England, the bat population at Aeolus has been hard-hit by white-nose syndrome, the still somewhat mysterious ailment first detected in upstate New York in the winter of 2007. In the winter of 2008, Darling arrived at Aeolus and found the cave littered with dead bats. The following winter, there were so many dead bats on the floor of the cave that they formed a sort of a carpet. By last winter, the dead bats had decomposed, and the ground was covered in tiny bat bones.

In a normal year, there used to be between 1,000 and 3,000 bats hanging from the ceiling in Guano Hall. Last winter, the count in the hall was down to 112. Assuming that the hall is representative of the cave as a whole, this means the bat population at Aeolus had plummeted by at least 88 percent.

Some evidence suggests the fungus was brought to the U.S. from Europe, perhaps from an unwary spelunker.

Here’s what is now known about white-nose syndrome: the powdery white substance that gives the syndrome its name is fungus from the genus Geomyces. (For its destructive power, it’s been named Geomyces destructans.) Geomyces destructans grows only in cold conditions — when bats hibernate, their body temperature drops to the level of their surroundings — and it sends out hyphae, or filaments, that enter the bats’ skin through their glands and hair follicles. It’s able to break down bat tissue — a recent paper described it as “digesting, eroding and invading the skin of hibernating bats” — which, as Darling observed, “is a very unusual behavior, if you can use that term, for a fungus.” White-nose syndrome can be spread from bat to bat, and experiments performed in Vermont have shown that bats can also contract it from the environment.

Still, it’s not clear exactly how white-nose kills bats, or if in fact it does. One hypothesis is that the fungus kills them directly. Another is that it irritates the bats, which causes them to wake from their torpor and use up the fat reserves they need to survive the winter. A third is that white-nose is an opportunistic infection that reflects some deeper, immunological problem. It’s not clear how Geomyces destructans was introduced into caves in the Northeast, though some evidence suggests that it was brought in from Europe, perhaps by an unwary spelunker.

Once everyone had suited up, the group made its way to the mouth of the cave. Even before white-nose hit, the Nature Conservancy, which owns Aeolus Cave, had installed a gate across the entrance to protect the bats from disturbance. McDevitt fished out a key and, after several tries, managed to remove one of the slats from the gate; this created an opening just big enough for a person to crawl through.

The floor of the cave was still covered in tiny bat bones, but the ceiling was nearly empty.

Inside Guano Hall, icicles hung down from the ceiling, and knobs of ice rose up from the ground, like columns. The floor was still covered in tiny bat bones, but the ceiling, which just a few winters ago was covered with clusters of hibernating bats, was nearly empty. Darling gestured toward a hollow in the cave wall. “That area used to be covered in bats,” he said. “This is damn near dead.” The group searched for an hour, and managed to locate just 35 live bats — 33 little brown bats (Myotis lucifugus) and 2 northern long-eareds (Myotis septentrionalis). One of the bats was awake and grooming itself, probably a sign, von Oettingen observed, that it was suffering from white-nose.

“I guess the question is: What’s going to be the bottom here?” she said. “We do have sites with none.”

Darling said that in hibernacula that have been monitored in Vermont, populations are down between 85 and 100 percent compared with just five years ago. Other states — white-nose has now been detected in 13 states, from New Hampshire to Tennessee — have reported similar mortality rates. It’s been estimated that since the syndrome was first observed, at least a million bats have died, which, as one recent publication put it, “far exceeds the rate and magnitude of any previously known natural or anthropogenic mortality events in bats, and possibly in any mammalian group.” 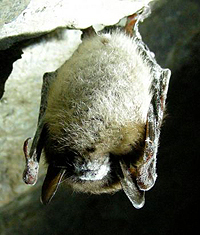 USFWS/Wikimedia
The powdery white substance that gives white-nose syndrome its name is fungus from the genus Geomyces.

On the way back down the mountain, Darling discussed efforts to find a cure for white-nose. In the lab, Geomyces destructans can be killed by a variety of anti-fungal agents, including athlete’s foot medications. But when wildlife biologists in New York tried to treat hibernating bats with an anti-fungal agent, all of the treated bats died — though whether from white-nose or from being handled is not clear.

Vermont is now in the process of adding little brown bats and northern long-eared bats to the state’s list of endangered species. The proposed listing of the little brown is particularly shocking, as the bat was, at least until recently, the most common in New England — so much so that no one paid much attention to it.

“Five years ago, if you had asked me, ‘Well, can you imagine anything that would make your little brown bat go to one of your rarest species,’ I probably would have laughed and said, ‘No that’s not even possible,’” Darling said. “Even if it’s an invasive fungus, to think that it could have a regional impact that fast would be really surprising.”

“The difficult thing is, well what do you do about it?” he continued. “And I wish I had answers for that.”