The lucky country, as Australians call their homeland, sits on enormous deposits of natural resources: uranium, zinc, iron ore, lead, bauxite, copper, gold, manganese, and nickel. But among its greatest assets are the world‘s fourth-largest coal reserves — an estimated 76.4 billion tons, or 9 percent of global reserves.

Coal mining has powered the Australian economy for decades. In recent years, thanks to the seemingly insatiable energy appetite of China and other Asian countries, Australia’s coal industry has been growing at dizzying speed, its production rising 80 percent since the early 1990s and its exports more than doubling in the past decade. If all proposed mining projects move ahead as planned, Australia, currently the world’s second-largest exporter of coal after Indonesia, could double its overseas shipments by the end of the decade to become the world’s largest coal exporter. Today, roughly three-quarters of Australia’s domestic electricity production comes from coal, making the sparsely populated continent of 23 million people the world leader in per capita greenhouse gas emissions.

So what are the odds that the country can overcome its coal addiction? Just a year or two ago, after Labor Party Prime Minister Julia Gillard and her Green Party allies successfully introduced a national carbon tax and set ambitious renewable energy goals, the prospects looked reasonably good. This month, however, things abruptly changed. On September 7th, staunch conservative Tony Abbott — a man who once dismissed human-caused climate change as “absolute crap” — was elected prime minister, significantly dimming the prospects that Australia will reduce its reliance on coal mining and coal exports anytime soon. 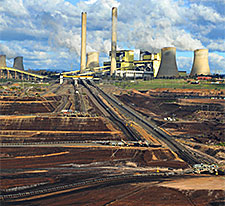 Conveyor belts carry coal from an open cut mine to a power station east of Melbourne. PAUL CROCK/AFP/GETTY IMAGES

Environmental activists and members of the Green Party take some consolation in the fact that the public has become increasingly worried in recent years about the environmental impacts of the country’s massive, open-pit coal mines. Australians also have been shaken by a noticeable jump in extreme weather events, which scientists partly attribute to climate change. In addition, an increasing number of Australians are concerned about a major expansion of coal export terminals in the state of Queensland, which could threaten the country’s iconic natural wonder: The Great Barrier Reef.

“We’re seeing more and more people becoming aware of what is going on, and they are outraged,” Larissa Waters, the only Green Party senator from the coal rich-state of Queensland, said in an interview. “If it comes to turning the reef into a coal and gas highway or protecting it, people want it protected.”

Environmentalists also note that commodity prices have fallen steeply, which has caused a slump in Australia’s mining sector. The economic slowdown in China is putting a strain on Australia’s coal industry and shrinking the government’s revenues. As a consequence, several new coal-mining projects have been shelved, and the coal industry has shed 11,000 jobs in the past year. Five Asian nations — Japan, China, South Korea, India, and Taiwan — account for 88 percent of Australian black coal exports.

Outgoing Prime Minister Kevin Rudd worried about the impact of the slowdown of China’s economy on Australia’s coal sector and urged diversification of an economy overly dependent on coal and other forms of mining. But the newly elected Abbott and his Liberal-National coalition dismissed Rudd’s hand-wringing and vowed to reverse the slump in coal mining. After his recent election victory, Abbott announced that Australia was “open for business.” His coalition has promised to scrap the carbon tax, dump a climate advisory body, expedite approval for new coal mining projects, and loosen environmental regulations governing the coal industry.

The industry says it is investing $25 billion in new coal mining projects that could increase production by 20 percent.

Many Australians applaud such steps. The coal industry has a powerful lobby, and a report commissioned by the Australian Coal Association (ACA) said the industry generates 43 billion Australian dollars in revenue annually. The industry takes credit for the fact that Australia was the only G10 country whose economy did not slip into a recession during the global financial crisis in 2009.

The ACA projects that exports of thermal coal, which is used to produce electricity, will grow at 11 percent a year for the next five years. The association also says that coal companies are investing $25 billion in new coal mining projects that could increase production by about 20 percent by the end of next year. Nine new “mega mines” are proposed for the Galilee basin in Central Queensland, five of which would be larger than any mines that currently exist in Australia. A host of environmental groups are opposing the Galilee projects, which would comprise one of the largest coal mining complexes in the world.

To accommodate growing exports, Australia is expanding existing coal ports and building new ones, some of them along the coast of Queensland, not far from the 1,430-mile Great Barrier Reef. A government-commissioned report found that port expansions could seriously disturb reef ecosystems, since spoil from dredging can travel long distances. Dumped silt also can be moved repeatedly by storms, damaging coral and threatening marine animals like sea turtles and dugongs, which have a hard time finding food in murky waters. Critics warn that increased ship traffic also brings with it a higher risk of accidents, such as the one three years ago when a Chinese coal freighter crashed into the reef.

The coal boom threatens the reef in less direct ways, as rising greenhouse gas emissions lead to higher seawater temperatures and worsening ocean acidification, both of which can damage or kill coral reefs. Scientists have calculated that the reef, which in 1981 became the first ocean region to be recognized as a UNESCO World Heritage site, has lost half of its coral since 1985.

In Australia, there are growing concerns that a boundless expansion of coal mining may damage the reef to such an extent that UNESCO could place the reef on a list of World Heritage sites in danger. At its annual meeting in June, the UNESCO World Heritage Committee decided to give Australia a grace period until 2014 to come up with a convincing rescue plan.

“When it comes to coal and gas, our government is completely blinded,” Waters, the Green Party senator, said in an interview. “They just want to export as much of the stuff as they can.” She is fighting a seemingly futile battle with the traditionally conservative Queensland Legislative Assembly to write UNESCO’s recommendations for the reef‘s protection into law. “First,” she said, “no ports in untouched regions. Second, no port expansions that could impair the universal value of the reef. And third, a moratorium on port projects until 2015.”

Industry representatives dispute that coal mining poses a threat to the reef. “I see a bunch of these activists jumping up and down, saying that we are destroying the reef,” said Paul Mulder, managing director for coal and infrastructure with the Australian-Indian energy giant GVK Hancock Coal. “They have no idea what they‘re talking about.”

“We are in the coal business,” Queensland‘s Premier Campbell Newman said in response to UNESCO criticism. “If you want decent hospitals, schools, and police on the beat, we all need to understand that.” Last week, Newman told Abbott that his top priority was developing the Galilee basin and that the best thing the central government could do was “just to get out of the way.”

Over the last 30 years, no country has shipped more coal abroad than Australia.

Looking at the numbers, it seems unlikely that Australia could stop being a major source of coal in the foreseeable future. Over the last 30 years, no other country in the world has shipped more coal abroad, with exports reaching 457 million short tons in 2011.

Stopping Australian coal exports, however, is precisely what a growing number of environmental activists are attempting to do. Greenpeace has openly called for civil disobedience to stop exports, and in April activists briefly occupied a coal freighter bound for South Korea. American environmentalist Bill McKibben, who toured Australia in June to campaign against coal mining, was impressed with the public attention he received. “We had sellout crowds all over the place, and there was lots of press,” he wrote in an e-mail. “Apparently the coal industry thought it was a threat, because they came after me fairly hard.”

The industry has good reasons to be thin-skinned. Analysts blame the big mining companies for over-investing during the boom and ignoring the signs that demand from Asia could slow down in the long run. In May, the Australian Coal Association issued a statement saying that “rapidly deteriorating investments in coal mining and coal infrastructure projects reinforces the urgent need for State and Federal governments to focus on the competitiveness of the coal industry.”

That is precisely what Abbott has pledged to do, and this month’s election results were an indication that many Australians place concerns about the country’s resource-based economy above fears of climate change or the environmental degradation associated with coal mining.

But environmental advocates say that despite Abbott’s victory, their message about the long-term damage done by coal mining — including threats to the Great Barrier Reef — is resonating with many Australians. One reason may be that Australians are feeling the effects of a changing climate earlier and more strongly than other nations. Storms and floods are increasingly common, as are heat waves, wildfires, and droughts.

“The coal industry presents itself as quintessentially Australian,” said John Hepburn, founder of the Sunrise Project, an environmental group fighting the expansion of coal mining. “There is this sense that we are rich in natural resources, and what we do is we dig them up … [But] the movement against coal has been growing incredibly rapidly. Something in the Australian psyche is starting to change.”