Charles Darwin called the birds that would eventually become known as “Darwin’s finches” a “most singular group.” The finches — 14 different species, all but one of which are found only in the Galápagos Islands — have since been described as a “classic example of adaptive radiation,” as “totems of evolution,” and, rather less flatteringly, as “muddy-looking little birds.” Two of Darwin’s finches — the mangrove finch and the medium tree finch — are now listed by the International Union for Conservation of Nature as critically endangered, and several others, including the warbler finch and the woodpecker finch, seem to be suffering serious declines. 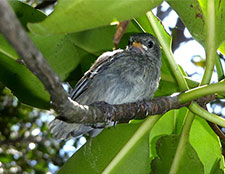 Mangrove finches are one of 14 species of Darwin’s finches found in the Galápagos. FRANCISCO CUNNINGHAME

The reasons for this are complex and probably involve a dark synergy between habitat destruction, disease, and predation by introduced species. One of the main culprits has recently been identified as a parasitic fly — also an introduced species — called Philornis downsi. Researchers who work in the Galápagos warn that unless a method is found to control the fly, one or more of the iconic finch species could be lost.

“There are studies that show mortality due to Philornis in the nest, and it’s quite high,” said Charlotte Causton, a researcher for the Charles Darwin Foundation who is coordinating the effort to find a response to the fly. “You’ve got these species of birds that are critically endangered and a large number of their fledglings are dying.”

The fly, which is known only by its Latin name (Philornis means “loves birds”), belongs to same family as the housefly. Its native range includes Trinidad and Brazil and probably other countries in South America, though no one is quite sure. It seems to have been introduced to the Galapagos back in the 1960s — individuals have been found in museum collections — but it was not until the late 1990s that it began to attract attention from ornithologists.

As adults, Philornis downsi are harmless, but their larvae lead short, ghoulish lives.

“We’ve been struggling ever since,” Causton said.

As adults, Philornis downsi are harmless, but their larvae lead short, ghoulish lives. Females lay their eggs in birds’ nests just as chicks are emerging. A day or two later, the eggs hatch and the larvae — about the size of a grain of rice — make their way inside the nostril cavities of the baby birds. The larvae eat away at the chicks’ nasal cavities for about three days; then, in subsequent larval stages, they migrate to the bottom of the nest, where they remain hidden during the day. At night, they emerge to feed on the chicks’ blood. In many nests, the parasite load is so high — in one nest, 184 Philornis downsi larvae were counted — the chicks can’t survive. Those that do live often end up deformed and have difficulty feeding.

“Usually their beak is all messed up,” said George Heimpel, an entomologist at the University of Minnesota who has done research on the fly. “And for Darwin’s finches we know that the beak is an important part of their livelihood.” It is the shape of the various finches’ beaks, which enables them to make use of different food sources, that has fascinated students of evolution ever since Darwin.

So far, no bird species has gone extinct in the Galápagos since humans reached the islands in the middle of the sixteenth century. (This is a lot better than can be said of birds on archipelagos like the Hawaiian Islands.) But some finch species have suffered local extinction, meaning they’ve vanished from at least one of the islands they previously inhabited. For instance, the warbler finch seems to have disappeared from the island of Floreana. The mangrove finch, which used to be found on the islands of Fernandina and Isabela, is now confined to a thin slice of Isabela, and it is believed there are fewer than 80 birds left.

Francesca Cunninghame is an ornithologist from New Zealand who works for the Charles Darwin Foundation and has spent the last several years studying the dwindling population of mangrove finches. Reached by cell phone on the island of Santa Cruz, Cunninghame said that during the most recent mating season, which ran from January to May, 20 mangrove finch chicks hatched. Six of these — nearly a third — died before fledging, most likely owing to parasitism by Philornis downsi.

No bird species has gone extinct in the Galápagos since humans reached the islands in the mid-16th century.

“We’ve found 60, 80, up to a 100 larvae in the nests,” she said. “It’s a huge burden for a little chick.” The situation for the mangrove finch has grown so dire that, starting in early 2014, the Charles Darwin Foundation, in collaboration with the San Diego Zoo and the Galápagos National Park Directorate, is planning to remove mangrove finch eggs from their nests and try to raise the chicks in incubators.

Last year, several Galápagos conservation groups sponsored a workshop on Philornis on the island of Santa Cruz. Experts from as far away as Austria and Australia attended the meeting, which ended with a resolution “to develop novel methods” to control the fly. But the effort to find a workable method has been hampered by a lack of funds and also by difficulties researchers have encountered trying to raise the flies in the lab.

“What’s so ironic is that this fly in the field is adapted to all nest types and habitats,” Causton said. “But it’s really hard to get the eggs to hatch and to raise them through the first instar stage.” Because of this difficulty, researchers in the U.S. have had to import new flies from Galápagos every year to continue their work.

“In terms of all the personnel and shipping, it gets to be pretty expensive on a per-fly basis,” noted Stephen Teale, an entomologist at the State University of New York’s College of Environmental Science and Forestry, who has also studied the fly. Teale said he was hoping to get more flies into his lab when a new nesting season begins this winter, but that he was having trouble getting the necessary permits to bring them into the country. 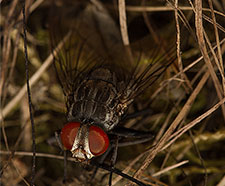 The female Philornis downsi lays its eggs in the nests of birds as chicks are emerging. HENRI HERRERA, CHARLES DARWIN FOUNDATION

One possible control method involves introducing to the Galápagos one of the fly’s native enemies, most likely a parasitic wasp. But this sort of use-an-invasive-to-catch-an-invasive approach is risky, and before any new insect could be released on the archipelago, it would have to be shown that it posed no danger to the islands’ endemic species. So far, only one attempt at so-called biocontrol — using an introduced ladybug to fight an introduced scale insect — has been tried on the Galápagos, though many others have been considered.

Another possible approach would be to figure out what chemical compounds attract the fly, and use these either to trap the insects or at least to confuse them. Teale, who has been working on this approach, said there is good reason to believe that the flies are attracted by compounds released when the chicks hatch, because females seem to be able to time their egg-laying quite precisely.

Yet another possibility, particularly intriguing given the finches’ place in the history of biology, is that the birds could adapt to the fly. There is some evidence that the small tree finch, one of the few finches whose population seems to be on the increase, is learning how to fight the fly by adopting new behaviors. For instance, adult finches have been observed eating the larvae, thereby reducing their numbers.

“Certainly the selective pressure is high,” Teale observed. “The question is: Can they evolve a survival strategy fast enough?”