The giant hardwood tree lay on a hillside in the West African state of Ghana. George Ayisi, drenched in sweat and sawdust, painstakingly cleaned the teeth of his chainsaw, then cut the freshly felled trunk into five-meter lengths, and sawed the first of them lengthways to take out a quarter segment.

His companions from the nearby village rolled that huge segment onto the ground, where they took it in turns to cut planks. It was precision work. Barely a slither of timber was left behind when they downed their tools, balanced the planks on their heads, and picked their way down the hillside through a cocoa farm to the road. “The government says this is illegal,” said Ayisi, spitting out sawdust, “but how can they tell us not to do this? This is our land — these are our trees.”

Welcome to the illegal face of logging in Ghana. Around 100,000 villagers are involved in this work — not usually in the rainforest (there isn’t much rainforest left in Ghana), but on thousands of farms run by smallholder owners who treasure their surviving large trees as money in the bank. 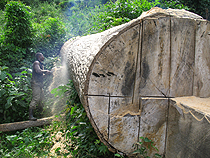 Courtesy of Fred Pearce
Ghanaian villager George Ayisi uses a chainsaw to cut a massive tree trunk.
Â
Ayisi’s planks would later be trucked to a large lumber market that employs some 600 people in the nearby town of Oda, northwest of the capital Accra. It is one of dozens of such markets across the country — all entirely open and all entirely illegal.

I toured Oda market with Kwame Attafuah, local organizer for DOLTA, Ghana’s national union of chainsaw operators. “The government says we destroy the forest and create deserts. But it’s lies,” he said. “We supply almost all the timber used in Ghana. All the officials and ministers buy from us, but they still blame us and make us illegal.”

Attafuah clearly had a point. Since 1998, all chainsaw-milled lumber production, transport, and trade of chainsaw-milled lumber in Ghana has been illegal. But the chainsaw operators still supply almost all the timber used in the country, from humble chairs and wardrobes on sale by the road in almost every town to the giant beams in the new national stadium in Accra.

This business operates in parallel with another, legal, industry that cuts up timber at sawmills rather than using chainsaws, is dominated by a handful of large companies, and is largely devoted to exports for Europe, the U.S., and Asia, especially China.

With Ghana’s natural forests almost gone, many say Ghana has got its lumber laws the wrong way round. It should legalize the chainsaw teams and the domestic trade that Ghanaians depend on, and outlaw the exporters.

This is not just a conundrum for Ghana. For it goes to the heart of global forest governance and the ambition — widely voiced at the recent Earth Summit in Rio de Janeiro — to halt global deforestation by the end of the decade.

To that end, there is a growing call for all importing nations to outlaw illegally logged timber. In 2008, the U.S. amended the Lacey Act to prohibit the import of wood that was harvested illegally — the world’s first such ban. And beginning in March next year, the European Union will have its own

European Union officials are calling for reform of forest governance inside timber-exporting countries like Ghana.

regulations requiring proof of legality for every timber load arriving at European ports.

The theory is that, by backing existing domestic lumber laws with trade sanctions, importers can improve forest sustainability around the world without upsetting the national sovereignty of exporting nations. But what if the domestic laws are all wrong? What if backing them makes a bad situation worse, by providing a stamp of respectability for rapacious timber giants, while reinforcing the criminalization of their smaller rivals who supply local needs?

Those drafting the European Union laws are well aware of these questions. While trying to outlaw illegal loggers from the international trade, they are also calling for reform of forest governance inside timber-exporting countries like Ghana.

Thus, Europe’s new timber regulations are intended to operate primarily through a series of voluntary partnership agreements. Under these agreements, exporting countries license legal timber companies and track timber flows. But they also encourage environmental groups and other representatives of civil society to get involved in deciding forest policy and ensuring that those policies work for forest communities.

One reason for this European approach, which is much more interventionist than the Lacey Act, is strictly practical. Rampant illegal logging is obviously a big barrier to ensuring that timber exports are legal

A union official calculated that bribes paid to police for illegal transport of lumber in his region totaled $100,000 a week.

— the more so when it is as routine as in Ghana.

Sitting in his office in the provincial Ghanaian town of Asamankese, Patrick Agyei, secretary of DOLTA’s eastern region, calculated for me the bribes paid to police for the daily passage of 20 trucks carrying lumber from his region to Accra. At $750 a truck, it worked out at just over $100,000 a week. Routine traffic patrollers were getting rich, he said — not exactly providing incentive for cracking down on illegal logging.

The activities of chainsaw operators are frequently criticized by environmentalists. But independent forest researchers I spoke to said this is simply pandering to propaganda from their bigger, legal, more powerful rivals. Small-scale chainsaw millers are the selective loggers, they say, taking individual trees from farmers’ land rather than ransacking natural forests. And because their work is sweaty and labor-intensive, they have no incentive to waste the timber they cut.

The common perception that the small-scale operators waste more timber than their bigger rivals is open to question. The most widely quoted study in Ghana, by Emmanuel Marfo of the Forest Research Institute of Ghana, estimated that chainsaw loggers only sold 30 percent of the timber they cut — but that was scarcely worse than the commercial sawmills’ 38 percent. And Ghanaian national statistics suggest that, with total annual wood sales of 1.9 million cubic meters and the harvest at around 6 million cubic meters, 30 percent is about the national average. If they are inefficient, they are certainly not alone.

The demonization of the chainsaw operators is misplaced, according to Elijah Danso, a forest consultant in Ghana for the last two decades. Illegal chainsaw loggers are probably cutting as much timber as the legal companies, while doing less environmental damage and more social good than the legal sector, he says. A study by Ghanaian forest consultant Gene

Birikorang, for the Washington-based Rights and Resources Institute, suggested they also deliver more than twice as much GDP as the legal sector.

The European Union would like to see the chainsaw operators brought within the law. But the obvious route of changing the law seems to be blocked. “We are not legalizing chainsaw operators,” said Chris Beeko, director of the timber validation department at the government’s Forestry Commission in Accra. Instead, he says, they will be encouraged to join the legal industry by switching to mobile sawmills.

But the chainsaw millers I met dismissed this idea. Mobile sawmills cost a great deal more than chainsaws, are far more difficult to take into the field, and do not even do a better job. Such a policy is more likely to squeeze out small operators than to improve timber extraction. That might be just what the big operators have in mind.

But there is a more fundamental issue here — a failure of forest governance in Ghana bigger even than the criminalizing of an essential national industry. It is about the ownership of the forests.

While rural communities in Ghana control their land, the state has legal ownership of the trees on that land. The Forestry Commission hands out logging concessions, mostly to the large timber exporting companies, with barely any compensation paid to communities.

In theory, those concessions are supposed to be allocated through competitive tender, to prevent corruption. But in practice there are loopholes. A prime example is Timber Utilization Permits (TUPs), which are issued by the Forestry Commission and do not require competitive

‘The big companies just come onto our land and do what they want. We don’t have any right to stop them.’

tender because they are supposed to be for use by local communities who want to log their forests non-commercially.

More than a third of the country’s logging concessions have been allocated through 124 TUPs, according to a study this year by Jens Friis Lund and colleagues from the University of Copenhagen. But he found that “all 124… have been granted to timber firms, not community groups.” Many of these firms have “no track record in the forestry sector,” according to Lund. They appeared to be “rewards, possibly for political support.” The Forestry Commission’s Beeko admitted that the system “had not worked well.”

Rural communities are supposed to benefit from taxes and other state revenues from the timber trade. But in practice, says Lund, annual state revenues add up to only about $20 million, or a paltry 6 percent of the value of the timber at the time it is cut. And only a tenth of that revenue gets back to communities, while more than three-quarters goes to the Forest Commission bureaucracy.

It is little wonder that those communities prefer to invite the illegals in to cut their timber. Even though the price of domestically-traded timber is much lower than that for export, the communities get a bigger return from the chainsaw millers. The chief of Brakumans community near Asamankese, Barfour Kwame Ackom, told me: “The big companies just come onto our land and do what they want. We don’t have any right to stop them. We want the government to legalize the chainsaw people because they are part of our community.”

Ultimately, changing the destructive dynamics of Ghana’s forest industry requires a fundamental reform of the ownership of the forests, according to Danso, the forestry consultant. “If we changed ownership so that farmers could profit legally from every tree that was cut on their land,” he says, “then they would be much more likely to protect their trees.” That, surely, is the lesson of other “tragedies of the commons” around the world. Only some form of ownership encourages responsible management.

But meanwhile, the prospect for the serious forest reforms that could bring that about in Ghana are receding, say local activists. “Those of us who want reform don’t see it happening,” says Danso. “The government and its civil servants have learned to please the European Union and our own NGOs with rhetoric, but without delivering reform.”

Digital Defenders: Tribal People Use GPS to Protect Their Lands

From the rainforests of central Africa to the Australian outback, Fred Pearce writes, indigenous people armed with GPS devices are surveying their territories and producing maps they can use to protect them from logging and other outside development.READ MORE
Lund, of the University of Copenhagen, has little doubt about the reason for this. “The [existing forest] governance regime has served the entrenched interests of an economic and political elite [that has] resisted any attempts at reforms that could threaten its favorable position.” This is bad news for Ghana’s surviving natural forests. Danso believes the government is resigned to losing them. “Its attitude is that when the forests are gone, they will do plantations,” he says.

In the final cynical rush to grab the last forests, the demonization of the small-scale chainsaw operators is convenient — but largely false. These operators are not angels. But they are mostly meeting local needs through selective logging on existing farmland, while providing income for local farmers and employment for local communities. They are as essential to a country like Ghana as smallholder farmers. They and the communities they come from should be supported and encouraged to take control of their forests.

The real villains are elsewhere — whatever the law may say.