In the years leading up to the massive tsunami of March 11, 2011, it seemed that Japan’s coastal ecosystems could hardly decline in health any further. Decades of coastal engineering had divided land from ocean, turned quaint seaside towns grey with concrete, and pushed once-familiar species like loggerhead sea turtles and common orient clams towards extinction. Nearly half of the island nation’s perimeter was modified in some way; cliffs comprised most of what remained untouched. Even within the government, a sense had begun to spread that in a country where the sea has shaped culture and cuisine for millennia, coastal land management had taken a wrong turn.

Then came the once-in-a-thousand-year tsunami. Walls of water swept over the coast of northeastern Japan, claiming more than 15,000 lives and destroying hundreds of thousands of buildings, together with 60 percent of seawalls. In the rubble-covered wasteland that remained, scholars, activists, and fishermen alike saw a chance to rethink how people live on the coast.

Instead, national and regional government bodies are moving to recreate the concrete coastline that existed before. Reconstruction plans in heavily damaged Iwate, Miyagi, and Fukushima prefectures call for a string of stunningly tall and wide seawalls. Some have already been built; many others are in the final stages of planning. A second layer of raised earthen banks topped with pine trees is also planned in many places. And with Shinzo Abe’s Liberal Democratic administration promising a major infusion of funding for disaster prevention projects nationwide, new seawalls are in the works well beyond northeastern Japan.

The government has let slip a rare chance to heal past harm by implementing more sustainable strategies.

The goal is to protect human communities along the coast. But ecologists, environmentalists, and some coastal residents say the plans are an environmental calamity.

“We’re facing the possibility that it’s not the tsunami but rather the reconstruction work that will wipe out the extremely important natural ecosystems along the coast,” said Yoshihiko Hirabuki, a plant ecologist at Tohoku Gakuin University in Sendai, Miyagi Prefecture. In part, the problem is that many of the new seawalls will be taller, wider, and possibly longer than they were before the tsunami, endangering seaside ecosystems that managed to survive earlier decades of coastal engineering. But Hirabuki and others are also frustrated that the government has let slip a rare chance to start healing past harm by implementing new, more sustainable coastal management strategies.

Hirabuki is one of many scientists who surveyed tidal flats, wetlands, beaches, and bays in northeastern Japan following the tsunami and concluded that, despite severe damage at some sites, wild plants and animals are making a strong recovery. He says plant communities on Sendai’s coast have bounced back “beyond all expectations,” and describes some sections of the beach as a flower garden of native plants humming with local bee species. The tsunami created new habitats, as well: In a 2011-2012 survey of the disaster zone, the Nature Conservation Society of Japan identified twenty new marshes.

An illustration of a seawall planned in Miyagi Prefecture, one of the areas most affected by the 2011 tsunami. MIYAGI PREFECTURE

The reconstruction is threatening that natural recovery in a number of ways. Depending on their design and location, seawalls — some of which are 45 feet tall and more than 150 feet wide — can block the movement of water, sand, and living organisms between land and sea. They can physically obliterate tidal flats, dunes, and other important habitats — as can coastal roads and earthen embankments. The construction work required to build these structures can also severely disturb natural habitats.

The central government’s environmental impact assessment laws do not apply to seawalls, disaster prevention forests, and two-lane roads like those being built and planned on the coast. However, Miyagi and Iwate Prefectures have set up committees to discuss the potential environmental impact of the work.

”As we carry out the construction work we are taking each ecosystem into consideration and receiving advice from experts,” Masayuki Kadowaki, who oversees seawall planning as director of the rivers division of Miyagi’s Public Works Department, said in an email.

Critics counter that these measures will bring little real change.

“What we are at great risk of losing is the seashore itself,” says Ryuichi Yokoyama, director of the Nature Conservation Society of Japan, which is campaigning against the current reconstruction plans. Northeastern Japan’s coastal ecosystems are difficult to protect, he says, because they are both narrow and congruent with the planned sites of coastal engineering projects: “You have a zone that’s maybe a fifth of a mile wide,” said Yokoyama. “You build a seawall and a road and your fifth of a mile is gone.”

‘What we are at great risk of is losing the seashore itself,’ says one scientist.

Satoquo Seino, a professor of environmental engineering at Kyushu University, says it’s the first time coastal land use has become an issue of national debate.

“[When policy is set] disaster prevention comes first — ecosystems are secondary,” says Seino, who sits on the central government’s specialist advisory group for coastal policy. Government planners are making an effort to listen to recommendations from ecologists. But, said Seino, “Those groups don’t have political power or money. Opinions from the construction industry take priority, so we are not seeing any big changes.”

The roots of the coastal land-use debate go deep. People first began moving from higher elevations down toward Japan’s seashore, which offered rare expanses of flat land, at the beginning of the Edo period (1603-1868), Seino says. “Over a period of 400 years Japanese moved further and further into these dangerous areas, as modernization allowed for more public works projects,” she explains. “[Today], by law, the land management concept is to claim everything down to the high-tide line as human territory.” 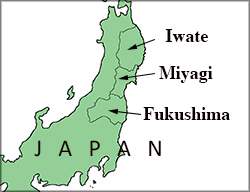 In the three most heavily damaged prefectures, plans call for extensive rebuilding and expansion of seawalls. YALE ENVIRONMENT 360

The percentage of fully or partly artificial coastline has now surpassed 56 percent on Honshu, Japan’s main island, according to the Ministry of Environment. In 1945 the country had about 84,000 hectares of tidal flats; by 2001, reclamation for agriculture, industry, and housing had reduced the figure to less than 50,000 hectares, the government reported. The Ministry of Agriculture, Forestry, and Fisheries says some 55,000 hectares of seagrass beds were lost between 1988 and 2001. Beach erosion has become a serious problem, as well. And with waves now breaking directly on seawalls in many places, less and less beach remains for sea turtles to nest or endangered plants to thrive.

The reconstruction strategy in northeastern Japan calls for expanding the structures that caused these environmental problems. Badly damaged prefectures such as Fukushima, Miyagi, and Iwate all have announced plans to increase the height, width, and, in some cases, the length of seawalls. Prefectural bureaucrats determine the height of these walls according to formulas provided by the central government. The walls promise protection from tsunamis that occur once every few dozen to 100-plus years — not the much rarer mega-tsunamis like that of 2011.

Before the tsunami, Miyagi Prefecture — which has a mile or more of flat land between the mountains and sea in many places — generally had fewer and shorter seawalls than neighboring regions. Some beaches lacked them altogether. In the northeastern district of Kesennuma, activist and oyster farmer Makoto Hatakeyama says tiny inlets like the one where he lives remained in a relatively natural state. “People had a close relationship with the sea,” he says.

Now, Miyagi’s government is planning to greatly increase the height and width of many seawalls. In Hatakeyama’s hamlet, the prefecture proposed a wall 32 feet high — to the utter disbelief of Hatakeyama and his fellow fishermen and women. 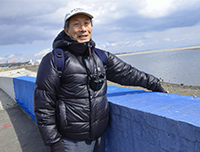 Takao Suzuki, a marine ecologist at Sendai’s Tohoku University, says a number of the new walls will fragment or smother tidal flats. That has already happened in one part of famously beautiful Matsushima Bay, north of Sendai.

But plant ecologist Hirabuki is even more concerned about the so-called “disaster prevention forests” that are being planned as a second line of defense behind the concrete. Coastal dwellers traditionally planted these strips of pines to block wind and sand; a total of 140 kilometers of them were wiped out by the tsunami. The Forestry Agency plans to replant them.

In Sendai, the trees will stand on top of 10-foot-high earthen banks. The dirt for the banks is being trucked in from nearby mountains and mounded on top of native plants that survived the tsunami or grew back afterwards, Hirabuki says. The Forestry Agency says the banks are necessary for ensuring tree health where the water table is high. But Hirabuki worries that a vital source of seeds for regenerating more heavily damaged parts of the shoreline is being destroyed. 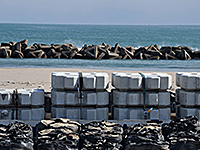 Construction materials for a seawall near the Gamo tidal flats in Miyagi Prefecture. WINIFRED BIRD

The pace of the reconstruction has left little time to consider alternative options, however: The bulk of subsidies from the national government have a five-year expiration date. Displaced disaster survivors are also divided over how to rebuild. “What’s hard is that people want to get their old life back, but that comes as a set with building these huge seawalls,” Yokoyama says.

Even when communities decide to move en masse to higher land, problems remain. In oyster farmer Hatakeyama’s fishing hamlet, for instance, the fact that all 30 households decided to relocate did not affect plans for a three-story-tall seawall. It was only after Hatakeyama — whose father is one of Miyagi’s most famous environmental activists — spearheaded a petition campaign that the plans were cancelled.

“I think [the tsunami brought Japan’s] 400-year pattern of ever-expanding coastal development to an end on an intellectual level,” she said. “But the change isn’t immediate. The extreme irony of the situation is that it probably won’t influence what happens with seawall construction in northeastern Japan in the next three years.”

For the region’s natural environment, the cost of that delay could be high.