I am hiking through a moss-draped forest more than 10,000 feet above sea level in the Rwenzori Mountains in western Uganda, not far from the border of the Democratic Republic of the Congo. The trail ahead is steep as a ladder and slippery with mud, and every few minutes my guide and I stop to rest.

Most people who come to this part of Africa do so for its wildlife, especially the endangered mountain gorilla. I have made the journey for another reason. I am looking for a glacier.

In the popular imagination, glaciers and Africa intersect at one location: Mt. Kilimanjaro, the iconic dormant volcano that rises from the grasslands of Tanzania and whose shrinking snowcap has become a symbol of climate change.

But there are glaciers in steamy Uganda, too, hidden in the eaves of jagged 16,000-foot peaks that are lost in the clouds most of the year. And these 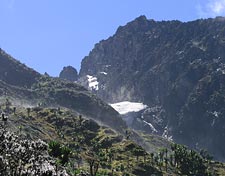 Photo by Tom Knudson
The glacier atop 16,080-foot Mount Speke in Uganda’s Rwenzori Range covered roughly 540 acres a century ago. Today, after decades of warming, only a few dozen acres of the glacier remain.

glaciers have a climate change story to tell, too — one that scientific research suggests better reflects the impact of global warming than the fading snows of Kilimanjaro.

But their story is also nearing its close. In just two decades, scientists expect the Rwenzori glaciers — as well as Africa’s few other remaining ice fields — to be gone. Kilimanjaro has already lost 84 percent of its ice since 1912, and what’s left is not expected to last more than a couple of decades. The Lewis glacier on Mount Kenya is also expected to wink out soon.

That prognosis comes as no surprise to my guide, a local Bakonjo tribesman named Baluku Josephat, who has guided climbers through the Rwenzori range since 1982 and has seen the consequences of global warming firsthand.

“If you go to Mount Baker,” he says, referring to a massive, ship-like peak in the center of the range where glaciers have already melted, “you can now go without crampons. It was not that way in the past. Now people just walk over rocks.”

And not all of the impacts are playing out in the snow zone. Two years ago, Josephat spotted something in a brushy thicket at 10,900 feet that startled him — an upwardly mobile chameleon.

“Chameleons are supposed to be at lower elevations. Now they are moving up and up,” he said, echoing an observation scientists have made about animals and plants in other mountain ranges worldwide. “When I found that chameleon, I was puzzled. I thought, ‘My God, what is happening?’”

The most astonishing sight of all is the snow hovering above the tropical landscape.

With its snow-capped peaks looming over the tropics, the Rwenzori are a geographical marvel that has haunted the Western imagination for centuries. As early as 500 B.C. the Greek dramatist Aeschylus wrote about “Egypt nurtured by the snows.” In 150 A.D., Claudius Ptolemy, the most distinguished geographer of his time, produced a celebrated early map of Africa that fanned speculation about a snowy source of the Nile. Without ever setting foot in Africa, he sketched an icy range rising from the heart of the continent that he called Lunae Montes — the Mountains of the Moon — a name widely used for the Rwenzori today.

But it wasn’t until 1888 that the American explorer Henry Stanley proved Ptolemy correct. Looking up from a camp in the Congo, he spotted what he first thought was a silver cloud in the shape of a mountain.

“Following its form downward, I became struck with the deep blue-black color of its base,” Stanley wrote. “Then I became for the first time conscious that what I gazed upon was not the semblance of a vast mountain, but the solid substance of a real one with its summit covered with snow.”

Even today, hiking into the Rwenzori range is like stepping into a lost world. Fewer than 2,000 people a year visit the place. For long stretches, you see no one. And there are surprises by the hour, from worms as long as your walking stick, to iridescent greenish-purple sunbirds and the elusive, brilliant-blue Rwenzori turaco. 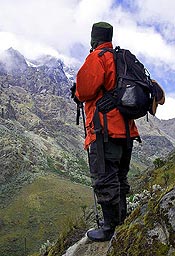 Photo by Tom Knudson
A mountaineering guide stands near the former terminus of the Speke Glacier, which once snaked down the side of Mount Speke for 1,600 feet.

Also astonishing is the kaleidoscope of chlorophyll, the staircase of forest zones that clings to the range from the foothills at 5,400 feet to the treeline around 13,500 feet. On our second day, we entered a forest of giant heather so ensnarled in moss it was hard to see the sky. “No forest can be grimmer and stranger than this,” wrote Filippo de Filippi in his epic account of the first expedition to thoroughly explore the range and climb its major peaks, led by the Italian mountaineer and adventurer, Prince Luigi Amedeo of Savoy, Duke of the Abruzzi, in 1906.

As we climbed higher, the heather disappeared, replaced at 11,200 feet with something stranger: two species that looked like cactus, but weren’t — the torch-like giant lobelia and the giant groundsel, which reaches upward with woody branches topped by enormous cabbage-like leaves.

But the most astonishing sight of all is the snow you begin to glimpse hovering above the tropical landscape. When Abruzzi tramped through the range a century ago, ridges and mountains were shellacked with snow and glaciers. He discovered glaciers on six peaks and estimated their total size at 2.5 square miles.

“Members were full of excitement and satisfaction,” wrote de Filippi, describing the expedition’s initial ascent into the alpine zone. “The place was rough and wild. A cold and biting wind blew off the glacier and suggested surroundings very different from those usually associated with Equatorial Africa.”

Today, less than half a square mile remains. On three peaks, glaciers have disappeared altogether.

Ice is disappearing so swiftly that much critical scientific information may already have been lost.

In the Andes and Himalaya, the melting of high-altitude glaciers is expected to trigger water shortages downstream in coming decades. But Uganda’s ice is much too small to have such an impact. Nonetheless, Josephat and his fellow tribe members are worried. For them, melting glaciers are an economic threat.

“The snow and ice you are seeing are a tourist attraction,” said our cook, Donald Philly, over dinner one evening. “Clients come to see the snow and we get employment opportunities.”
And when the snow is gone, he added, jobs will vanish. Standing nearby, Josephat said the Bakonjo would simply have to adapt — like the chameleons. “We are going to train our guides on rock climbing,” he said.

“Years ago, it would rain cats and dogs, from morning to evening, for seven days straight,” Josephat said. “Rivers were flooded. There would be a lot of fog, even down to the lower elevations. These days, that is not happening.”

Such changes, he believes, are contributing to a rise in mortality he has observed among the iconic giant lobelia. “The trees are withering at a rapid speed,” Josephat said. And as they die, he said, other plant and moss species are likely to suffer, too.

Ultimately, Josephat said, he fears climate change may set off a domino effect of forest decline that could one day diminish the range’s ability to soak up and store water, putting downstream villages at risk. The Bakonjo guides take the threat so seriously they have recently formed an organization to plant more trees around the base of the range, both to battle deforestation and increase carbon sequestration. 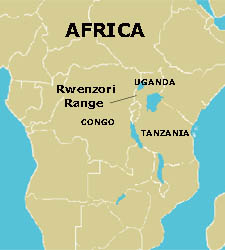 Yale Environment 360
The Rwenzori Mountains are located in western Uganda, not far from the border of the Democratic Republic of the Congo.

The changes here also pose a challenge to climate scientists. Inside the Rwenzori’s receding glaciers are specks of pollen and dust that could unlock secrets about past climatic upheavals. But there’s a problem: no one has managed to access to the glaciers amid the daunting terrain. Seven years ago, Lonnie Thompson — the well-known U.S. scientist who has sampled high-altitude tropical glaciers worldwide and uncovered evidence of dramatic pre-Incan climate swings from ice core samples high in the Andes — was scheduled to work in the Rwenzori. But he had to cancel his trip because of security concerns in East Africa at the start of the Iraq war.

“The whole atmosphere is warming in the tropics,” Thompson told Science News. “But the greatest risk is taking place at the highest elevations — on the order of 0.3 C (0.5 F) per decade.”

Ice in the Rwenzori is disappearing so swiftly that much critical information may have already been lost. “There is a lot of concern about whether there is even a viable [ice] core,” said Richard Taylor, a hydrologist at University College in London. Without such solid evidence, he added, scientists can’t even determine the age of the range’s glacial cover.

Taylor is the lead author of a 2006 study in Geophysical Research Letters that links the melting glaciers in the Rwenzori more directly to rising temperatures than the shrinking snowcap on 19,340-foot Mount Kilimanjaro.

“The ice fields on Kilimanjaro are substantially higher” than the Rwenzori and therefore less prone to melting, Taylor told me by phone from London. “The glaciers that still exist in the Rwenzori reside somewhere between 4,800 meters and 5,050 meters” — 15,750 to 16,570 feet — making them “more vulnerable to fluctuations in temperature.”

By contrast, the shrinking snowcap on Kilimanjaro is likely due to decreasing humidity, not rising temperatures, he said, adding, “The Rwenzori mountains are the icon of global warming — not Kilimanjaro.”

But as I climb higher into the Rwenzori, it’s clear that getting close to even one African glacier is going to be more of an ordeal than I expected. And it’s not just the steep trails and thin air that conspire to halt my progress. It’s the mud. Never have I seen mud in such quantity or variety. Sludge-like in places, syrupy in others, it filled two enormous high-altitude bogs. In spots, a boardwalk helped. But where it ended, chest waders would have come in handy, too.

Finally, after scrambling up a nearly vertical wall of rock and moss, I stepped onto a ledge at 14,400 feet, where a century ago Abruzzi encountered a nine-story-high wall of ice known as the Speke glacier, named for the British explorer — John Hanning Speke — who discovered the source of the Nile at Lake Victoria.

In Abruzzi’s day, the glacier snaked down the side of 16,080-foot Mount Speke for 1,600 feet before ending abruptly near the rocky cliff face where he — and now I — stood. A century ago, the glacier covered about 540 acres, and de Filippi recounts listening to the roar of gigantic columns of ice crashing into the valley below.

In the thickening mist, I searched for ice but saw none. Instead, I looked out on the ghost of a glacier, a rubble of smooth slate-gray stone sloping up from a small green lake, formed by glacial melt. Here and there, giant groundsels were starting to grow between rocks that not long ago were entombed in ice.

Then the sky opened up to reveal a narrow band of silver and white more than 1,000 feet up the mountain — the last receding remnant of the Speke glacier, which has now shrunk to just a few dozen acres.

A few seconds later, the clouds zippered back up and it was gone.