As day breaks, T. Wright Dickinson hauls 40 cows in a big-rig truck across the sagebrush country of Vermillion Basin, a high desert covering northwestern Colorado and parts of Wyoming and Utah. Dickinson’s family ranch dates back to 1885 and comprises much of the 77,000-acre basin, a checkerboard of privately owned and leased state and federal lands. 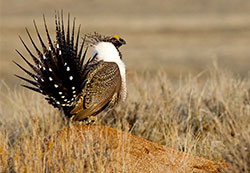 On this unseasonably warm late-winter day, Dickinson, 53, is moving cattle from winter to summer pastures before they begin calving. Along the way, he passes groups of pronghorn and mule deer, oil pumpjacks and gas wells, and miles of rolling hills and rising mountains covered in rock, brush, and juniper trees.

Cows aren’t the only animals on the move this time of year. Greater sage grouse gather in open patches of sagebrush, known as leks, where the male birds perform their noisy strutting display to attract female mates. Afterward, the birds disperse into nearby wetter meadows to nest and hatch their chicks. In winter, the birds find sheltered draws where they survive eating sagebrush leaves.

Greater sage grouse follow that annual routine in 11 Western states on more than 78 million acres. But the species has declined by 45 to 80 percent in recent decades due to sagebrush loss and fragmentation caused by overgrazing, subdivision and sprawl, booming energy development, and other factors, such as predation and disease. The U.S. Fish and Wildlife Service is now considering the grouse to be listed under the Endangered Species Act. Such a move could hinder ranching, oil and gas drilling, and wind and solar energy across the American West, potentially costing up to $5.6 billion in annual economic activity and up to $262 million in annual state and local revenue.

Putting the grouse on the endangered list could cost $5 billion in annual economic activity.

Dickinson isn’t interested in federal mandates. Instead, he is backing a novel approach to conservation through a so-called “sagebrush marketplace.” The Colorado Habitat Exchange aims to help sage grouse by allowing energy companies and developers that unavoidably fragment or degrade grouse habitat to purchase “credits” from landowners, such as Dickinson, to mitigate, or offset, their impacts. In return, the landowners agree to protect and restore critical wintering, breeding, and nesting grounds for the bird.

The restoration projects could include removing juniper trees that overtake sagebrush, fencing areas to reduce deer browsing on new sage, thinning out vegetation where it’s drying up meadows, and using prescribed fires to create habitat. Similar initiatives are also unfolding in Wyoming and Nevada and a handful of other states, with backing from the Environmental Defense Fund and others. Dickinson’s ranchlands will be serving as testing grounds for the market this summer, so the program’s science team can refine and calibrate its measurements of habitat impacts and benefits — “debits” and “credits.”

“You can quantify the impacts that an oil well or windmill project is going to have on wildlife and then go to a different site and create what we call uplift, or some conservation benefit that is greater than the impact,” says Eric Holst, senior director of Environmental Defense Fund’s Working Lands program. Holst says development must first avoid and then minimize impacts to wildlife. Compensatory mitigation is a key third leg to the conservation stool where habitat exchanges can play a role. “We’re interested in making sure that states and the federal governments require full mitigation for impacts to sage grouse, and we’re hoping it’s embedded in state and federal management plans,” says Holst.

Dickinson and other rural landowners have their own hopes: that the exchange, by putting a price tag on sagebrush habitat, can help keep the sage grouse off the endangered species list, while providing ranchers with supplemental income for good land stewardship. “The exchange is creating a unit of measure for sage grouse, no different than my carrying capacity for cows,” Dickinson says. “Contracts are a methodology that landowners and industry understand.”

The habitat exchange is what’s known as a “payment for ecosystem services” program, a market-based approach to conservation that continues to gain worldwide traction. Ecosystem services are benefits we accrue from bees that pollinate flowers, wetlands that filter water, trees that capture carbon, and sagebrush that sustains wildlife — processes that go virtually unvalued on balance sheets. Ecological economist Robert Costanza and colleagues have estimated worldwide ecosystem services to be worth $125 trillion a year. 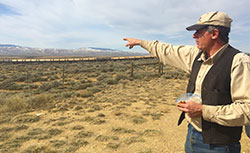 Carbon credit systems, such as the United Nations’ REDD (Reducing Emissions from Deforestation and Forest Degradation) program, are perhaps the best-known initiatives. Under REDD projects, emitters of carbon, such as power plants, buy credits that pay others to halt deforestation, plant new trees, or develop renewable energy, all of which capture or reduce carbon emissions. Implementation of REDD projects has been slower than many proponents would like; but local demonstration projects are happening and the program remains a key component of international climate talks. In Costa Rica, for example, a program that compensates landowners for not logging has more than doubled the country’s forest cover since the 1980s, benefiting rivers and wildlife and providing income for families.

In the U.S., ecosystems markets have so far generated more interest than results, with several efforts in early stages. In Oregon, the Willamette Partnership and Freshwater Trust, both nonprofit conservation groups, have developed a water-quality trading program to mitigate impacts to rivers and fish. For example, the city of Medford’s wastewater treatment plant releases warm flows into the Rogue River to the detriment of Chinook salmon and other species. Instead of installing $16 million of equipment to upgrade the facility to meet state standards, the city is purchasing credits that pay private landowners to plant native trees that shade the Rogue and mitigate the warm temperatures. The program will cost just $8 million and rehabilitate 30 river miles. The partnership has developed standards and protocols to quantify the environmental effects, and is leading its own sage grouse habitat market in the state.

On the Fort Hood Military Reservation in Texas, the Army participates in the Recovery Credit System to offset the impacts of training exercises on endangered golden-cheeked warblers, which nest only in Texas, and black-capped vireos. The Army purchases credits from adjacent private landowners, who then carry out conservation projects that benefit the birds. The program, administered by Texas A&M University, allowed the military to offset impacts on 237 acres during a test run, with 20 landowners participating.

The Fort Hood program has served as a blueprint for the Colorado Habitat Exchange and similar programs in states where oil and gas drilling has boomed. But the sagebrush market carries a notable exception: Since greater sage grouse are not yet listed as endangered species, there is no “regulatory hammer” compelling industry to participate. And landowners are uncertain if their involvement will stave off tougher federal land-use restrictions on public and private lands (both important for ranching) if the Fish and Wildlife Service determines that the bird warrants protection.

“Historically, we’ve mitigated after the impacts,” Dickinson says, driving across the Vermillion Basin and pointing out different habitats and places ripe for conservation action. “We need to buffer the impacts before they occur, but we also need regulatory certainty.”

The state of Colorado is on board, and plans to recognize exchange credits as valid mitigation projects that comply with state drilling rules for sensitive wildlife. The exchange will create “a voluntary, financial incentive to do good conservation work, with the market acting as a driver,” says Madeleine West, policy adviser for the Colorado Department of Natural Resources. Other state governments, however, have been more hesitant to require compensatory mitigation.

The oil and gas industry is also part of the working group behind the Colorado exchange. Andrew Casper, regulatory counsel for the Colorado Oil and Gas Association, says the market’s potential to standardize and measure debits and credits is “taking the guesswork” out of mitigation. But companies want to know how the program will assess impacts and ultimately set credit prices, and then how the Fish and Wildlife Service will value the credits. If the agency, now reviewing the program proposal, decides the exchange will have no effect on federal conservation plans, developers buying credits will be scarce.

ALSO FROM YALE e360Electric Power Rights of Way: A New Frontier for Conservation

Often mowed and doused with herbicides, power transmission lines have long been a bane for environmentalists. But that’s changing, as some utilities are starting to manage these areas as valuable corridors for threatened wildlife.READ MORE

Bureaucratic inertia and industry reluctance are significant obstacles for the habitat exchange. The program will also have to demonstrate actual benefits for the sage grouse. Researchers’ evaluation of the Fort Hood program found that the initiative stimulated conservation actions for the endangered birds, but the “biological” effects were “less clear.” One concern regarding mitigation for sage grouse is the species’ strong “site fidelity” to previously used leks even after they’ve been degraded; just because the habitat moves, the birds may not. Considering that ecosystem services contracts often span several decades and imperiled wildlife species do not rebound overnight, the success of the exchange may not be clear for years.

Dickinson argues that managing for sagebrush, as he is doing on his ranch, can benefit cattle and wildlife, and both can coexist with oil and gas wells. Cows feed on grassy pastures, clearing ground for sagebrush growth. The most important summer and winter grouse habitat on his lands are directly linked with energy development and grazing areas. A mosaic of habitats and vegetation ensures livestock and wildlife move across the basin and thrive in different areas.

“Maintaining the landscape requires resetting the clock (of sagebrush growth and regeneration), and we can do it in a way that we get credit and create uplift,” he says. “If you pay me to raise sage chickens (grouse), I’ll do it.”