Trekking through deep mud and sawgrass we find a stinking wallow. The elite rangers, dressed in black despite the tropical heat, mark the site with a GPS unit, measure the mucky puddle’s depth, and move on. This is the first sign of one of the planet’s rarest animals — the Javan rhino. Only 40 or so remain, all in the wild. This patch of rainforest and swamp in Ujung Kulon National Park, on the very tip of West Java in Indonesia, is their last and only refuge.

Until two years ago, that wasn’t the case. A second population of Javan rhinos hung on in Vietnam, a remnant of a species that once ranged widely across Asia. But the Javan rhino in Vietnam was eliminated when poachers gunned down the only individual left in Cat Tien National Park. The poacher got his prize: the rhino’s horn, which in the traditional Chinese medicine market is worth $65,000 per kilogram, more than gold.

The Javan rhino is not alone in its plight. The International Union for Conservation of Nature (IUCN) rates three of the five remaining species of rhino critically endangered, only one step away from extinction. The Javan 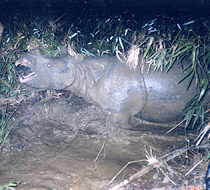 WWF Mekong Project
A Javan rhino in Vietnam, part of a population that is now extinct.
rhino’s closest relative, the Sumatran rhino in Sumatra and Borneo, also has a tenuous hold, with fewer than 275 believed to exist in the wild. Experts put the likelihood for survival of either species at 50 percent.

The outlook in Africa — home to three species of rhinos, totaling 20,000 individuals — is only slightly brighter. Surging horn prices, boosted by booming middle class demand in Vietnam and China, have reinvigorated the mass slaughter of rhinos. South Africa, home to more than 70 percent of the world’s wild rhinos, lost 448 to poachers last year, a new record. Meanwhile the western black rhino, a sub-species of black rhino, was declared extinct in 2011. It, too, eventually succumbed to poaching.

The pressures driving the demise of rhinos are relentless. Over the long term, habitat loss has been the main culprit, but as their numbers have dwindled, threats to individual populations have diverged. In Africa, where rhinos are distributed across vast savannas and often occupy unprotected or poorly protected lands, demand for rhino horn is the primary threat. But in Southeast Asia, where rhinos cling precariously to existence in relatively well-protected rainforest areas, guarded by rangers, lack of suitable habitat and low population densities are the biggest dangers.

The state of Javan rhinos is especially precarious. Their sole habitat is an area of forest that only exists as a consequence of the massive volcanic eruption of Krakatoa in 1883; the resulting ash fallout and tsunami killed everyone living in the area that is now Ujung Kulong National Park. Fear of future eruptions left the area uninhabited, allowing forest to regrow and providing the Javan rhino a refuge on an island that is the most densely populated in Indonesia.

Conservationists are working hard to expand the Javan rhino’s habitat. The International Rhino Foundation is working with its local partner, the Rhino Foundation of Indonesia (YABI), and the national park administration to

Sumatran rhinos are spread so thinly that individuals can’t find one another to mate.

extend protected status to some 3,000 hectares of forest adjacent to the park, which has roughly 38,000 hectares of prime rhino habitat. The goal is to boost the population to 70 to 80 rhinos by 2015, roughly double the current number. The effort will not be easy: Rhinos have to compete with colonists encroaching into the area, clearing forests for agriculture and poaching game with snares that endanger non-target species like rhino.

In 2010 and 2011, the park administration, together with the YABI, successfully convinced 70 farmers to abandon fields planted illegally inside the park and move, with compensation, outside park boundaries. Yet incursions into the park by hunters remain a problem. That’s where YABI’s specially trained rhino patrol units step in.

The units, which coordinate with conservation efforts by the park authority, are specifically tasked with protecting and monitoring Javan rhino populations. Working in teams of four, the rangers spend most of their time on foot in the forest. Last year, the teams came across 563 signs of rhinos — feces, wallows, etc. — but only had one direct sighting. Thanks to the unit’s presence, no rhinos were poached in the park, no rhino snares were detected, and no illegal logging took place. The units are mostly staffed by local villagers who provide YABI with a strong understanding of local needs and a useful network of informants on poaching and other illegal activities. Jobs with YABI are well paid and have become a status symbol in some villages, where employment opportunities are limited. 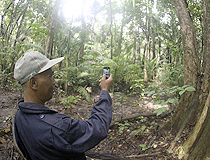 Rhett Butler/Mongabay.com
An anti-poaching ranger in Ujong Kulon National Park in Indonesia marks a Javan rhino feeding site with his GPS.
YABI’s rhino protection manager, Muhammad Waladi Isnan, says that developing nature-based tourism that capitalizes on the region’s white sand beaches and stunning coral reefs would help reduce poaching pressure. But even if Javan rhinos are protected from poaching, their survival is by no means assured. Key rhino habitat in Ujung Kulong is losing out to the invasive arenga palm tree, known locally as langkap, which kills off vegetation that forms an important part of the Javan rhino’s diet. YABI is now working with park authorities to eradicate langkap wherever they find it.

The challenges for the Javan rhino’s closest relative are different. While its habitat has been greatly reduced by deforestation and conversion of native grasslands and swamps for agriculture, the chief problem for the Sumatran rhino is its low population density. The species is spread so thinly across Sumatra and northern Borneo that individuals can’t find one another to mate. So conservationists are taking radical measures to bring potential mates together for semi-captive breeding, including a capture of a wild female last year in Sabah, Malaysian Borneo. That female has now been relocated to an enclosed area of forest that is home to a male Sumatran rhino.

“The days of leaving Sumatran rhinos in natural habitats and guarding them, hoping that they will not be poached and will breed, are passed,” said John Payne of Borneo Rhino Alliance, which led last year’s operation. “Very few of the remaining rhinos are likely to be fertile. Some of the fertile ones will have no access to a rhino of the opposite sex, because there are almost no rhinos left.”

The hope is that with good protection, adequate habitat, and facilitated match-making, the Sumatran and Javan rhinos can stage a comeback. It’s happened before. In Nepal, Indian rhino populations rebounded to 534 in recent years, thanks to a combination of strict law enforcement and programs that deliver benefits to people living in and around rhino habitats. Last year, not a single rhino in Nepal was lost to poachers.

Meanwhile, the southern white rhinoceros in South Africa narrowly escaped a brush with extinction and now numbers more than 17,000 in the wild. But

‘There are too few rhinos left to survive without bold human intervention,’ says one expert.

despite such success stories, challenges to rhino conservation remain sobering, as evidenced by the sharp uptick in poaching of rhinos in South Africa. One of the biggest obstacles to saving rhinos is the high price for rhino horn, demand for which primarily comes from the market for traditional Chinese medicine, where horn is believed to cure cancer and other ills. Part of the problem is that scarcity — due both to the rarity of rhinos and a ban on legal trade — has driven up the price of horn.

Michael ‘t Sas-Rolfes, a South Africa-based conservation economist and consultant and an expert on the rhino horn trade, believes that a well regulated trade in rhino horn “harvested” from captive rhinos (without killing them) could help depress prices and therefore reduce pressure on wild rhinos. “When retail prices are rising we can typically expect poaching activity to increase,” he writes in an analysis published on his web site, rhino-economics.com. “Similarly, falling retail prices should result in reduced poaching activity.”

But the idea of a legal market in horn is anathema to many conservationists.

“What a ‘legalized’ trade amounts to is encouraging sick people to consume rhino horn instead of seeking medical attention, so that certain parties may profit,” said Rhishja Cota-Larson of Saving Rhinos, a group that works to stop the trade in rhino parts. “Since rhino horn dealers and traders are now marketing it as a cancer cure, this presents a serious ethical issue.”

Against the Odds: Saving
Rhinos in a Troubled Land

For three decades, Raoul du Toit has led the fight to protect black rhinos in Zimbabwe, a struggle that earned him a Goldman Environmental Prize in 2011. In an interview with Yale e360, he talked about the challenge of saving this iconic African animal in the face of his country’s economic collapse and a new wave of poaching.
READ MORE
Cota-Larson fears a legal trade in rhino horn wouldn’t stop wild rhino poaching. She believes raising awareness in China and Vietnam is the long-term solution to addressing the rhino horn trade.

But Sas-Rolfes doubts that awareness-raising will ever win over all those who currently use rhino horn, especially when the practice dates back thousands of years and is strongly rooted in cultural beliefs. “Whether rhino horn can be scientifically proven to work as medicine is most likely irrelevant to those who use it,” he writes.

Whether the Javan rhino and other sub-species are part of our future almost certainly now depends on actively creating conditions for their survival. Says Payne of the Borneo Rhino Alliance, “There are too few left to survive without bold human intervention.” Â Â Â Â Â Â