Flying over the Indonesian half of the island of New Guinea, rainforest stretches like a sea of green, broken only by rugged mountain ranges and winding rivers. The verdant canopy shows little sign of human influence. But as you near Jayapura, the provincial capital of Papua, the tree cover becomes patchier — a sign of logging — and red scars from mining appear before giving way to the monotonous dark green of oil palm plantations and, finally, grasslands and urban areas.

The scene is not unique to Indonesian New Guinea; it has been repeated across the world’s largest archipelago for decades, partly a consequence of agricultural expansion by small farmers, but increasingly a product of the logging, oil palm, and mining industries. Papua, in fact, is Indonesia’s last frontier and therefore represents two divergent options for the country’s development path: continued deforestation, or a shift toward a fundamentally different and unproven model based on greater transparency and careful stewardship of forest resources. 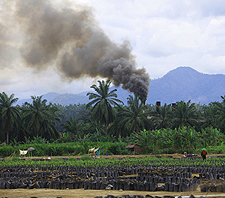 Embarking on the latter path would be a shock to anyone observing trends in Indonesia over the past 20 years. Intense logging, furious expansion of oil palm and pulp and paper plantations, and forest fires have recently led Indonesia to move past Brazil to become the world’s largest deforester. Indonesia’s forest cover has fallen to less than half of its land mass; fires regularly char vast areas in Sumatra and Kalimantan, triggering domestic health woes and hostilities with neighbors over air pollution; and the country is now generally acknowledged to be the world’s third-largest emitter of greenhouse gases, behind China and the U.S.

This deforestation binge has been abetted by rampant and systemic corruption in the Indonesian government, military, and forestry sector. So, against this backdrop, it is understandable why conservationists, scientists, and leaders of indigenous tribes in Indonesia were simultaneously encouraged and skeptical when Norway — which has become the global champion for rainforest conservation — pledged in May to contribute $1 billion to a fund designed to slow the loss of Indonesia’s forests and reduce its carbon emissions. With other nations now also planning to contribute to the fund, the key question is whether the participation of the world community can stem the tide of graft and uncontrolled logging that has steadily decimated one of the world’s largest areas of tropical forest.

The chief mechanism for slowing deforestation is known as REDD — Reducing Emissions from Deforestation and Forest Degradation — which would effectively pay Indonesia to preserve many of its remaining forests.

Reducing deforestation in Indonesia will require taking on vested interests and tackling corruption.

“That’s the problem with REDD,” said Marcus Colchester, who runs the Forest Peoples’ Program, an indigenous rights’ group. “Supporters call it ‘low-hanging fruit.’ We could save a lot of carbon by just stopping deforestation, but what that really means is confronting these vested interests that do very well by deforestation. So REDD ends up being very high fruit. Governments are very reluctant to take the underlying policy reforms to actually reduce deforestation.”

In 2009, President Susilo Bambang Yudhoyono surprised the world when he announced that Indonesia, with the help of rich nations, would voluntarily reduce greenhouse gas emissions — more than three-quarters of which result from deforestation — by 41 percent from a projected 2020 baseline. Earlier this year, Norway and Indonesia reached agreement on a forest protection plan that stresses transparency.

But the devil is in the details: Reducing deforestation in Indonesia will be enormously difficult. It will require taking on entrenched interests; determining who controls what rights to land; tackling corruption; redirecting misplaced incentives that drive deforestation, including subsidies for wood-pulp production and a concession system that penalizes concession-holders who seek to protect forests; establishing systems for monitoring, reporting, and verifying emissions reductions; filling information gaps about the extent and ownership of forests; and reorienting the philosophy underlying the use of the nation’s forests.

Concerns about whether programs such as REDD can work in Indonesia are rooted in the history of graft in the forestry sector. Under former President Suharto, who ruled the country with an iron fist from 1967 to 1998, the forest sector was used as a mechanism for distributing wealth and power to political cronies, rather than maximizing benefits for the people of Indonesia. “It’s a source of unlimited corruption,” Chandra M. Hamzah, deputy chairman at the Corruption Eradication Commission established by President Yudhoyono, told Reuters.

Experts warn that REDD money may be used to subsidize an expansion of processing capacity for palm oil and wood pulp.

The extent of corruption is exemplified by the country’s reforestation fund, which lost $5.2 billion from 1993 to 1997 through mismanagement and fraud, according to an audit by Ernst and Young. Chris Barr, formerly a policy analyst at the Center for International Forestry Research and now an independent consultant, says the ministry’s record of handling large sums of money should set off alarm bells for countries contributing REDD funds to Indonesia. Barr says the problems have continued well beyond the Suharto era, with several hundred million dollars from the reforestation fund being transferred to a highly opaque financial intermediary administered by the Ministry of Forestry, which was supposed to oversee development of timber plantations on previously logged land.

“The ministry has budgeted these funds to finance several million hectares of new plantation development, but there has been little public accounting for how the money has actually been used,” said Barr. He added that “many of the agencies likely to manage REDD funds are already struggling to administer the existing flow of fiscal resources from the reforestation fund.”

Corruption has even touched the team that negotiated the REDD deal with Norway. In October, Wandojo Siswanto, a top negotiator at last year’s climate talks in Copenhagen, was arrested in Indonesia and charged with taking a bribe of about $10,000 in exchange for arranging a favorable contract in the Ministry of Forestry for a telecommunications company. Siswanto had been named in two earlier corruption probes, including a 2008 incident in which he admitted to accepting a $4,600 kickback from a lawmaker.

Corruption is only one of the concerns that conservationists and outside donors have about forest preservation schemes. Barr warns that the REDD money may be used to subsidize business-as-usual approaches, including a huge expansion of processing capacity for palm oil and pulp and paper, which could increase pressure on remaining forest areas. He noted that the low-carbon growth strategy for East Kalimantan aims to reduce carbon emissions while also expanding capacity of the province’s pulp industry four-fold.

Indonesia has announced a two-year moratorium on developing new concessions in virgin forest areas and peatlands, although that decree will not apply to concessions granted prior to January 2011. A key aspect of REDD projects would be to preserve undeveloped forests and peatlands by paying landholders to instead develop degraded, once-forested lands into timber or oil palm plantations.

But the issue of developing degraded lands is fraught with problems. They are either too expensive to be developed (profits from logging often subsidize plantation projects) or plagued by land rights issues, making them unattractive to industry. Land tenure problems stem from officials in Jakarta not actually knowing what land is being used. In many cases, “wasteland” isn’t abandoned, but utilized by communities for small-scale activities, including subsistence agriculture and agroforestry. A company may win the right to develop an ostensibly abandoned concession only to find that the area is occupied. Getting a handle on degraded lands is thus one of the top priorities in the first phase of the Norway deal. A degraded-lands database will track where degraded lands exist and who owns, or at least uses, them.

For REDD to work, transparency is critical in the verification of which areas are, and are not, being logged.

For REDD programs to work, such transparency is critical in two other areas — the flow of donor money, and verification of which areas are, and are not, being logged. Groups like the World Resources Institute and Forest Trends are working with local partners on financial tracking mechanisms for REDD money. And since Norway will pay Indonesia based on its success in reducing CO2 emissions, the two countries will create by 2014 an independent international verification body to monitor deforestation. This will likely rely heavily on satellite and remote sensing technologies similar to those used for tracking deforestation in the Brazilian Amazon.

One area where REDD money might be most effective is in encouraging better forest management practices in virgin forest. McKinsey & Company estimates that sustainable forest management could reduce annual emissions in Indonesia by 200 million tons of CO2, compared to standard harvesting techniques.

Chip Fay, a former senior policy analyst for the World Agroforestry Centre and currently a fellow at the Samdhana Institute, a think tank, says that finding ways for local government and residents to benefit economically from REDD is crucial to its success. “What the international community presents is a bit of smoke-and-mirrors, whereas a plantation company can put something real on the table — something that is easy to understand and exists today,” he said.

Added Agus Purnomo, a member of the Indonesian president’s Special Staff on Climate Change, “Since we are serious with our commitment… we have to ensure that those who are working to reduce deforestation and peatland degradation will be properly compensated… We will use such additional revenue to not only support activities in forest areas but also to build more schools, better hospitals, basic infrastructure, and to address other drivers of deforestation.”

Erik Meijaard, a former ecologist with the Nature Conservancy and now an independent consultant, said that ultimately business has a more important role to play than the conservation community.

“I don’t know whether business will be brought around, but it is the best and probably only realistic hope,” he said, noting that researchers and the government have both highlighted “severe” problems in managing protected areas, such as illegal logging. “No other sector is in a position to reduce deforestation through active management and protection of forest assets. Government has rarely shown an ability or commitment to managing forest assets, either protected or unprotected.”

One of the biggest players in the Indonesian forestry sector has said it welcomes the upcoming two-year logging moratorium. “I think it is really good to have a break,” Aida Greenbury, sustainability manager for Asia Pulp & Paper — a firm much maligned by environmentalists for its logging practices — told Voice of America. “We have been under enormous criticism from all over the world. So let us just stop everything, tell us where did we do wrong, and let us analyze it, see where we can improve… and then come up with a new set of regulations.”

At the very least, Norway’s $1-billion pledge has shown that the concept of compensated forest protection is indeed real and is now attracting some of Indonesia’s best thinkers to the issue of deforestation, which had been a low priority on the national agenda for too long. But even a billion dollars will only go so far. Erik Solheim, Norway’s Minister of Environment and International Development, says other rich countries need to support Indonesia’s international commitment to preserve its forests and thereby help fight climate change — support that some developed nations may be reluctant to give until they are confident the money will not be squandered.

“Indonesia has unilaterally committed to achieve great things and the response of the international community to this cannot be business as usual,” said Solheim. “It must involve support at a scale which matches the changes Indonesia is willing to implement.”