When the U.S. government announced in August that it planned to provide special protections for 20 varieties of coral under the Endangered Species Act, marine biologist Ayana Elizabeth Johnson suggested the move was not nearly enough. To her mind, the government’s justification for the protections — which hinged on the impacts of climate change and ocean acidification — overlooked much more immediate threats to these ecologically and economically vital corals: overfishing, pollution, and coastal development.

Aggressively curbing these, Johnson said, is something that can be done by coastal communities immediately — and with dramatic results.

As the executive director of the Waitt Institute, an ocean conservation organization based in La Jolla, California, Johnson recently put that approach to the test on the Caribbean island of Barbuda, near Antigua. Working with the government and local residents, the Waitt Institute’s Blue Halo Initiative helped to establish a comprehensive zoning system in Barbuda’s waters that was designed to halt overfishing and establish marine sanctuaries. In an interview with Yale Environment 360 web editor Crystal Gammon, Johnson discussed how she helped Barbuda to craft these rules, which were signed into law in August, and why she favors community-driven conservation efforts over more top-down approaches.

“We now have the data to prove that if you manage your resources really well locally, you have a much better chance of surviving the things you can’t control,” she said, “whether that’s climate change or storms or whatever it might be.”

Yale Environment 360: Why is it a bad idea to focus on reef and ocean conservation through the lens of climate change?

Ayana Elizabeth Johnson: It’s only part of the picture. The challenge is that we have overfishing, pollution, and coastal development operating alongside climate change, which has impacts that are often hard for people to get their heads around. Small islands in the Caribbean, for example, can’t stop climate change. But there are a lot of things they can do to build resilience in their ecosystems until international bodies and large governments rein in their carbon emissions. So the point is not to give up because there’s something big and out of your control, but to do what you can locally to make a difference. We now have the data to prove that if you manage your resources really well locally, you have a much better chance of surviving the things you can’t control, whether that’s climate change or storms or whatever it might be. And reefs that are managed well are not just a little bit healthier, they’re many times healthier.

“Reefs that are managed well are not just a little bit healthier, they’re many times healthier.”

e360: So are you in favor of an all-of-the-above approach to ocean conservation — management plus climate change mitigation?

Johnson: Right. It’s not either protect parrotfish or work to prevent climate change. That would be a totally false dichotomy. We’re just saying, “Why not focus on what we can do?” We’re not saying, “Don’t worry about the rest.”

e360: What are some examples of places that have had success with a local approach to fisheries management?

Johnson: Bermuda was the first place to prevent the use of fish traps, which in turn ended up protecting parrotfish, which in turn meant that there was less algae on the reefs and that the reefs have been able to kind of hold steady despite everything else that’s going on. Another example is Bonaire, whose economy is dependent on scuba diving tourism. They have put a number of measures in place to set up some protected areas and prevent really destructive fishing. Barbuda, of course, is the one closest to my heart. We’ve partnered with their government to do some really comprehensive thinking about what they want their ocean to look like in the future and how we can help them get there.

e360: How did the partnership with Barbuda arise?

Johnson: I started meeting with people in several Caribbean nations — fishermen, prime ministers, natural resource managers, hoteliers — so I could understand their priorities, their concerns, and whether they actually wanted to see things change. Barbuda just felt like the right fit. It’s small — 15 or 16 hundred people — and the people know how dependent they are on healthy oceans for their fisheries, which are a large portion of their economy and a huge draw for tourism. They wanted to figure out a way to manage their fisheries better, but they didn’t have access to a lot of the technical components for doing that — teams of marine biologists to assess their reefs, experts to help make maps, or assistance with the legal drafting.

“All the boundaries on Barbuda’s final zoning map were drawn by members of the community.”

It was very interesting that everyone I spoke to in Barbuda wanted to see a change. No one was happy with the way things were. I don’t have time to spend a year convincing fishermen that their catches are getting worse and their reefs aren’t healthy. So we look for partners that come in with the mentality of “we want to fix it, we have the will, and you guys have the tools, and let’s team up.”

e360: What’s been the outcome, so far, of your work with Barbuda?

Johnson: It’s been two years since I first set foot on the island. After about a year and a half of public consultation, Barbuda put zoning and other types of legal policies in place. All the boundaries on the final zoning map were drawn by members of the community. None of them were drawn by scientists or anybody else — not even the politicians. 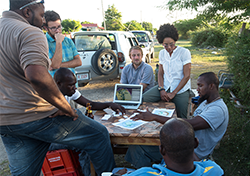 The Barbuda government has jurisdiction up to 3.5 miles from shore, and now one-third of their coastal areas have been designated as sanctuary zones where no fishing will occur. The zoning map also establishes anchoring areas, as well as areas where no nets are to be used. The no-net zones are a great symbol to me, because it’s the fishermen who asked for that. They said, “We’re concerned about the sustainability of that practice and we’d like to see it end.” So now there’s a regulation that says nets cannot be used within 20 meters of a coral reef. It’s not a matter of convincing fishermen of basic ecological principles — they obviously know that habitat quality is important to fisheries’ health. It’s just a matter of figuring out how to provide the tools to legally codify their existing knowledge and preferences.

Johnson: One example is the Codrington lagoon. It’s been fished very heavily, and there’s a pier right in town where kids would drop a line after school and go fishing. The draft regulations at one point had closed the lagoon to all fishing for two years. But I was sitting on the dock one day watching these eight-year-olds fish, not catching much, and I thought, “Well, how terrible would it be if these kids couldn’t drop a line off the pier after school? They’re not the ones causing the fisheries to collapse, right?” So when the regulation became final, it contained an exception that says no fishing in the lagoon for two years, except with a hook and line from shore.

“What the public supports is often much more progressive than what politicians feel comfortable doing.”

The other example is sharks. We had proposed a ban on catching sharks, and the community reaction was, “but we don’t even catch that many sharks.” What they really meant is, this is a part of our tradition, and our use is not a big problem, but we want to make sure that outsiders aren’t also catching sharks. So the final outcome was to ban the export of sharks, and say sharks could only be caught for local consumption. That preserves an aspect of their culture.

I think trying to be flexible and creative is what ended up making the laws actually get passed. I recently compared the Waitt Institute’s original policy recommendations with the final regulations. They’re hugely different. They tackle the same issues but they’ve evolved dramatically, and that’s a great thing because it shows that community feedback really was incorporated.

e360: On what time scale do you think Barbuda will start seeing success, either in the fisheries or the community as a whole?

Johnson: It depends on how you’re measuring success. For people who measure success in the number of fish or the amount of coral, that’s going to take time, because coral grows about one centimeter a year, and fish take years to reproduce. Lobsters, which are Barbuda’s primary export, don’t reproduce until they’re about three years old. There’s definitely going to be a lag, but I think we’re going to start seeing some ecological benefits within about three years. But if we’re able to cut the amount of illegal fishing in Barbuda’s waters, then fishermen will start to see benefits even sooner. That will depend on enforcement, of course, not just having the laws on paper.

If you’re measuring success in dollars, in economic factors such as ecotourism, that kind of stuff might take a little longer.

ALSO FROM YALE e360People or Parks: The Human Factor in Protecting Wildlife

Recent studies in Asia and Australia found that community-managed areas can sometimes do better than traditional parks at preserving habitat and biodiversity. When it comes to conservation, maybe local people are not the problem, but the solution.READ MORE

So whether it’s dollars or fish, I think it’ll take a few years.

e360: Based on your work in Barbuda, do you see any implications for more developed and regulated areas such as Florida or Australia?

Johnson: At the most general level, yes, the Waitt Institute’s “you have the will, we have the tools” approach could work anywhere. We think that zoning and protected areas should be part of it, fisheries management should be part of it, but exactly what form it takes completely depends on the priorities of the location. What’s really preventing Florida and Australia from protecting their coral reefs or rebuilding fisheries that have effectively collapsed is not necessarily money or technical expertise — there are plenty of very smart and capable scientists in both places. In many cases it comes down to political will. What the public supports is often much more progressive than what politicians feel comfortable doing.