In the sleepy northern Thai border town of Huay Luk, a community leader, Pornsawan Boontun, still remembers the day when villagers netted a Mekong giant catfish more than a decade ago. The fish weighed 615 pounds, and it surprised everyone since the elusive species has never been common in this stretch of river.

The giant catfish, among the planet’s largest freshwater fish species, is now rare throughout the entire Mekong River Basin. While overfishing and past practices, such as dynamiting or electroshocking pools in the river, contributed to the species’ decline, a much larger threat now looms for aquatic life and human populations along the Lower Mekong River: dams. 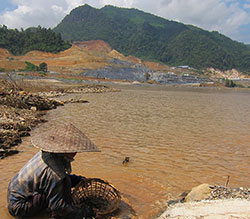 A villager washes in the Mekong, with Xayaburi Dam construction in background. INTERNATIONAL RIVERS

Seven dams built upstream in China and the blasting of rapids to improve navigation have already altered flows, reduced fish populations, and affected communities along portions of the Lower Mekong, which flows through Thailand, Laos, Cambodia, and Vietnam. But the impacts may soon get much worse as a new era of hydroelectric dam-building begins in the Lower Mekong Basin. Eleven major hydroelectric dams — mostly within Laos — and dozens of dams on tributary streams that feed into the Mekong have been proposed or are under construction.

Xayaburi Dam, a few hundred miles downstream from Huay Luk in Laos, has been under construction for more than a year. In Cambodia, construction on the $781 million Lower Sesan 2 Dam, financed by a Chinese utility, is expected to start in the coming weeks. Laos has vowed to begin work on the Don Sahong Dam, downstream of the Xayaburi, which scientists say would cause significant environmental damage due to the dam’s proximity to the Mekong Delta and Cambodia’s Tonle Sap Lake. Pak Beng Dam, another proposed project, would create a stagnant reservoir, raise water levels behind the dam 40 feet, and back up the river near Huay Luk, forcing the resettlement of communities.

The dam-building boom could diminish essential flood pulses and decimate fisheries and gardens.

The full slate of potential Lower Mekong dams would produce nearly 14,700 megawatts of power, boosting Southeast Asia’s energy generating capacity by 25 percent. But the dam development is proceeding over the objections of environmental activists, many community leaders, and the intergovernmental Mekong River Commission, testing the commission’s authority and posing a threat to regional cooperation.

River experts say that if the dam-building boom proceeds as planned, it could diminish essential flood pulses and decimate fisheries and riverside gardens that are dependent on variable flows and sediment. That, in turn, would affect the diets and livelihoods of 40 million people dependent on the Mekong. 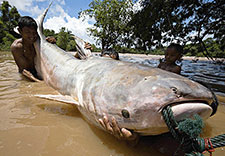 A giant catfish caught near where the Don Sahong Dam would be built in Laos. SUTHEP KRITSANAVARIN/SAVE THE MEKONG

Among the world’s largest and longest rivers, the Mekong flows off the Tibetan Plateau through western China and Myanmar before forming the Thailand-Laos border and eventually flowing to the Mekong Delta and South China Sea. Its 2,700-mile length and highly variable seasonal flows fed by monsoons for half the year also make the Mekong unique and the “greatest inland fishery in the world,” according to Ian Baird, a geographer at the University of Wisconsin who lived and studied in Laos for 15 years.

“The volume of the water that is found in the river in the dry season is about 30 times less than the wet season, so basically it’s not the same river,” Baird says. “Such massive changes in the habitat are one of the reasons why fish are so mobile and migrations are so important, more so than any big river in the world, as far as we understand.”

The pulses also serve as environmental cues to trigger fish movements and spawning, although scientists are still learning about short- and long-distance migration patterns for fish — such as the giant catfish and endangered seven-striped barb — that migrate along the river. The Mekong holds 850 species of fish, 135 of them migratory, and altering the river’s seasonal flows could threaten a wide range of aquatic life, scientists say.

Due to its location near known spawning areas, scientists believe the Xayaburi Dam will create an impassable barrier for the giant catfish and could drive the elusive species to extinction. As the first dam in the lower basin, the impacts will be severe, says James Pittock, a freshwater ecologist at the Australian National University who co-authored a 2012 study concluding that the potential impacts of Mekong dams on fisheries were not being adequately measured in project assessments.

‘Diminishing the food security of people in a developing country is clearly a significant impact,’ says one expert.

Proponents of the $3.5 billion Xayaburi project, including the Lao government and utilities in Thailand that will claim over 95 percent of the electricity, argue that the development will extend power lines into rural areas and fuel industrial growth. Assessments conducted by the Lao government have claimed that environmental impacts will be minimal and that mitigation measures, such as fish passage structures, will enable fish migration. The dam is now 21 percent complete.

But Pittock and other scientists are dubious of the Laotian government claims. “Experts are categorical in saying that fish passage devices have failed on large dams in Asia,” since they are unlikely to meet the needs of the volume of fish and won’t change the dam’s effects on flood pulses, Pittock said in an email. He calls the analysis “irresponsible” for failing to consider how millions of people will replace the protein lost if fish numbers plummet due to blocked migrations and reduced flows.

“Diminishing the food security of people in a developing country is clearly a significant impact,” Pittock says, “and the companies and governments concerned have a moral obligation to explain how this impact will be mitigated.”

Instead, Laos, a landlocked country with a Marxist government and a poor human-rights record, is doubling down. Laos depends heavily on international aid and foreign investment, and officials claim hydropower development will turn the country into the “battery” of Southeast Asia and spur economic growth. Last November, government officials announced plans to build a second major dam, Don Sahong, in southern Laos near the Cambodian border. This dam project could prove even more harmful for the region’s fish — and people — because of its proximity to Tonle Sap, a large freshwater lake in Cambodia that feeds into the Mekong and is the beating heart of the country. As the Mekong floods in the rainy season, the flow to the lake reverses its direction and sends water back to Tonle Sap. This current reversal carries sediment that builds up soil for farming rice and other crops and also enables the migration of breeding fish — including various carp species — that serve as essential food sources.

Critics have struggled to slow down development or sway decision makers.

“In terms of fish migrations, we know that projects that are closer to Tonle Sap Lake are likely to be more devastating because the number of fish species rise [closer to the lake],” says Ame Trandem, Southeast Asia program director with the nonprofit group International Rivers. The dam’s potential placement across an important channel that fish use to pass Khone Falls, the largest cascade on the Mekong, makes the project even more troublesome.

Critics have struggled to slow down development or sway decision makers. The Mekong River Commission is the intergovernmental agency among Thailand, Laos, Cambodia and Vietnam charged with overseeing the lower river’s development and management. Its 2010 strategic environmental assessment noted the potential power generation from the 11 proposed main-stem dams. But it also concluded that the projects could seriously degrade the river’s natural functions and cause a loss of 26 to 42 percent of fish in the river system. The report, which estimated that 100,000 people could be displaced by the dams, ultimately recommended a 10-year moratorium on new dams to conduct further studies.

That advice has been ignored. Under the commission’s rules, Laos submitted the Xayaburi Dam for “prior consultation,” but concerns from neighboring countries, scientists, and environmentalists have been largely disregarded. Laos started construction before completing the consulting process.

Tributary projects, such as the Lower Sesan 2 Dam in Cambodia, require even less regional involvement; countries only have to notify others of their intent before breaking ground. Baird says the tributaries play a vital role in the river’s flood pulses, fish movement, and reproduction.

One dam alone could reduce fish biomass by 9 percent throughout the entire Mekong.

The Lower Sesan 2 Dam is located on an important tributary for migrating fish and is also relatively close to Tonle Sap. A 2012 modeling study projected that Sesan 2 alone could reduce fish biomass by 9.3 percent throughout the entire Mekong Basin, while the full slate of planned tributary dams “would have catastrophic impacts on fish productivity and biodiversity.”

Neighboring countries contested Laos’ attempt to avoid full consultation for the Don Sahong Dam at a Mekong River Commission meeting in January, expressing concerns about its impacts. Those talks will continue this April. Snags in financing or purchase agreements could also slow progress on the new dams. But Laos’ recalcitrance and repression of environmental activists leaves little room for optimism. Sombath Somphone, a leading voice for conservation in Laos, was abducted in December 2012 at a police checkpoint and is still missing.

Around Huay Luk, Pornsawan and other villagers, working with the Thailand-based nonprofit Living River Siam Association, are documenting changes in river habitat and bank erosion due to unusual fluctuations in the river. Studies have linked Chinese dam operations to these changes, as well as to declines in fish catches, destruction of communal riverside gardens, and decreased harvests of kai, or Mekong water weed, an important food source for people and fish.

Academic researchers are attempting to redefine how villagers and governments recognize and define wealth on the Mekong. Apisom Intralawan, an ecologist at Mae Fah Luang University’s Institute for the Study of Natural Resources and Environmental Management in Thailand, says official assessments that only value hydropower and industrial growth are using “a narrow definition of poverty.” Communities may be “poor, but they have water security, which translates into food security, and they have social trust.”

A cost-benefit analysis Apisom coauthored with ecological economist Robert Costanza and others in 2011 concluded that dam-building plans have undervalued affected fisheries and underestimated impacts on wetlands and aquaculture. Instead of creating $33 billion in economic benefits, the Lower Mekong dams would cost the region up to $274 billion in degraded resources, lost ecological services, and other impacts, according to estimates by Apisom and Costanza.

A last, temporary cofferdam is scheduled for placement at Xayaburi in July 2015, marking the full blockage of the river and a point of no return. “At that point, if they allow the dam to go forward, we can expect ecological changes,” says Trandem. “So, really, [we] have one more year to save the Mekong.”