It has been a rough couple of months for the climate science community. Last November someone stole or released over 1,000 e-mails from the University of East Anglia. The e-mails revealed that some scientists were so entrenched in battle with their scientific and political opponents that they lost their perspective, going so far as to suggest improperly influencing the scientific process of peer review and evading legal requirements to disclose their data upon request. Climate science took another hit soon thereafter when it became apparent that the 2007 report of the Intergovernmental Panel on Climate Change (IPCC) contained a number of embarrassing errors and an unacceptable amount of sloppy work, such as its erroneous prediction that Himalayan glaciers would disappear by 2035, rather than in several centuries or more.

The IPCC’s handling of the allegations of errors have compounded its problems. Its chairman, Rajendra Pachauri, responded to the first public questions about the Himalayan glacier error by dismissing the allegations as “voodoo science” and the work of climate skeptics. Later, when the sheer weight of the evidence forced the IPCC to correct the erroneous claim in public, it was further revealed that IPCC authors had been aware of the error but were unable to get it changed prior to the report’s publication and had remained strangely silent about it in the years since.

As if this was not bad enough, Pachauri has faced a range of criticism for directing more than a quarter of a million dollars in consulting and appearance fees over the past several years to the non-profit organization that he directs in India. These payments came from companies and investors with a direct stake in the outcome of climate policy negotiations, including Deutsche Bank, the Asian Development Bank, and the Pegasus investment fund. Pachauri has not helped the image of the IPCC by responding forcefully but unpersuasively, explaining that his many business connections — such as enhanced oil recovery and carbon trading operations — are in the common interest, rendering any sort of conflict of interest policies unnecessary. 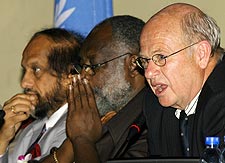 Photo by Saeed Khan/Getty Images
Rajendra Pachauri, left, chairman of the IPCC, along with Orgunlade Davidson, center, and Bert Metz, the co-chairmen of the IPCC Working Group III, at a 2007 press conference in Bangkok.

With all of these troubles facing climate science and the IPCC, some have called for the organization to be reformed or terminated, or at least for its chairman to resign. I have been a strong critic of the IPCC, not least because of its improper treatment of work that I have contributed to on weather-related disasters and climate change. However, I think the IPCC is worth sustaining, but only if it addresses the institutional factors that have led to its recent troubles and a corresponding loss of public trust in the climate science community.

There are some advocates and climate scientists who ask that we ignore the recent failings of the IPCC, because admitting that there is a problem might give succor to skeptics opposed to action. I have a different view. Standing up for climate science means addressing problems, not ignoring them or politicizing them.

I have first-hand experience with the panel’s errors and wrongheaded behavior. In its 2007 report, the IPCC included a graph that showed a smoothed line representing increasing global temperatures since 1970 on top of a smoothed line showing the increasing costs of weather-related disasters. The implication of the graph is not difficult to discern — the increasing costs of catastrophes are related to rising temperatures.

Unfortunately, not only is this implication contrary to all peer-reviewed science on this subject, but the IPCC created this misleading graph from whole cloth, intentionally mis-cited it, and when questioned by an expert reviewer of a draft of the report, falsified information in its much-touted peer review process. When challenged in recent weeks, the IPCC quickly issued a press release calling the claims “baseless” but completely ignoring the substantive issues. In recent days, a leading German scientist went so far as to suggest that the IPCC’s actions on disasters and climate change were tantamount to “fraud.”

The IPCC desperately needs a mechanism for resolving allegations of error in its work.

As with the glacier issue, IPCC stonewalling has proven not to be a sustainable response. In recent weeks, the IPCC author who created the disaster cost graph has explained that it was merely “informal” and that it should not have been included because of its potential to mislead. And mislead it has. Just last week Australia’s climate change minister, Penny Wong, fell prey to the IPCC’s misdirection when she invoked the IPCC press release to explain in error that “the science on the link between these catastrophes and climate change has not been credibly challenged.”

There is however no such link. The book chapter that included the data that served as the basis for the misleading IPCC graph reached a starkly different conclusion than that suggested by Minster Wong: “We find insufficient evidence to claim a statistical relationship between global temperature increase and normalized catastrophe losses.”

A peer reviewer of the IPCC questioned the unsupported allegations in the report, and asked what I, as someone whose work was being questioned, thought about the report’s claim. The IPCC responded to the reviewer that I had changed my mind about my own research conclusions, a bald lie. I have complained to the IPCC about these various issues, only to receive a polite but substance-free response followed by extended silence.

My frustrating experience with the IPCC suggests that it desperately needs a mechanism for resolving allegations of error in its work. Its current ad hoc manner of response encourages the panel to politick by press release rather than undertake a careful evaluation of claims. Imagine how different things might be if the IPCC recognized in a positive manner anyone who found a legitimate mistake in its report, with errata and corrigenda continuously updated. Such acceptance of fallibility would show that the panel is open to close scrutiny and values the accuracy of its reports above all else. This would be a welcome improvement to the defensive and sometimes arrogant attitude demonstrated in recent months.

The IPCC is also in desperate need of putting into place conflict-of-interest policies. It staggers belief to learn that the panel operates with absolutely no mechanism for handling actual or perceived conflicts of interest. Because the IPCC has no requirement for disclosure of potential conflicts, it is likely that the organization itself is unaware of what other potential conflicts may exist beyond those of its chairman, which were raised by several of his critics in the British media.

The IPCC has fallen well short of performing as a credible, trusted, and legitimate advisory body.

To protect institutional integrity, the establishment of such procedures is deemed essential in virtually all expert advisory bodies. For instance, the U.S. National Academy of Sciences (NAS) explains that “no individual can be appointed to serve (or continue to serve) on a committee of the institution used in the development of reports if the individual has a conflict of interest that is relevant to the functions to be performed.” The NAS makes clear that issues of conflict of interest are not about the morality of individuals or the worth of causes that they serve, but are about maintaining trust and legitimacy in the integrity of advice. The parent bodies of the IPCC — the United Nations and World Meteorological Organization — do have conflict of interest policies, but remarkably they do not apply to the IPCC.

The calls for Pachauri to resign miss the larger institutional context. Were he to resign and the institution simply continue as it has, in the absence of implementing rigorous and transparent conflict of interest policies, absolutely nothing would be gained. The IPCC needs to put into place conflict of interest guidelines and then let the chips fall where they may. To suggest that climate science should be free of such guidelines sends a message of hubris that can only serve to undermine trust in its work. If institutional mechanisms to manage conflicts of interest make sense for doctors, journalists, lawyers, and scientific advisors outside the field of climate, then they surely make sense for the IPCC as it informs high-stakes decisions around the world on climate policy.

Efforts to minimize the IPCC’s troubles are likely to further erode public opinion of climate science.

The IPCC also needs improved mechanisms of accountability to its own admirable objectives. For instance, while the IPCC has a mandate to be “policy neutral,” its reports and its leadership frequently engage in implicit and explicit policy advocacy. For instance, IPCC leaders often take public stands in support of, or opposition to, certain policies on climate change, such as when its chairman weighs in on U.S. domestic legislation. The IPCC reports, particularly Working Group III, reflect a particular policy orientation, which is decidedly not “policy neutral.” To cite one example, the IPCC has concluded that the world has all the technology that it needs to achieve low stabilization levels. However, this conclusion ignores a significant body of academic work (such as by New York University professor emeritus Martin Hoffert and colleagues) suggesting that the world does not in fact have all the technology that it needs.

The IPCC also emphasized emissions trading over other policy options, largely endorsing the approach of the Framework Convention on Climate Change. With the Climate Convention in tatters after the Copenhagen meeting last December, we are now experiencing the consequences of the IPCC’s policy myopia and deviation from neutrality, as there are essentially no alternative approaches to climate policy suggested by the IPCC report. It had placed all of its eggs in one basket.

The IPCC is an important institution, but it has fallen well short of performing as a credible, trusted, and legitimate advisory body. Rebuilding what it has lost will take considerable effort and a marked change of course. Some defenders of the IPCC explain that the problems found in the report are only a few of many conclusions, or not particularly important as compared to the headline conclusions. Such efforts to minimize the IPCC’s troubles are likely to backfire and further erode public opinion of climate science, which recent polls suggest has taken a serious hit.

Standing up for climate science means openly supporting reform of the IPCC while underscoring its institutional importance. The climate science community has failed to meet its own high standards. If the IPCC continues to pretend that things will soon get back to normal or that it need only castigate its critics as deniers and skeptics, it will find that its credibility will continue to sink to new lows. It is time to reform the IPCC.