Standing on the shores of Netarts Bay in Oregon on a sunny fall morning, it’s hard to imagine that the fate of the oysters being raised here at the Whiskey Creek Shellfish Hatchery is being determined by what came out of smokestacks and tailpipes in the 1960s and ‘70s. But this rural coastal spot and the shellfish it has nurtured for centuries are a bellwether of one of the most palpable changes being caused by global carbon dioxide emissions — ocean acidification.

It was here, from 2006 to 2008, that oyster larvae began dying dramatically, with hatchery owners Mark Wiegardt and his wife, Sue Cudd, experiencing larvae losses of 70 to 80 percent. “Historically we’ve had larvae mortalities,” says Wiegardt, but those deaths were usually related to bacteria. After spending thousands of dollars to disinfect and filter out pathogens, the hatchery’s oyster larvae were still dying.

Finally, the couple enlisted the help of Burke Hales, a biogeochemist and ocean ecologist at Oregon State University. He soon homed in on the carbon chemistry of the water. “My wife sent a few samples in and Hales said someone had screwed up the samples because the [dissolved CO2 gas] level was so ridiculously high,” says Wiegardt, a fourth-generation oyster farmer. But the measurements were accurate. What the Whiskey Creek hatchery was experiencing was acidic seawater, caused by the ocean absorbing excessive amounts of CO2 from the air.

The region’s thriving oyster hatcheries have had to scramble to adapt to these increases in acidity.

Ocean acidification — which makes it difficult for shellfish, corals, sea urchins, and other creatures to form the shells or calcium-based structures they need to live — was supposed to be a problem of the future. But because of patterns of ocean circulation, Pacific Northwest shellfish are already on the front lines of these potentially devastating changes in ocean chemistry. Colder, more acidic waters are welling up from the depths of the Pacific Ocean and streaming ashore in the fjords, bays, and estuaries of Oregon, Washington, and British Columbia, exacting an environmental and economic toll on the region’s famed oysters.

For the past six years, wild oysters in Willapa Bay, Washington, have failed to reproduce successfully because corrosive waters have prevented oyster larvae from forming shells.
Wild oysters in Puget Sound and off the east coast of Vancouver Island also have experienced reproductive failure because of acidic waters. Other wild oyster beds in the Pacific Northwest have sustained losses in recent years at the same time that scientists have been measuring alarmingly corrosive water along the Pacific coast.

The region’s thriving oyster hatcheries have had to scramble to adapt to these increases in acidity, which pose a threat to their very existence. Some of the largest operations, such as Whiskey Creek, are buffering the water in which they grow their larvae, essentially giving their tanks a dose of antacid in the form of sodium bicarbonate.

While the operation may look modest — a handful of small buildings just yards from the shore of a wide bay — Whiskey Creek is one of the largest suppliers of oyster seed on the West Coast. Its baby oysters are grown all along the U.S. Pacific coast, where the oyster industry is currently valued at about $73 million annually. Washington’s Taylor Shellfish Hatchery — the country’s largest producer of farmed shellfish and one of the largest oyster producers — has also experienced dramatic losses. Its hatchery on Hood Canal, which has had some of the Pacific Northwest’s highest levels of ocean acidification, experienced the loss of about three-quarters of its oyster larvae before the owners began buffering the high acidity. 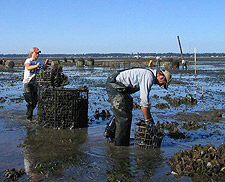 Together, Whiskey Creek and Taylor Shellfish, which also raises clams and mussels, account for most of the West Coast’s commercial shellfish production. Oysters are the biggest product, making up more than 80 percent of the Pacific coast shellfish produced and more than 60 percent of the revenue. According to industry and federal officials, the West Coast oyster industry generates about 3,000 jobs and has a total annual economic impact of about $207 million — significant numbers for their coastal communities.

The situation at the hatcheries has improved substantially in the past couple of years, thanks largely to an ongoing, intensive scientific monitoring effort and to measures to control the pH of seawater in the tanks where oyster larvae are raised. But ocean acidification continues apace, which makes understanding what’s been happening to Whiskey Creek oysters vital to grasping what will eventually threaten every ocean organism that builds a shell or coral branch.

Because of the way seawater circulates around the world, the deep water now washing ashore in Oregon and Washington is actually 30 to 50 years old and absorbed its CO2 long before the fall of the Berlin Wall. This time lag is important because oceans absorb about 50 percent of the CO2 released by burning fossil fuels, emissions that have been rising dramatically in recent decades. According to the National Oceanic and Atmospheric Administration (NOAA) ocean acidity has increased approximately 30 percent since the Industrial Revolution, and if we continue our current rate of carbon emissions, global oceans could be 150 percent more acidic by the end of the century than they have been for 20 million years.

“This problem is real,” says Hales. “There are measurable human impacts.”

Once absorbed by seawater, CO2 undergoes chemical reactions that make the water more acidic, says Richard Feely, a senior scientist at NOAA’s Pacific Marine Environmental Laboratory and an expert in the ocean’s carbon chemistry. The chemical reactions that lower the ocean’s pH also reduce the availability of the kind of calcium carbonate that a variety of sea creatures need to build shells. On a 2007 research cruise along the Pacific Coast from British Columbia to Baja California, Feely discovered that “corrosive waters were everywhere we looked.”

When seasonal wind patterns change in spring, north winds create upwellings of deep and more acidic seawater off the Pacific Northwest coast. These waters — with their lowered pH and lack of available calcium carbonate in the form of what’s called aragonite — are what have been killing the oyster larvae. The availability of aragonite is particularly vital at an oyster’s earliest stages of development. In the first 24 to 48 hours of an oyster’s life, as it forms its first shell, the larvae go from being almost 0 percent shell to at least 70 percent shell before they begin to grow more tissue, explains George Waldbusser, assistant professor of ocean ecology and biochemistry at Oregon State University’s College of Oceanic and Atmospheric Sciences. Lower aragonite saturation means the tiny larvae — much smaller than a poppy seed — need to expend more energy to make their shells.

“If too much energy is used at one stage, they may not be able to survive to a subsequent stage or overcome the stress,” says Waldbusser.

Acidic water sometimes kills oyster larvae outright, so that they fail to survive past the egg stage. At other times, the eggs hatch, but larvae fail after a week or two.

‘If too much energy is used at one stage, larvae may not be able to survive to a subsequent stage,’ says an expert.

“A lot is happening to an egg in the first 24 hours,” says Benoit Eudeline, chief scientist at the Taylor Shellfish Hatchery. “It goes from what’s essentially a blob to a creature with a shell, a digestive tract, organs. The oyster has to use a lot of aragonite to make its early shell and there seems to be a strong correlation between aragonite saturation and survival of larvae at a later stage.”

Waldbusser and colleagues are now researching the impacts of the stress induced by low aragonite saturation — how it may be affecting the oyster larvae’s use of its food reserves, and how it may impact development. “At this stage they’re floating around and eating as much as they can,” explains Christopher Sabine, director of NOAA’s Pacific Marine Environmental Laboratory. “Anything that’s going to take energy away from shell-building is going to cost them.”

In response to the devastating die-off of larvae from 2006 to 2008 — and with the help of Hales, Waldbusser, and other scientists — Whiskey Creek and Taylor Shellfish began a program of ongoing monitoring to help avoid the intake of acidic water. Particularly at Netarts Bay, where the deep ocean water is on shore in early morning, they discovered they could improve pH conditions by varying the time of day they took water into their tanks. A better, less acidic time to pull in water is later in the day, after growth of phytoplankton has been stimulated by sunlight, thus soaking up some of the excess CO2. Buffering the acid also was crucial. A half-million dollars in federal funds has helped cover the expensive work of monitoring and controlling the seawater chemistry.

At the Taylor Shellfish Hatchery, where water takes much longer than it does at Netarts to move in and out of the bay, organic matter — dead algae for example — can build up, die, and become food for bacteria that use up oxygen and further increase CO2 concentrations. This underscores the fact that controlling the flow of excess nutrients into the ocean, such as fertilizers and sewage, can to some degree offset the impacts of growing acidity.

Feely said problems with ocean acidification are also starting to be seen on the U.S.’s Atlantic coast and in Australia. Agricultural runoff and sewage have been taking a toll on the once-thriving oyster business in the Chesapeake Bay, and now rising ocean acidity is further exacerbating the problems of CO2-laden waters there. But for shellfish growers in the Pacific Northwest, these impacts are already too clear. As Bill Dewey of Taylor Shellfish put it, Pacific Northwest oysters may be “the canary in the coal mine.”

Yet on a November morning, with the snow-capped peaks of the Olympic Mountains just visible through the fog, the landscape around Taylor Shellfish looks much as it always has: the sea, the mountains, and a shore lined with fir trees. But as Dewey understands, the green-gray water is changing in a way it hasn’t for eons — changes that will be with us well into the next century, and possibly longer.

“We have to find a way in our industry to adapt,” says Dewey.